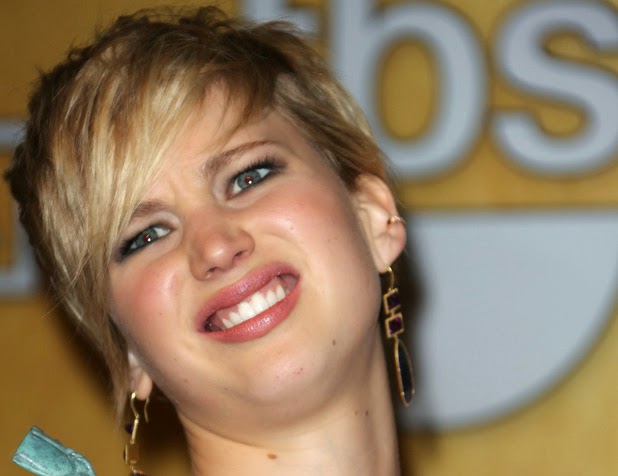 Jennifer Lawrence is a really famous and very beautiful actress. Someone has hacked into her home computer and stolen some images there of her naked and spread them around the internet.

OK so I'm a little behind the times with this post, but honestly, I've been so busy!

If you were cynical, you might consider I was fishing for google hits with the title; I'll be honest, the idea may have crossed my mind. However, I do think this is issue is oxygen that will facilitate discussion of a really difficult and thorny modern problem. And if a few people come across this post and read it while searching for naked pictures of Jennifer, could they conceivably find it helpful?

It is also an issue that was brought to the front of my mind at Buckfast on Monday when Cardinal Pell addressed the prevalence, invasive nature, an insidious effect of internet pornography in our lives and on our society. This has long been a concern of mine not least because the availability of images of naked ladies is something I have to work very hard to not look at. I like ladies, and I have a God given, completely natural, human urge to appreciate them. Of course, the fact that there might be consequences to my capitulation to this particular urge was not discussed with parents or taught to me in school or Church for that matter. It occurred to me on my own that the women in these publications; be it presented to me in The Sun "newspaper" which my father always bought, a dodgy club, film, or some other publication, (now, such fare is most readily available on my computer), were in fact someone's daughter, someone's sister, someone's mother even, and that their fundamental human dignity meant that they must be treated with respect. It was inappropriate to gawp at them naked, despite the reality that I was drawn to do so by my natural inclination.

Shockingly, child pornography is one of the fastest growing businesses online, and the content is becoming much worse. In 2008, Internet Watch Foundation found 1,536 individual child abuse domains.

Fr. Alexander Lucie-Smith has written the best article I have read on this on his blog on the Catholic Herald site. I wonder, do you think it would it be fair to say that, increasingly we see naked bodies as public property? How does this fit in with our perception of feminism?

Fr. Alexander makes some excellent points on this, many of which I think have been long lost in our society today because of the availability of nude and pornographic images.


Respect for the right to privacy is essential in a civilised society. The right to privacy stems from the rights of conscience, that inner sanctuary which no human authority has the right to violate. Regimes that do not respect privacy, such as that described in George Orwell’s 1984, rightly fill us with horror. For if the right to privacy is not respected, what right will be? Soviet Russia was adept at using naked photographs of people as weapons; most who worked for the KGB did so because the KGB blackmailed them. (The successors to the KGB are probably no different.) It is commonly supposed that persons who ascended to power in Russia in the old days and who gained access to their files were horrified to find what was in them. All of us can understand why, without too much of effort of the imagination.

I personally think that it goes much further than this. I think today there is a culture of pornography and masturbation that leads young men to positively evil expectations about their sexuality. These include, but are not limited to the fact that they consider that sexual gratification is something that should be immediately available to them. There is no sense of propriety or of abstinence. The pornography on the internet is often violent, often involves sodomy, involves treating women like objects that are there for sexual gratification alone. This is bad for society. It promotes a culture of misogyny which seems to directly contradict the freedom it purports to represent. It makes sex for men a selfish thing which requires no relationship, no stability and no responsibility. At the 2003 meeting of the American Academy of Matrimonial Lawyers, a gathering of the nation’s divorce lawyers, attendees revealed that 58% of their divorces were a result of a spouse looking at excessive amounts of pornography online. This statistic shows that pornography is also responsible for the break up of marriages. Does this fact on its own not confirm the Church's position that viewing pornography is in fact a form of adultery?


"But I say to you that every one who looks at a woman lustfully has already committed adultery with her in his heart." Mt 5:28

Consider the difference between the beauty and power of our sexual gift used in its proper context: a happy, giving, loving, marital context, and the broken, perverted version of it pornography represents.

I think it is important to state that this is prevalent and insidious. Frankly, it is hard to avoid occasions of sin if you are surfing the internet today, even the Daily Mail has its "column of shame", a salacious list of links that run along the side of whatever story you are reading to tempt you to look at some starlets "new bikini body" or similar (I always wonder what Peter Hitchens thinks about that?). The hardest kind of sin to eradicate in one's life is habitual sin. The mind can justify these actions in all kinds of ways. We can overcome it, but it is not often immediate, it requires grace, prayer and frequent confession. There is plenty of help out there if this post has affected you. Check out some of these sites:

And take the first step; have the courage to go to confession.