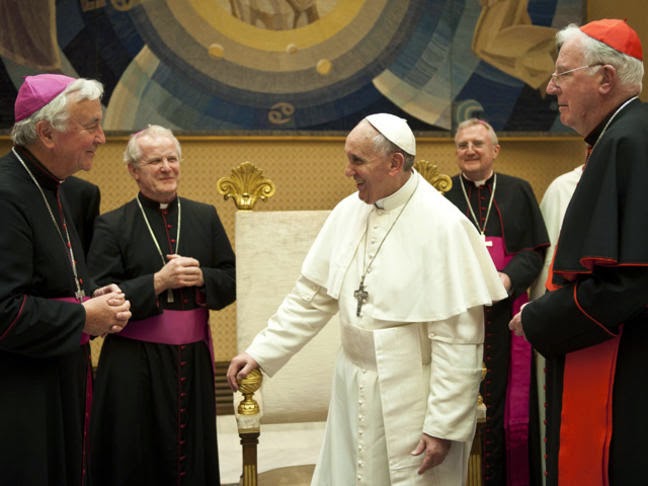 I have only ever criticised one bishop openly on this blog: Kieran Conry. The reason for that criticism was what can only be described as the open hostility he displayed to the Catholic faith it was his job to hold and teach. The reasons for his opposition now appear all too clear. But his admission last weekend leaves many important unanswered questions which must be addressed.

Personally, I have withheld further blogs on Conry in the past because I did not want to be overtly critical, despite my personal misgivings. I was concerned that constantly picking at someone could only cause fracture and pain within the Church.

Now I regret that decision. I regret it because I was right when I smelt a rat, when I felt uncomfortable about Conry and his speeching, about his undermining of Catholic teaching. If I had spoken out, would I have stopped what has happened? Probably not. But perhaps some might have read the evidence presented to them and worked out that Conry was not someone they should be listening to with regard to his perspective on the Catholic Church and the direction it should be taking.

Canonically, we adhere to the law in order to render the organic development of love, grace, and charisms easier in the life of both the ecclesial society and the individual persons who belong to it. Meanwhile, it is clear that abandonment of justice leads to disaster. Disaster and damage for the body of Christ which is the Church, such as we see visited upon it by the actions of Kieran Conry.

Some people seem adverse to speaking about what has happened and are keening about mercy and or gossip. They are wrong. This is not rumour or gossip, this is fact: reported fact. Now it is out in the open and has been admitted by Conry, it is us who are left who have to deal with the consequences. Conry, by his own admission, feels "liberated". More obviously lacking is any sense of justice or sympathy for the families involved, hurt husband, children, extended family, etc. As someone who has lived through an acrimonious parental separation born of paternal betrayal and adultery, I know first hand how incredibly painful such life events are and how their effect continues for years after the actual events.

There are two serious questions that need to be considered and indeed, hammered home. The first is in the context of the forthcoming Synod on Marriage and Family Life and plays out well on the video the Mail posted on the story which is available to view HERE.

Listen carefully to what he says in this video, eg; "many children will not see their parents go up for communion". In the context of the Synod, this is a man with the power an opportunity to influence the Church and at the time of this video it would seem highly likely that he is living a lie and in an illicit relationship. Should someone in this position be involved in even commenting on such things? Does he in fact have a personal agenda which is influencing his perspective?

The second question revolves around the comment in the Mail:


Clare Kirby, the lawyer for the estranged husband, said last night: 'My client is considering pursuing a possible High Court action against the Catholic Church because they've known for years that the Bishop has been having affairs and if they'd taken action he almost certainly would not have lost his marriage and his children would not be having to be brought up in a broken family.'

Damian Thompson is asking the right questions in The Spectator, albeit in his usual, somewhat belligerent style. He acknowledges that Cardinal Nichols didn't know about this affair. Indeed we must remember that it has taken an irate husband who employed a private detective to track his wife's movements to discover the truth. The fact of his affairs, double life, and that he was approached by the Mail in June and simply toughed it out, banking that the allegations lacked suitable evidence to publish post Leveson would allow him to stay in his elevated position, demonstrate that he is very charming and a convincing liar. Despite this, Damian is convinced that there was some sort of cover-up, a conspiracy which served to condone the actions of a senior bishop who was living in contradiction to the teachings of the organisation he was supposed to lead.


In short, are you not worried that what has been revealed in this scandal constitutes ongoing evidence of the 'closed ranks' attitude that protected abusers in the past? If so, surely there are serious questions that need to be answered.

Other posts on this which must be read: