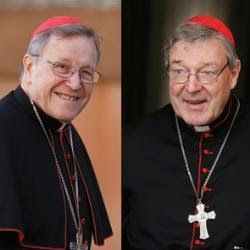 High drama last night as Cardinal Kasper denied the comments he was reported as making about African Bishops on Zenit (as I blogged yesterday). After the interview was published, Cardinal Kasper told German media:

Edward Pentin, an experienced reporter for the National Catholic Register responded by posting the audio recording of the exchange with Cardinal Kasper on his website, along with the following statement:


His Eminence Cardinal Walter Kasper spoke to me and two other journalists, one British, the other French, around 7.15pm on Tuesday as he left the Synod hall.

I transcribed the recording of our conversation, and my iPhone on which I recorded the exchange was visible. I introduced myself as a journalist with the [National Catholic] Register, and the others also introduced themselves as journalists. I therefore figured the interview was on the record and His Eminence appeared happy to talk with us. In the end, I posted the full interview in ZENIT rather than the Register. ZENIT removed the article on Thursday in response to Cardinal Kasper’s denial.

His Eminence made no comment about not wanting his remarks published. It depends on the context, but normally in such a situation, comments are considered on the record unless otherwise requested.

The recording can be downloaded below. A couple of the questions came from the other two journalists and I included them as part of the interview. Some of the quality of the English has also been improved for publication.

If there was a misunderstanding, I apologise, but I stand by the interview that was published as a correct account of the exchange.

Whoops! Cardinal Kasper is a fibber? He also said that a “majority” of the bishops in the Synod are in favor of his controversial proposal to allow divorced and remarried Catholics to receive communion in some circumstances in this interview. However, according to Cardinal Pell only three of the synod’s 10 small groups had supported the proposal. Cardinal Pell said "We are not following the secular agenda", this interview sets the record straight and will provide great comfort to many concerned Catholics, thank God for him! This is exactly how he was when I met him at Buckfast a few weeks ago and that meeting gave me great comfort and peace of heart. Here he is again offering exactly the kind of leadership the Church needs right now and exerting his stable, calming influence over the proceedings concisely and with authority:

Some highlights in there:

“Communion for the divorced and remarried is for some — very few, certainly not the majority of synod fathers — it’s only the tip of the iceberg, it’s a stalking horse. They want wider changes, recognition of civil unions, recognition of homosexual unions,”

“The church cannot go in that direction. It would be a capitulation from the beauties and strengths of the Catholic tradition, where people sacrificed themselves for hundreds, for thousands of years to do this.”

"Wally Kasper has the brains of a sheep"

“If people are heading in the wrong direction, there’s no virtue in the church saying ‘that’s good.’ A lot of people outside won’t accept our views, won’t welcome them, but certainly not the people in the pews, the good people,”

Cardinal Pell says he expects the synod’s final report, currently being drafted by a team of 11 members, would reflect the assembly’s views. But he said that if it did not, the synod would not vote its approval before ending its work Oct. 18.

He also noted that the synod would not issue any document with doctrinal weight, its task being to set the agenda for the world synod on the family scheduled for October 2015.

“Our task now is to ask people to pause, to pray, to catch their breath, to realise there’s going to be no abandonment of Catholic doctrine, and to work to diminish the divisions and to prevent any radicalisation of different factions or points of view,” he said.