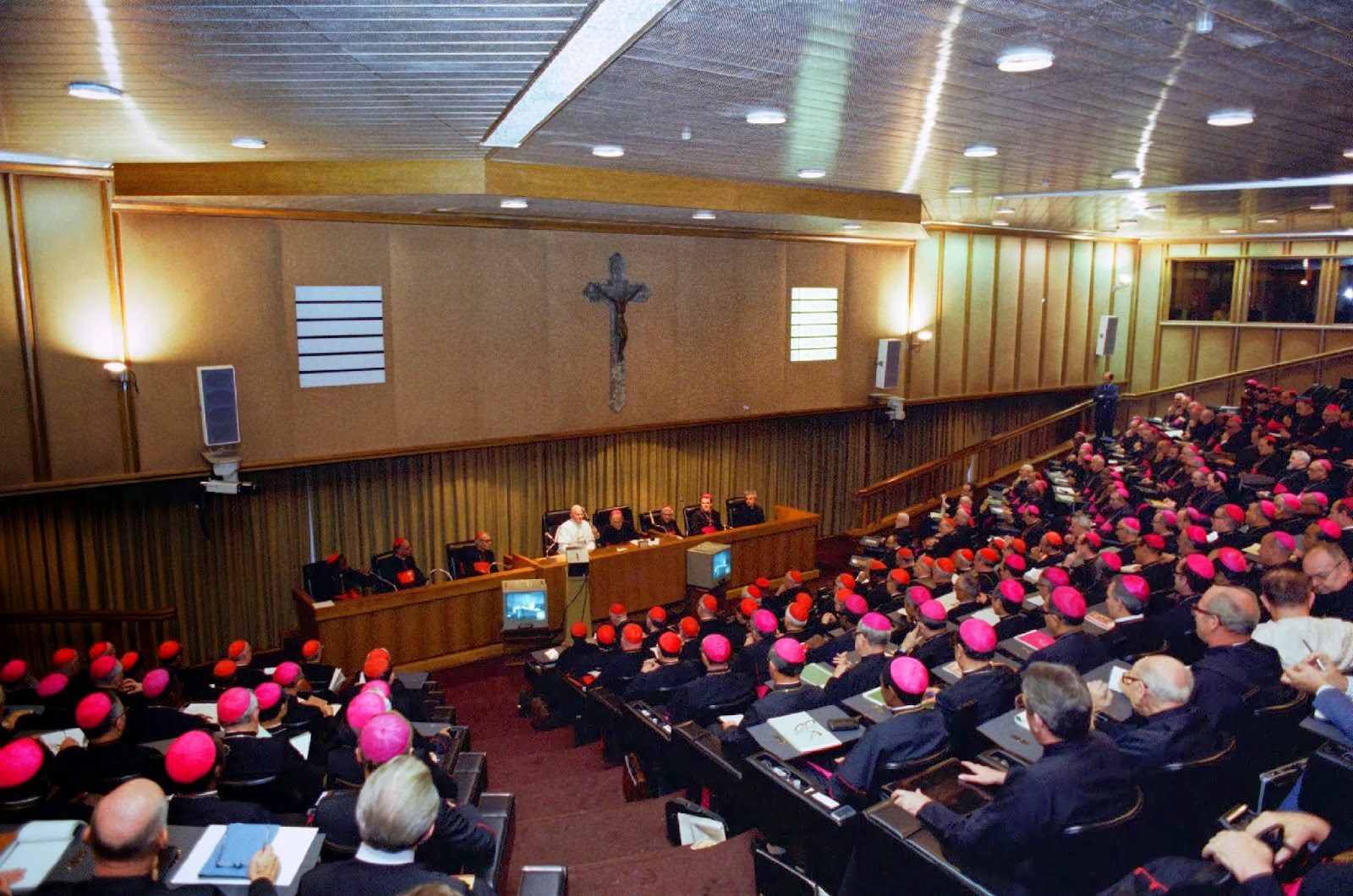 Some clear thinking on the Synod.

1. Firstly, let's be clear that Synods do not have the authority to overthrow either the Decalogue or the Teaching of Christ in the Gospels or the Extraordinary Magisterium.

2. Since they started after Vatican II there have been 25 Synods.

The process is that there is a Synod, then a Document is produced which is filed away in the Curial Offices - and generally ignored. Do you remember what the last one was on? Or the one before that? I have repeated quite often recently that I dearly wish as much attention had been paid to Sacramentum Caritatis, the exhortation that resulted from the 2007 synod. If a fraction of the attention that has been given to this one, had been devoted to that, no doubt we would all be much better off!

In fact Cardinal Kasper has repeatedly stated that he rejects the teachings of the last Synod on the Family in 1980 and Familiaris consortio. But he doesn't seem to realise the illogicality of his position, if he chooses to ignore the Synod of 1980  - which was in conformity with both Scripture and the Extraordinary Magisterium ( i.e. : "Solemnly Defined Doctrine") - why doesn't he see that other people could choose to ignore the Synod of 2015?

3. The actual Synod takes place next autumn: this is just the preparation for the Synod.

Some of the ultra liberals among the Cardinals are already in their 80's and may not even be here in a year.

In the same article Fr Z wonders whether behind the push of some German Bishops for Communion for the civilly remarried, there is a desire to defend Germany’s Church Tax.

He then quotes a letter written by one of Brentwood's finest to the Catholic Herald :

5. More background about the dire state of the Catholic Church in Germany can be gleaned here.

African Catholics are not in favour of divorce, remarriage, polygamy, homosexuality or artificial contraception. Catholic Bishops in Africa are also very well aware that the Anglican Communion has split in two over these matters. I suspect that most Asian Bishops would not be great fans of "Catholic Lite", ACTA or The Tablet either.

The future strength of the Church is in orthodoxy - in Africa and Asia. There is no future in heterodoxy. Just look at the age profile of the ACTA supporters - both lay & clerical.

For an example from my own diocese, you may remember Fr Michael Butler who is Chair of the Liturgical Commission (despite having no qualification in Liturgy) wrote toThe Tablet and to all the priests in Brentwood Diocese encouraging us not to use the "new" translation of the Roman Missal. He was quickly slapped down by our then Bishop, Thomas McMahon and Mgr David Manson (who is a qualified Liturgist) wrote a corrective letter to The Tablet. Fr Butler is 80, one only needs to compare and contrast with the younger members of the clergy to recognise that there is no future in heterodoxy.

7. Pope Francis asked for a no holds barred debate.

So we cannot complain that this is what we have got.

I think that - in the long term - this will separate the wheat from the chaff. But until the dust settles some people will find it difficult to distinguish between the two.

Cardinal Kasper synod on the family