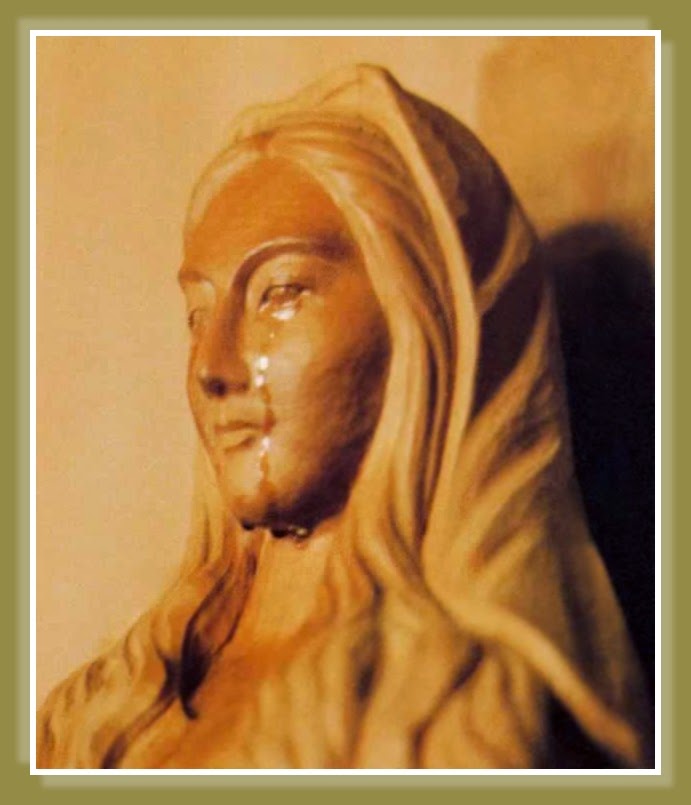 Our Lady of Akita is the title of Marian apparitions reported in 1973 by Sister Agnes Katsuko Sasagawa in the remote area of Yuzawadai, near the city of Akita in Japan. The messages emphasise prayer and penance. Sister Sasagawa stated that the Virgin Mary told her: "Pray very much the prayers of the Rosary. I alone am able still to save you from the calamities which approach."

The apparitions were unusual in that the crying of the statue of the Virgin Mary was broadcast on national television in Japan. The message of Our Lady of Akita is very similar to the Fatima message.


I found it fascinating that this message was given to Sr. Sasagawa 41 years ago yesterday. Especially relevant to the gathering of our bishops at the Synod to discuss marriage and the family.


"As I told you, if men do not repent and better themselves, the Father will inflict a terrible punishment on all humanity. It will be a punishment greater than the deluge, such as one will never have seen before. Fire will fall from the sky and will wipe out a great part of humanity, the good as well as the bad, sparing neither priests nor faithful. The survivors will find themselves so desolate that they will envy the dead. The only arms which will remain for you will be the Rosary and the Sign left by my Son. Each day, recite the prayers of the Rosary. With the Rosary, pray for the Pope, the bishops and the priests.

The work of the devil will infiltrate even into the Church in such a way that one will see cardinals opposing cardinals, and bishops against bishops. The priests who venerate me will be scorned and opposed by their confreres. The Church and altars will be vandalized. The Church will be full of those who accept compromises and the demons will press many priests and consecrated souls to leave the service of the Lord. The demon will rage especially against souls consecrated to God. The thought of the loss of so many souls is the cause of my sadness. If sins increase in number and gravity there will no longer be pardon for them."

Our Lady of Akita synod on the family