The Essential Weapon for the Synod 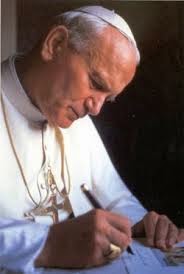 Loving the family means being able to appreciate its values and capabilities, fostering them always. Loving the family means identifying the dangers and the evils that menace it, in order to overcome them. Loving the family means endeavoring to create for it an environment favorable for its development. The modern Christian family is often tempted to be discouraged and is distressed at the growth of its difficulties; it is an eminent form of love to give it back its reasons for confidence in itself, in the riches that it possesses by nature and grace, and in the mission that God has entrusted to it. "Yes indeed, the families of today must be called back to their original position. They must follow Christ." Familiaris Consortio n. 86

One thing I cannot help but wonder about is why, in the run up to the forthcoming Synod on the family, nobody has mentioned a prayerful re-read of Pope Saint John Paul II's masterful encyclical on the family as a starting point?

Familiaris Consortio (On the Role of the Christian Family in the Modern World [1981]) was the Saint's powerful call to his flock to have the strength and courage that he modeled throughout his papacy.

This Apostolic Exhortation bravely sets out mission every married couple and every family in the world today faces. It alerts us to the fact that "the family is the object of numerous forces that seek to destroy it or in some way to deform it" and goes on to reveal strategies for overcoming these forces. It shows a dying society the root of its problems and offers a renewed vision of human life, marriage, and family that will bring healing to a wounded humanity.

Given its urgent call to action, its sense of impending danger, and the fact that the pope himself called it a summa of the Church's teaching on the family, it's strange that this document has remained largely neglected since its publication 30 years ago. When I discovered it, I was blown away by its power and the clear truth it elucidates. It has been a much pondered text for me for some time and one I return to time and time again to deepen my understanding and to find answers to difficult questions.

Why has this masterpiece remained so obscure? Why, as we approach a Synod on the family have we not been encouraged to reflect on this document?

The fact is that the teaching of Familiaris Consortio is incompatible with the secular belief system that has deeply affected our culture. In this work, the Pope demonstrated the way in which two incompatible visions of reality exist. In presenting a biblical vision of man, he challenged the presuppositions of all secular rationalists (whether in society or in the Church) about the nature of man and woman, marriage and the family. In proclaiming "the plan of God for marriage and the family," the Pope called us all to a fundamental conversion, to the "acceptance of the Gospel." Implied in this call is a conversion from the secular to the biblical view of reality.

In this way, Familiaris Consortio stands out in the modern intellectual landscape as a sign of contradiction. While such signs are rarely welcomed, they are, nonetheless, a source of hope.

Familiaris Consortio argues that the answer to the modern crisis lies in recovering the theology of creation as a vital part of any anthropological discourse. The fundamental reorientation toward the Creator facilitates our acceptance of creaturely status and thus humility before the Creator. Only in this way can the vertical dimension to human existence be rediscovered. In this way we can rediscover our wonder at the world (creation) and live in gratitude and humility which recognises the gift which is each life.

Of course, in a post-Cartesian society that literally worships "self," it's extremely difficult to recall people to this, demonstrably saner view of reality – the view that we're not the creators of our own nature. Nevertheless, Familiaris Consortio brazenly proclaims that only in his relationship to God can man (and hence marriage and family) ever come into fullness of being:

"Willed by God in the very act of creation, marriage and the family are interiorly ordained to fulfillment in Christ, and have need of His graces in order to be healed from the wounds of sin and restored to their 'beginning,' that is, to full understanding and the full realisation of God's plan." F.C., n.3.

Human nature, marriage, and family are not social constructs subject to manipulation for the advancement of specific agendas. Rather, they're formed and informed by God's loving plan and interiorly oriented toward Christ. We're called to be faithful to this will – not to any political expediency. This is more than a strategy, it is a battle plan, and in calling us to battle Pope John Paul understands that to overcome, we need to be well armed. Thus he ensures that Familiaris Consortio contains the essential tools we need in order to effectively defeat the destructive hold that secularism has on the modern mind. The document's implicit critique of rationalism is fully developed in Letter to Families where the great Pope teaches us how, at the heart of modern rationalism lies its rejection of the metaphysical dimension.

"Modern rationalism does not tolerate mystery… Rationalism provides a radically different way of looking at creation and the meaning of human existence… What is left except the mere temporal dimension of life?" n. 19.

In the destructive framework of secularist thought, human nature and human acts have only temporary, utilitarian value. Meaning, if attached to any particular phenomenon, is only subjective. Inevitably, in the area of sexuality, the "other" is quickly reduced to a mere object, and the dignity of the human person is lost. The deeper dimensions of the human person, the marital covenant, and the family are incomprehensible to those who think this way. The modern world, having lost the capacity to reject the self-centered secularist framework, has also lost the language of love. Familiaris Consortio counters this by insisting on our essential identity as creatures made in the image of God:
God created man in His own image and likeness… God is love and in Himself He lives a mystery of personal loving communion. Creating the human race in His own image and continually keeping it in being, God inscribed in the humanity of man and woman the vocation, and thus the capacity and responsibility, of love and communion. Love is therefore the fundamental and innate vocation of every human being.

Man is free only insofar as he is faithful to his created nature. Ultimately, he can only know love to the extent that he realises his relationship to God. The Pope showed that at the heart of human nature itself is the vocation to personal love and communion, which is a reflection of, and participates in, the life of the Trinity. This is possible precisely and only because man is imago Dei. It is down to this, our relationship to the image of God, that human relationships possess a meaning far beyond mere biology. Indeed, "the love of husband and wife is a unique participation in the mystery of life and of the love of God himself." F.C., n. 29.

There really is so much of value in Familiaris Consortio one could easily write an extremely long blog post on it! Instead, I will draw your intention to the Pope's conclusion, in which he remarks:

The future of humanity passes by way of the family.It is therefore indispensable and urgent that every person of good will should endeavor to save and foster the values and requirements of the family.

I would encourage you to invest some time in your own reading and prayful reflection on this outstanding document, in order that you might properly discern what is at stake at the forthcoming Synod.

Pope Saint John Paul II, pray for us, for our families, and for the Church! 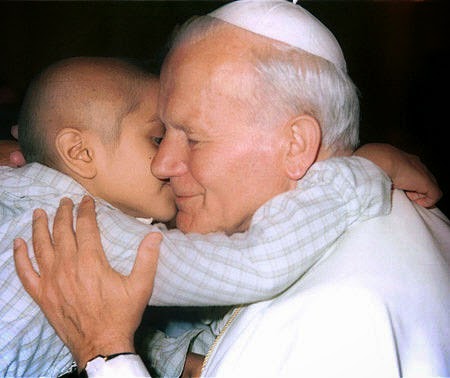 My thanks to my friend Margaret who provided the impetus and inspiration for this post.
Familiaris consortio Letter to Families Pope Saint John Paul II synod on the family