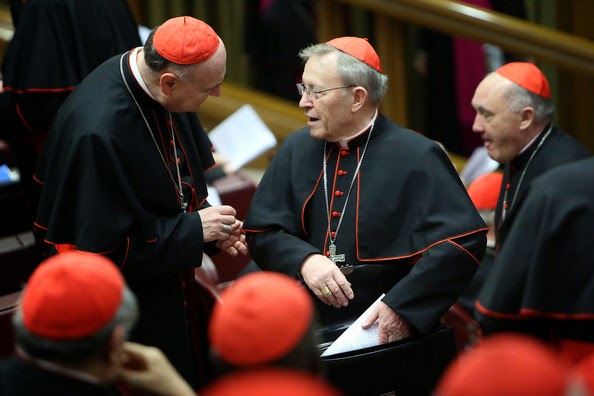 What has struck me about the internet this morning is the way in which it seems to be throwing up to me two opposing views from two Cardinals with respect to the African Bishops at the Synod.

Cardinal Kasper is reported in Zenit as commenting that African Bishops should not be listened to:

ZENIT: But are African participants listened to in this regard?

Cardinal Kasper: No, the majority of them [who hold these views won’t speak about them].

ZENIT: They’re not listened to?

Cardinal Kasper: In Africa of course [their views are listened to], where it’s a taboo.

Maria Madise, Voice of the Family’s coordinator, said: “Cardinal Kasper should apologise for his dismissive remarks about African bishops. His remarks are patronising and discriminatory. Cardinal Kasper’s remarks are similar to remarks he made in 2010, when he said that “when you land at Heathrow [airport] you think at times you have landed in a Third World country”.

Contrast this with Cardinal Dolan's humbling exposition of the powerful experience of the African influence on the Synod:

I found Cardinal Dolan's comment about it being the Church's job to change culture, not to be changed by it, particularly important. I have been fortunate enough to make friends with a wonderful priest from Uganda, Fr. David Sseyenkai, who visits as supply regularly. He has been a great source of wisdom and inspiration to me and I often remark to him that he is the missionary now, bringing his vibrant faith to the old country where people have been so infected with relativism and secular agenda that the transformative and joyful message of the Gospel is broadly rejected.

As I wrote on Tuesday, The future strength of the Church is in orthodoxy - in Africa and Asia. There is no future in heterodoxy. African Catholics are not in favour of divorce, remarriage, polygamy, homosexuality or artificial contraception. Catholic Bishops in Africa are also very well aware that the Anglican Communion has split in two over these matters. I suspect that most Asian Bishops would not be great fans of "Catholic Lite", ACTA or The Tablet either.

It seems to me that Cardinal Kasper, far from being the progressive voice of reason he thinks he is, is actually representative of an old, outmoded, dead way of thinking which has wrought nothing but decline and confusion in the Church in the West, and especially in Germany.

Is Cardinal Kasper and the other German Bishop's push for Communion for the civilly remarried actually about their desire to defend Germany’s Church Tax? In the Zenit interview about he argues for a change on communion for the divorced and remarried based on experience from the crumbling, decadent West which has all but rejected the faith:

I can only speak of Germany where the great majority wants an opening about divorce and remarriage. It’s the same in Great Britain, it’s everywhere. When I speak to laypeople, also old people who are married for 50, 60 years, they never thought of divorce but they see a problem with their culture and so every family has a problem nowadays.

This is a very strange attitude which seems to be the complete reverse of Cardinal Dolan's remarks about faith transforming culture. Rather it is a capitulation before a culture which is rejecting the Gospel. Christianity is in decline in the West and moreover, Cardinal Kasper must accept some responsibility that this has happened on his watch. What is his answer? An amplification of the relativising, capitulating trends that has brought us to this point. Meanwhile, in the parts of the world where the transforming message of the Gospel has a real affect on people's lives, it continues to grow and thrive. When will we begin to drop our arrogance and learn this lesson?

St Paul makes it abundantly clear that anyone receiving Holy Communion unworthily is eating and drinking their own condemnation 1 Cor 11:29. It is an act of sacrilege. The Council of Trent taught that if you have committed a mortal sin, you must go to confession before you can receive Holy Communion again.


“Those whose conscience is burdened with mortal sin, no matter how contrite they may think they are, first must necessarily make a sacramental confession…If anyone presumes to teach, or preach, or obstinately maintain, or defend in public disputation the opposite of this, he shall by the very fact be excommunicated.”

This quotation is from the Council of Trent 13th Session on the Most Holy Eucharist October 11, 1551 - Canon 11 (Denzinger 1661). This is a solemnly defined Doctrine of the Church. In technical terms it is an exercise of the Extraordinary Magisterium. I wonder if anyone has pointed out to Cardinal Kasper yet that he seems to have excommunicated himself?