A Good Appointment in Rome Today! 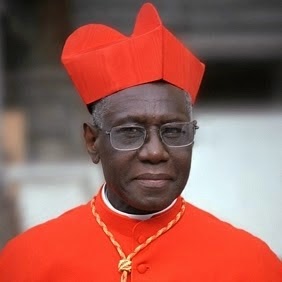 Vatican Radio reports today that His Eminence Robert Cardinal Sarah has been appointed by Pope Francis as Prefect of the Congregation for Divine Worship and the Discipline of the Sacraments. This is a good appointment thanks be to God! Cardinal Sarah is a man of God.

Cardinal Sarah was ordained a priest of the Archdiocese of Konakry in Guinea in 1969 (incidentally, on the very day of the Apollo 11 moon-landing, July 20th), and appointed as Archbishop of that See just over ten years later. In 2001, he was appointed Secretary of the Congregation for the Evangelization of Peoples; since 2010, he has served as the President of the Pontifical Council “Cor Unum.” He was made a Cardinal by Pope Benedict XVI at the consistory of November 20, 2010.

Fr. Alexander Lucie-Smith comments in the Catholic Herald that we can expect clarity and leadership from this Cardinal. Fr. Lucie-Smith goes on to say:

The Church in Africa has a clear and sharp understanding of the division between immanent and transcendent, sacred and profane. Having been to many liturgies in Africa, I have never had the experience I have had in some European countries of attending a Mass that seemed more like a school assembly. This sense of the transcendent and sacred, which permeates the whole of life in Africa, is also seen in an attention to ceremonial that never seems out of place. Recently the Cardinal received the “Summorum Pontificum” pilgrims to Rome, which is most encouraging.

My prayers for His Eminence and best wishes to him on his new appointment.
Cardinal Robert Sarah CDW Congrgation for Divine Worship