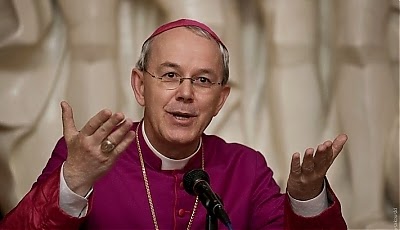 I have blogged before about the wonderful teaching & example of Bishop Athanasius Schneider. I first came across him when his little book Dominus Est! was recommended to me by my Parish Priest. It was one of those books that really changes your perspective, grounded in solid catechesis and deeply personal, it provided me with a profound understanding of the link between the real presence of Christ in the Eucharist and personal devotion and relationship with God. It showed me how developing a deeper relationship with Jesus through this precious gift could change and deepen my faith.

As a pastor & leader, Bishop Schneider strikes me as a sincerely humble man who simply promotes Christ in a heartfelt and authentic way, without any agenda or subtext. His purpose & aim is to make Christ known and loved and to show how living a Christian life is powerful and transformative for us, and for these reasons I find his teaching very nourishing.

Bishop Schneider must come in for quite some criticism for sticking up so strongly for Christ. No doubt he is under great attack. He has given more reason for the devil and his minions to fear and hate him in a stunning interview about the Synod to Polonia Christiana, a Polish Catholic magazine. You can read the whole translation here. I found what he has to say very moving, not because it is anything new or amazingly intellectual, it is simply what the Church has always taught. Amid all the spin and attempts at gradualism and dumbing down, to hear the Gospel preached so clearly still has tremendous power!

Bishop Schneider, Like Cardinal Burke, has no qualms about pointing out the extremely worrying politicisation and manipulation evident throughout the synod process:


“That in the very bosom of the Church, there are people who undermine the teaching of Our Lord became an obvious fact and one for the whole world to see thanks to the internet and the work of some Catholic journalists who were not indifferent to what was happening to the Catholic faith which they consider to be the treasure of Christ. I was pleased to see that some Catholic journalists and internet bloggers behaved as good soldiers of Christ and drew attention to this clerical agenda of undermining the perennial teaching of Our Lord.”


"Catholic families, Catholic young people have to say to themselves: I refuse to conform to the neo-pagan spirit of this world, even when this spirit is spread by some bishops and cardinals; I will not accept their fallacious and perverse use of holy Divine mercy and of 'new Pentecost'; I refuse to throw grains of incense before the statue of the idol of the gender ideology, before the idol of second marriages, of concubinage, even if my bishop would do so, I will not do so; with the grace of God I will choose to suffer rather than betray the whole truth of Christ on human sexuality and on marriage."

The Church's teaching on Marriage & family life is beautiful and powerful. If we learned anything from the crazy pre-synod survey, it was that the problem is, very few people know what Church teaching on Marriage & the Family actually is. Why? Because they haven't been taught it!! The Synod should have provided a springboard for initiatives to make the perennial teaching of the Church accessible, taught, and known by the faithful.

The fact that the devil works best from the inside is of no surprise to me; Judas was close to Christ after all, and Jesus rebuked Peter, calling him Satan! I guess I just despair a little that we can't see this for what it is and call it out. How can anyone, in light of the events since Vatican II, consider that a reversion to a liberal agenda will grow the Church? The most recent evidence is clear: as I blogged recently, insofar as the liberalising and accommodating agenda of the Church of England shows us that the result of removing any objective meaning to faith is oblivion. See the 2015 British Election Study a couple of weeks ago, Which demonstrates that the Church of England is slowly walking down the statistical road to oblivion. Meanwhile, FSSP seminaries are full and they are building new ones and orthodox diocese have been shown to have five times the vocations of more progressively run ones. (see footnote).

So where are we?

Word has reached me from various sources of deanery meetings in disarray as a result of the unclear message of the synod. Congregations are very confused about the message of the Synod and priests are unsure of how that message should be clarified. Frankly, I think it is a disgrace which has set us back years and led to untold confusion, not just among the people, but among the clergy too.

Everyone is desperately trying to enact damage limitation, but the reality is that confusion reigns. The increasingly worrying trend in Rome towards supporting dissent and gagging those faithful to the Magisterium is self evident. Although it is impossible to say what the real reasons are for a list of actions (which some are calling The Vatican's Francis Revolution) most recently characterised by the demotion of Cardinal Burke, but it certainly looks like a purge of orthodox prelates. Some have tried to paint the move as promotion, despite Cardinal Burke's own exclamations of frustration. As Francis X Rocco commented on CNS:


It is highly unusual for a pope to remove an official of Cardinal Burke's stature and age without assigning him comparable responsibilities elsewhere.


Despite this, I have confidence that Pope Francis will not try to change doctrine or morals in the synod next year, he knows it is not something a Pope can do and the orthodox Synod Fathers far outweigh the ageing liberals like Cardinal Kasper. I think Pope Francis will eventually see through the unfaithful Prelates (i.e. those lacking in faith and/ or morals) recognising what we know from the past:

A). A number of German bishops like Cardinal Kasper wish to allow divorce and remarried Catholics to receive Holy Communion motivated not by faith, but by money—see the letter by Fr. Francis Coveney here, which was published in the Catholic Herald.

B). Kieran Conry admits that he did not teach the faith because he did not want to be saying one thing whilst doing another. His ulterior motive was having a number of sinful relationships—whilst remaining a bishop!

C). Some of the bishops and priests who are campaigning for a change in the Church's teaching on homosexuality may also have ulterior motives.

Could some of the bishops and priests who have chosen to ignore the Congregation for Catholic Education's (CCE) Criteria for the Discernment of Vocations (2005) also have ulterior motives? It does make you wonder!

It is well documented--throughout the Catholic world--that vocations exceed all expectations in orthodox dioceses.

Albenga-Imperia in Italy which includes only ten percent of the Catholics of Liguria, has more seminarians than the whole rest of Liguria.

Ciudad del Este (Paraguay) are preparing more than 250 candidates for the priesthood as of 2014.

a survey conducted from 1986 to 1996 by Human Life International (HLI) the results revealed that in orthodox dioceses there are currently nearly five times as many ordinations of diocesan priests per million active Catholics as there are in progressive dioceses.

HLI's report (first presented AD2000.com.au in 1998) showed the rate of ordinations of diocesan priests in orthodox dioceses on a strong upward trend, while the rate in progressive dioceses, relatively low four decades ago, continues to decline. In orthodox dioceses, there were 34 ordinations of diocesan priests per million active Catholics in 1986, and 53 in 1996 - an increase of more than 50 percent. In progressive dioceses, the rate was 16 in 1986, and only 11 in 1996 - a one-third decrease. In the years, since this survey, these trends have continued. See: http://www.catholicmediacoalition.org/vocations.htm#OrthodoxDiocesesProduceFiveTimestheVocations