November 12, 2014
At our last Catenian meeting, our President, Tom Kennedy, read out a very moving letter received by a lady who works in the Legion of Mary office in Dublin from Fr Paul Churchill who is a Spiritual Director of the Legion of Mary. He wrote this letter about his father who was cared for by the sisters at Tuam who were so scurrilously attacked in the media earlier this year (Caroline Farrow has much more detail about this here).
As always, bad news travels fast, and irrespective of how in error or how malicious a rumour is, you can be sure that, by the time the truth comes out, the world has moved on, and the initial attack will have done its damage. Still, I think it is well worth publicising this letter, which gives an honest and appropriate perspective from real experience of Tuam. It is also expressive of the very real pain caused to many by this story.

My father was one of the children reared in the Bon Secours home in Tuam in the 1920s and 1930s, the one in the news recently. Through him I came to know several of the other children who were taken care of by the nuns in that Institution and I still have contact with several of them to this day.

Across my whole life the constant impression I had from my father and these children was that the children were treated well and cared for with much love. Some of them although old still affirm that they were cared for well. Our family has photographs from that time showing them well fed. I know of one case, she is still alive, of a baby on the point of death when she was given to the nuns, and they pulled her back from death. My father never had a bad word about them, indeed he gave me every impression of having felt loved by them and cried over the death of one who had been like a mother to him.

I do recall talk when I was much younger of the angels’ plot. I never heard anything negative about it nor anything irregular about burials and had the impression that there was a sense of warmth and love towards the little ones buried there and that they were buried with dignity.

The recent media hype has had one tragic consequence. Many of the surviving children from the home have been very hurt by the suggestions that the sisters were harsh or uncaring or unloving. When they were abandoned by the society of the time they were welcomed and cared for and loved by the sisters. To hear that the only group who cared for and loved them are now being portrayed as evil women has been a horrible experience for them. They don’t believe that the same women who were so good to them could have mistreated babies as it is suggested. What a tragedy that those who were rejected in their origins by society should find their truth rejected by modern society. They don't deserve that. When something so contrary to truth is portrayed in the media I can think of only one source of this lie. I’ll call it as Pope Francis would: The devil. 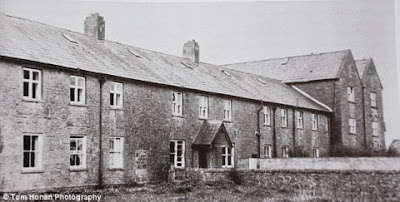