The Holy See Press Office has announced on November 8 that Pope Francis has named Archbishop Dominique Mamberti, the Vatican’s Secretary for Relations with States, as the prefect of the Apostolic Signatura.
Archbishop Mamberti replaces Cardinal Raymond Burke, who has served as prefect since 2008.
Born in Morocco in 1952, Archbishop Mamberti was ordained a priest of the Diocese of Ajaccio (France) in 1981. He earned degrees in civil and canon law and represented the Holy See as apostolic nuncio to Sudan (2002-06), apostolic delegate to Somalia (2002-04), and apostolic nuncio to Eritrea (2004-06). In 2006, Pope Benedict appointed him the Secretary for Relations with States, and thus the Vatican’s “foreign minister.”

As expected, Cardinal Burke, 66, has been named patron of the Sovereign Military Order of Malta, succeeding Cardinal Paolo Sardi, who is 80.
Pope Francis also named Archbishop Paul Gallagher the new Secretary for Relations with States. Born in 1954, Archbishop Gallagher was ordained a priest of the Diocese of Liverpool (England) in 1977. He has served as apostolic nuncio to Burundi (2004-09), Guatemala (2009-12), and Australia (since 2012). 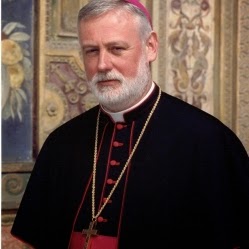 Life Site News have organised an on-line petition to thank Cardinal Burke for his work at the Vatican. I have already signed it.

Perhaps readers of this blog would like to join me in expressing appreciation & offering support?

Although I cannot help but see this as a great blow for the Church, as Cardinal Burke is an intelligent, sensitive, spiritual, and loyal pastor, whose presence will be greatly missed from Rome, from an historical perspective, being patron of the Knights of Malta is a great honour - as the Knights have saved Christendom from pagan onslaughts on a number of occasions.....

Could that in itself could be prophetic? Freed from the constraints of curial duty, could we foresee a future where Cardinal Burke may now use his efforts to greater effect in the Church at large? Time will tell.