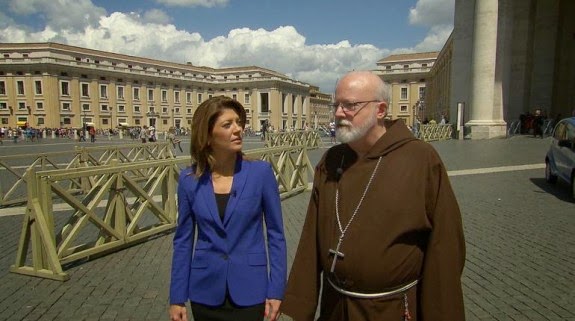 There seems to be considerable fuss this morning over some comments made by Primate of Boston, Cardinal Sean O'Malley's comments on "60 Minutes" on Sunday night.

The usually excellent Greg Kandra posted this on his blog:

I guess I wasn’t the only one who did a double-take when I heard this on “60 Minutes” Sunday night:

Catholics who thought Boston Cardinal Sean O’Malley’s remarks about Kansas City Bishop Robert Finn’s suitability for office were provocative have another interesting comment to ponder: If he were to start a church, he would “love to have women priests.”
In an interview with “60 Minutes” on CBS that producers said took more than a year for them to persuade him to do, O’Malley seemed troubled by reporter Norah O’Donnell’s question as to whether the exclusion of women from the Church hierarchy was “immoral.”
O’Malley paused, then said, “Christ would never ask us to do something immoral. It’s a matter of vocation and what God has given to us.”
“Not everyone needs to be ordained to have an important role in the life of the Church,” he said. “Women run Catholic charities, Catholic schools …. They have other very important roles. A priest can’t be a mother. The tradition in the Church is that we ordain men.
“If I were founding a church, I’d love to have women priests,” O’Malley said. “But Christ founded it, and what he has given us is something different.”


Errr...What is the problem here? We have enough madness at the moment with good Catholics misunderstanding and spreading confusion. Do we really need to make another scandal out of this?

I love what the Cardinal said here. It says, look, it's not about misogyny, it's about Tradition. If it were up to me I would love to have women priests, but we are not not changing it because we hate women: we love women! Women do loads of important stuff in the Church; if it wasn't for women, there would be no Church! The thing is, I didn't found the Church, Jesus did and if he was going to ordain women priests, who better than His Mother? Or Mary Magdalene? But He didn't. He reserved that special alter Christus role for men, just as He reserved the role of child-bearing for women. That is what we have been handed down, and we do not change what Jesus has given us. We try to understand better why He gave it us. Being Catholic is about a deepening real relationship with God, on His terms, not our own.

Coincidentally, isn't it interesting that this story is a source of controversy today, the day the Church of England has formally adopted legislation which means its first female bishops could be ordained next year.
Cardinal Sean O'Malley women priests