This post won't deal with all the problems there are with pornography, but it will attempt to address some. It's got some philosophy in it too. 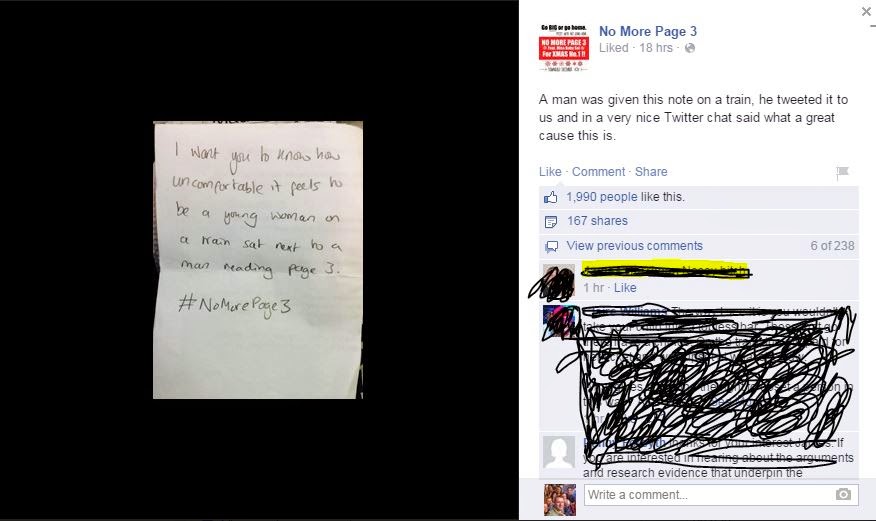 This woman's reaction to page 3 of The Sun makes sense to me, because the subtle normalisation of sexual images in newspapers is implicitly condoning the sexualisation of women. True femenism should seek to dismantle such out dated stereotypes. Instead as Germaine Greer famously laments, her brand of feminism seems to have merely achieved a reality wherein the girls can now act in as inappropriate, drunken, and lecherous manner as the boys. Not much of a step up for society!

There is an interesting argument about prudishness that asks why anyone should be offended by bare boobs. It states that the human body is natural and we should not be embarrassed about it. I agree with that too, but Page 3 is not about that, it is a form of sexualisation. So while I am not prudish or embarrassed about nudity, I do think we as a society need to be careful about the context in which we display our nakedness. This is because, especially for men, nudity is a source of sexual arousal; of lust. Lust is an offence against chastity, a disordered desire for or inordinate enjoyment of sexual pleasure. Sexual pleasure is morally disordered when sought for itself, isolated from its procreative and unitive purposes. (CCC 2351).

But I think there is a difference between nudity and pornography. Pornography is far worse. It consists in removing real or simulated sexual acts from the intimacy of the partners, in order to display them deliberately to third parties. It offends against chastity because it perverts the conjugal act, the intimate giving of spouses to each other. It does grave injury to the dignity of its participants (actors, vendors, the public), since each one becomes an object of base pleasure and illicit profit for others. It immerses all who are involved in the illusion of a fantasy world. It is a grave offense. Civil authorities should prevent the production and distribution of pornographic materials (CCC 2354).

Pornography is insidious in our culture of relativism. Because society has "killed God", to quote Nietzsche, belief in an objective and universal moral law, binding upon all individuals has disappeared, just as he predicted it would. However, rather than producing the nihilism Nietzsche anticipated, "the death of God" in our post-cartesian culture has actually produced a radical relativism which, true to Descartes' maxim, turns towards self for all the answers and seeks fulfillment through analysis of sensory clamourings.

Our pursuit of fleshy distractions has long proven to be ultimately empty. Yet we seem temporally inoculated when it comes to this lesson of history. What we truly seek is another soul to entwine ourselves with, to share ourselves with, to suffer with. Such entwinement, properly conceived results in a foreshadowing of the divine entanglement of Heaven, where we will experience the fullness of our heart's desire: communion-in-love-without-rivarly. It is as such that the Trinity draws human communities, and the Church, to the goal of communion-in-love-without-rivalry: we are to cherish each one's gifts and individuality in the Body in such a way that he or she can "become more him or herself" in the growth of non-oppresive unity. This is the archetype for true relationship, the inter-personal project with The Holy Trinity as the transcendent Archetype of unity-in-diversity.

That reality is something beautiful to aspire to. However, it is important that we recognise that we are all distracted by our appetites. The task is to acknowledge that we fall, that there is good in these appetites properly directed, and to constantly strive to overcome the more base of our instincts and instead to focus on the best we can be. It seems to me that this is the case in much of the field of human endeavour, perhaps most clearly illustrated through the model of our sexuality. Therein we might recognise a broad spectrum of behaviours. At the highest end, we might consider the complete mastery of our sexuality in celibacy. Closely following this, our sharing in the work of the creator in a marital relationship which is exclusive, respectful and open to life. Following the scale downward we can see all kinds of sexual behaviours which have perhaps become more normalised in our society today. At the bottom of this scale, we can recognise sexuality which is deeply sinful, abusive, and damaging.

My experience is that in the absence of clear teaching on this issue, we have to learn, and to look forward and upward at what is beautiful and good, and move towards that, perhaps through trial and error. Proper teaching and discussion would alleviate the need for this error element and hopefully save a lot of pain.

Pornography plays on our weaknesses especially today in how easy it is to access. Indeed many would say that we are surrounded by over-sexualised images even if we seek to avoid it.

Emma offers 10 important points which help us to understand the prevelance of this problem and the reality of it:

6. Even if you don’t seek it out, soft-porn is an unavoidable feature of modern life: from women’s magazines, to perfume and TV advertising. From genital waxing to bedroom expectations; it’s shaping how we see our relationships and ourselves.

7. Pornography is not an expression of sexual freedom. It’s about economics and profits, (a global industry worth $96 billion in 2006).

9. If you’re anti-porn, the world thinks you’re anti-sex. I’d suggest the very opposite: and as Christians, our responsibility is not just to oppose what we see as negative, but teach a biblical and positive view of sex.

10. This is about more than just downloading an accountability filter. Simply using an internet block will not change the internal struggles or issues that pornography raises.

I think these are important points that make us think. It is getting to the point where even if you think this has nothing to do with you or your family, it likely does. You may have to inform yourself with facts like this and talk to your children about it, because if you don't, you are risking the fact that society is pushing this stuff as something everyone does, something normal. And it appears nearly everyone does!