Wondering how to reignite the faith in the West? Study André-Joseph Léonard

November 15, 2014
The Catholic Herald reported yesterday that the new Archbishop of Sydney has said that by the time of his retirement he wants a Church filled with vocations to the priesthood and religious life.


“What will this Archdiocese look like when, God willing, I retire in 2035? My hope is for a Church in which the Gospel is preached with joy, the wisdom of our tradition mined with fidelity, the sacraments celebrated with dignity and welcome, and the seminaries, convents and youth groups are teeming with new life.

“That will depend hugely on three factors: our clergy and religious; our families; and our young people.”

If this is a goal the Archbishop truly wants to achieve, some simple research would suggest that the best way to get there is quite simple: be Catholic.

In my blog on Bishop Schneider the other day, I mentioned that vocations from more orthodox dioceses outstripping others by 500%. A little research on some of the most well known orthodox diocese bears this out in extraordinarily stark relief:

2014 figures from Frejus-Toulon shows 60 candidates for 2014 out of a population of 660,000 Catholics according to Wikipedia.

Albenga-Imperia in Italy which includes only ten percent of the Catholics of Liguria, has more seminarians than the whole of the rest of the region.

Ciudad del Este (Paraguay) are preparing more than 250 candidates for the priesthood as of 2014 from a population of 590,000 Catholics.

In Sherry Weddell's book, Forming Intentional Disciples, she explains how the twin parishes of the Fowler-Westphalia, MI as well as Christ the King in Ann Arbor - both in the Diocese of Lansing at the time of writing (2011) were responsible for 37% of all Lansing's seminarians.

So what needs to be done to engender more vocations from our dioceses? A look at Archbishop André-Joseph Léonard could be instructive in this regard. He is the Catholic Primate of Belgium, who took over from Cardinal Godfried Danneels in 2010. In four years, he has been responsible for a surge of priestly vocations in the country, as reported in First Things by Filip Mazurczak yesterday.

Mazurczak reports how Cardinal Danneels was certainly part of the reason for the decline. He publicly questioned the Church’s teachings on the ordination of women, homosexuality, and contraception, and, in this period, Belgian Mass attendance fell to between 5 and 10 percent. Belgium was among the first nations to legalise abortion on demand, euthanasia, and same-sex marriage—with little Catholic opposition. Priest shortages became endemic. Once a world capital of Catholic learning, the Catholic University of Leuven today makes Georgetown look like Ave Maria.

Who is going to commit their life to an ideology they do not believe in? I would be worried that, if the unchangeable teachings of Christ, the deposit of faith, has no value, the only people who are going to want to be priests are those with ulterior motives. Men become priests because they believe in the teachings of Christ as held and taught by His Church.

During the 2005 conclave, Danneels was the top papabile “progressive” Catholics dreamed of seeing in white on the balcony of St. Peter’s Basilica. However, a couple years later his reputation declined as it was revealed that he knew of the sexual abuse of children by priests in his diocese, yet did nothing.

Mazurczak continues: when Archbishop André-Joseph Léonard succeeded Danneels as primate of Belgium in 2010, he made immediate changes. Not since the 1960s has the Belgian Church been so vocal. When Belgium recently legalised child euthanasia, the Archbishop implored his faithful to pray and fast against the measure. On February 6th, the day Belgian’s Parliament voted on the measure, Léonard organised prayer vigils on the streets of every city in the nation, hoping that the sight of thousands praying against this travesty would move the deputies’ consciences.

Léonard revived traditional Catholic piety, too, quickly introducing the first Eucharistic procession on Corpus Christi in Liège since 1970. He celebrates the Latin Mass regularly, offering it as a remedy to the liturgical abuses of recent history.

He has formed the Community of the Holy Apostles, which consists of three priests and seven seminarians who base their philosophy on the spirituality of Rev. Michel-Marie Zanotti-Sorkine, a French luminary of the new evangelization. They wear cassocks (a rare sight in the post-Conciliar Belgian Church) while talking to Belgians about God. Last month, the community saved from deconsecration St. Catherine’s parish in central Brussels that was closed three years ago due to a lack of priests. Not long ago, St. Catherine’s was to become a fish market; now, it is the seat of one of contemporary Europe’s most dynamic groups of evangelists.

Many remain unenthusiastic about Léonard. When he became the country’s primate, Belgium’s health minister contrasted him with “open” and “tolerant” Danneels, claiming that his election threatens the separation of Church and state. (Ironically, the fact that a government official wants to impose what kind of bishops should be elected smacks of Josephinism). In 2011, homosexual activists threw pies at Léonard during a lecture. Who can forget the Archbishop's gentleness and humility when, whilst giving a pro-life lecture at the University of Brussels last year, radical feminists doused him with water. Léonard started to pray and blessed his attackers: 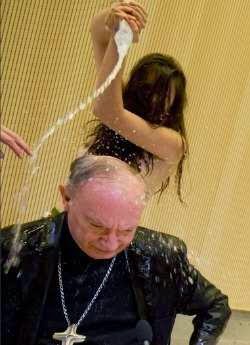 Despite such attacks, Belgian Catholicism has started to show signs of growth for the first time in many decades. The numbers speak for themselves: in the 2012/2013 academic year, the number of Belgian seminarians has grown from sixty-seven to eighty-nine. When Léonard was bishop of Namur, the number of vocations mushroomed there, too.

Another related article on CNA reports on a study commissioned by the U.S. bishops. For more than three years, a working group at the bishops’ conference has conducted research aimed at finding ways to more effectively communicate the Catholic faith. The research examined “Catholics in the pew,” looking at why they accept or disregard Church teaching on various subjects. Surveying different segments of the Catholic population offered a portrait of the Catholic landscape, and some of the different motivations, challenges and desire facing people in the Church.

As one could easily anticipate, young adults surveyed “simply identified the rules as ‘to be nice to everyone, the Golden Rule’,”
“They feel completely Catholic even while disagreeing with the Church. We often heard ‘the Pope is entitled to his opinion’,” Archbishop Thomas Wenski of Miami stated, summarising responses given by young people to a survey conducted on behalf of the U.S. bishops.

So what have we learnt? Basically, the faith has not been effectively communicated for forty- odd years. Young people have a cultural affiliation with the Church and acknowledge that God is real, but this is almost exclusively on their terms.

Our beleagured clergy are more concerned with being liked and not being criticised, than preaching the Gospel which does not bring peace, but a sword (Mt 10:34). If the Gospel does not challenge us to question how we live our lives, it has no power. Christ turned the world upside down with His message in just 3 years.

The lack of connection between faith professed (the Creed), faith celebrated (Liturgy and the Sacraments), faith lived (our moral life in Christ) and faith prayed (Prayer and the Our Father) is one of the biggest issues in modern catechetics. If we do not know who God is, and who we are as God's beloved, called to share in the divine life through the Sacraments, then morality can often come across as remedial or arbitrary, rules that one can pick and choose as one likes, rather than the freeing instructions for a happy life they actually are. In essence, Catholic morality is not by nature oppressive; nor is it in principle conservative, rather it seeks to educate for growth.

That is why following the structure as well as the content of the CCC is profoundly important in catechesis. If we do not understand why we believe what we believe, the Sacraments, moral life in Christ and prayer do not make sense. It is like building a house. If the foundation is shaky, the house will not stand. It is one of the reasons why catechesis at all ages should follow the structure and content of the CCC in an age-appropriate format and why the GDC recommends catechesis be a "a school of faith, an initiation and apprenticeship in the entire Christian life" (GDC 29).

As vocations dwindle due to relativism and progressive attitudes by our prelates, we have to ask why some clergy are so reticent to teach the truth of the faith? Are they personally compromised like Kieran Conry?

The solution, based on evidence from around the world seems blindingly simple. Be Catholic. Restore the faith we all recognise as Catholic. Hold it, teach it, live it, and the Holy Spirit will do the rest!