On Monday night I was fortunate enough to be able to attend a heavenly liturgy at the Church of Our Lady Immaculate, New London Road, Chelmsford. It was the first Mass said in the Extraordinary Form by our diocese' newest ordinand, Stephen Morrison, o.praem., who was ordained to the sacred priesthood on Saturday.

The presence of the Norbertine Order in Brentwood Diocese has been a source of great joy and many blessings for all faithful Catholics. I have heard nothing but praise from clergy & laity alike for the White Canons who have enhanced the beauty of our faith and formed a centre of sound teaching in Chelmsford. Their young Prior, Rt. Rev. Hugh Allan, is an inspirational priest, respected by all. He exudes priesthood, it is everything he is about. He is an excellent preacher and spiritual director, as well as being great fun. No wonder he leads an order that is so respected.


The Norbertines are a monastico-canonical order which traces it's foundation to before 1121. Formally known as The Canons Regular of Prémontré, the Norbertines were founded by St. Norbert at Prémontré where they based their lives on that of the first apostles of Our Lord.

The five particular ends of the Norbertine Order are: Laus Dei in choro (the singing of the Divine Office); Zelus animarum (zeal for the salvation of souls); Spiritus jugis pœnitentiæ (the spirit of habitual penance); Cultus Eucharisticus (a special devotion to the Holy Eucharist); Cultus Marianus (a special devotion to the Blessed Virgin, mostly to her Immaculate Conception). Thus to be present at such a special Mass, on the occasion of the order's patronal feast, was a real privilege.

This priviledge was only heightened by the sublime liturgy; the music included Victoria, Elgar, Palestrina, Gregorian chant propers, and a specially commissioned Marian motet sung by a visiting choir sponsored by The Latin Mass Society, under the direction of the wonderful Matthew Schellhorn and our Vicar General, Mgr John Armitage, preached inspirationally on the Immaculate Conception. 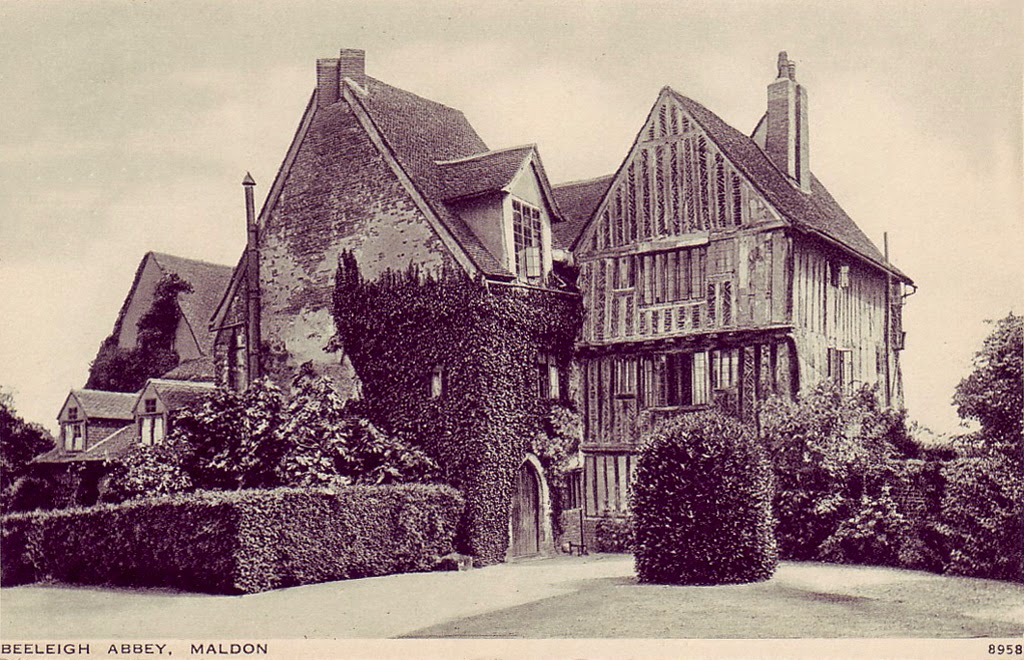 The order actually has a long history in the county, the priory in Chelmsford is less than ten miles from Beeleigh Abbey, one of the pre-Reformation Norbertine houses. Before 1172 Robert de Parndon had established a house for canons from Newhouse in Lincolnshire in Great Parndon. In 1180 this house was transferred to its location near Maldon. The abbey obtained a royal charter from Richard I in 1189. The heart of Saint Roger of Beeleigh (Roger Niger) - a thirteenth century Bishop of London was buried at Beeleigh and the abbey became a pilgrimage site. In 1289, pilgrims included King Edward I and Queen Eleanor. The abbey's population ranged from 9 to 13 canons. From Beeleigh parishes were served in Ulting, Maldon, Great Wakering and Steeple St. Lawrence. The abbey was suppressed in 1536, though most of the buildings survive to this day. The abbey is now in the ownership of the Foyle family, founders of the famous bookshop in Charing Cross Road, London.


I first met Fr. Stephen a few years ago when I was invited to a gathering of his family. Since then, I have bumped into him, and his parents on numerous occasions, always with great joy. I last met his mum and dad at Buckfast Abbey where they were supporting The School of The Annunciation. As a young, intelligent Catholic, Fr. Stephen has been an inspiration to me and a great example to my sons. He is one of those people born to be a priest, the family tell stories of him saying the Mass as a child, with the younger cousins as altar servers. What a tremendous day for him and the family Saturday must have been. The culmination of a great deal of work and ambition. Of course, for Fr. Stephen, the work now really begins!

One thing that always strikes me on these occasions is how like a wedding it is. A member of Fr. Stephen's family remarked on this to me on Monday night. This was their first ordination, and they were so overjoyed and moved by the whole experience. It really is so exciting and joyful!

Fr. Stephen is another example of the direction the priesthood is going: toward orthodoxy, shunning the relativism of the 20th Century and recognising the faith is about truth and the proclamation of that truth. Thank God for him and may the Almighty bless his work as a priest with many graces! 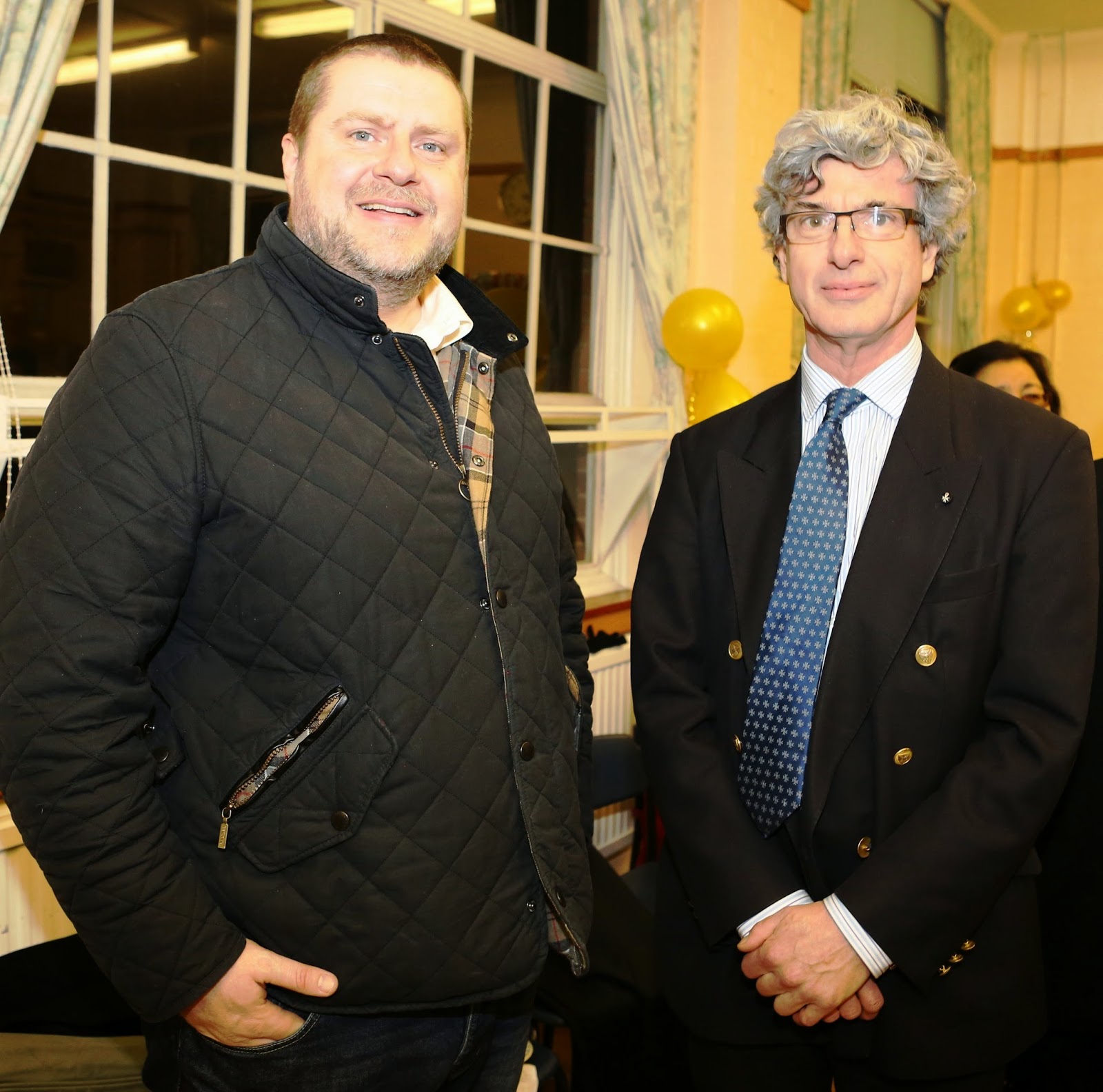 We also had the wonderful Fr. Lee Bennett (Holy Family, Benfleet) and Fr. Anthony Homer (Chaplain at St. Thomas More, Chelsea) of the Ordinariate of Our Lady of Walsingham there. Here I am pictured with them and Fr. Stephen's Auntie Amy who is a dear friend. Yes I do feel like I am in Munchkin Land! 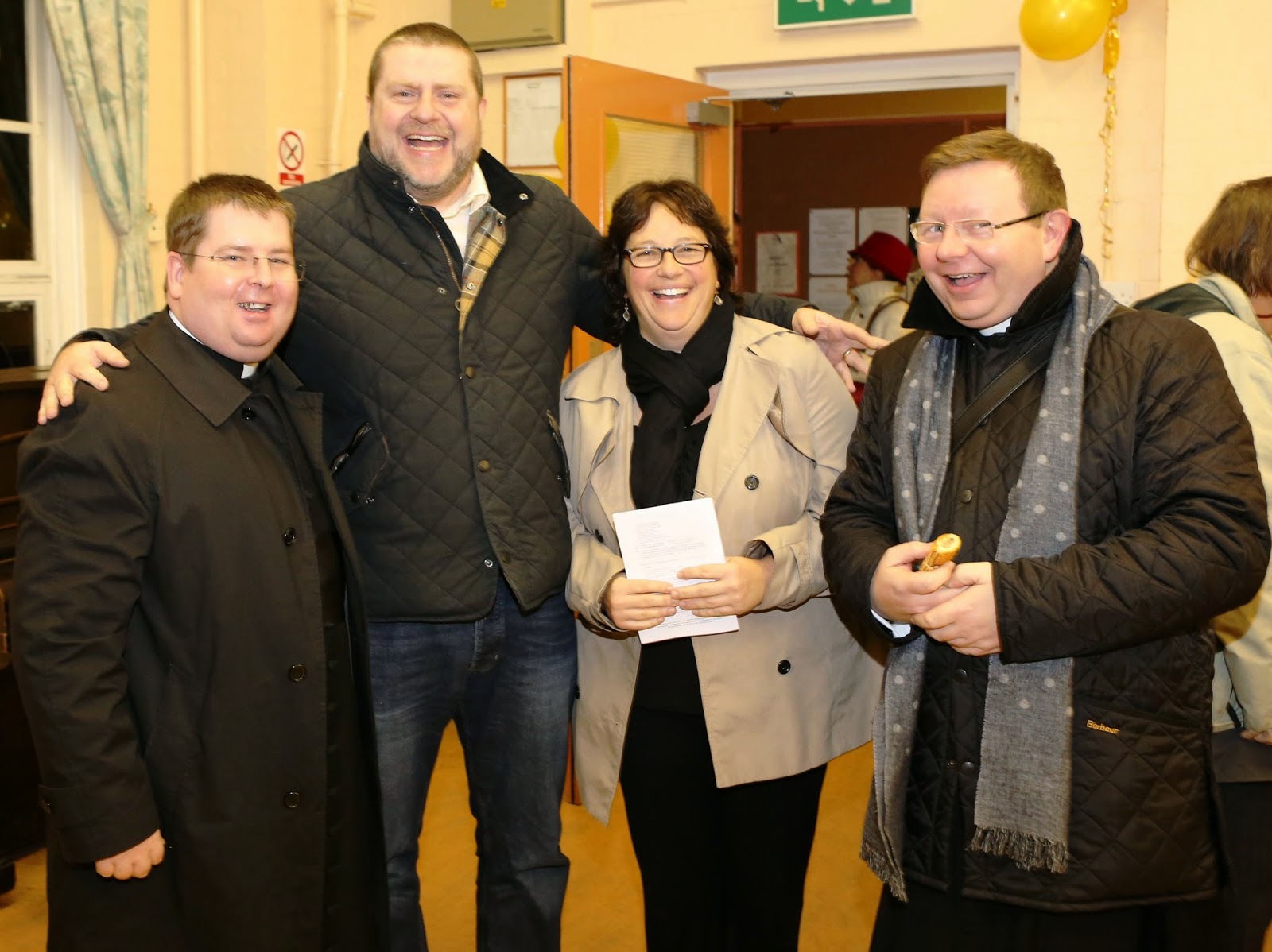 Dr. Joseph Shaw, Chairman of the Latin Mass Society was also there. I have been fortunate enough to get to know Joe on Twitter over a number of years and also follow his excellent blog with interest. It was a great pleasure to meet him finally in person. I have joined the Latin Mass Society myself because since Summorum Pontificum afforded me the opportunity of experiencing the Mass of Ages I have fallen in love with this beautiful expression of the Liturgy of our Church.

Latin, the ancient hieratic language of our Church must be preserved because "It behoves all of us to preserve the riches which have developed in the Church’s faith and prayer, and to give them their proper place." (Pope Benedict XVI, Summorum pontificum). If these traditions, and the riches they contain, were to be lost, the Church as a whole would be impoverished. Also note the age of the ordinand. It's what the yoof want! And we find an ever increasing number of young Catholics involved with the society and going to Masses and events organised by it! 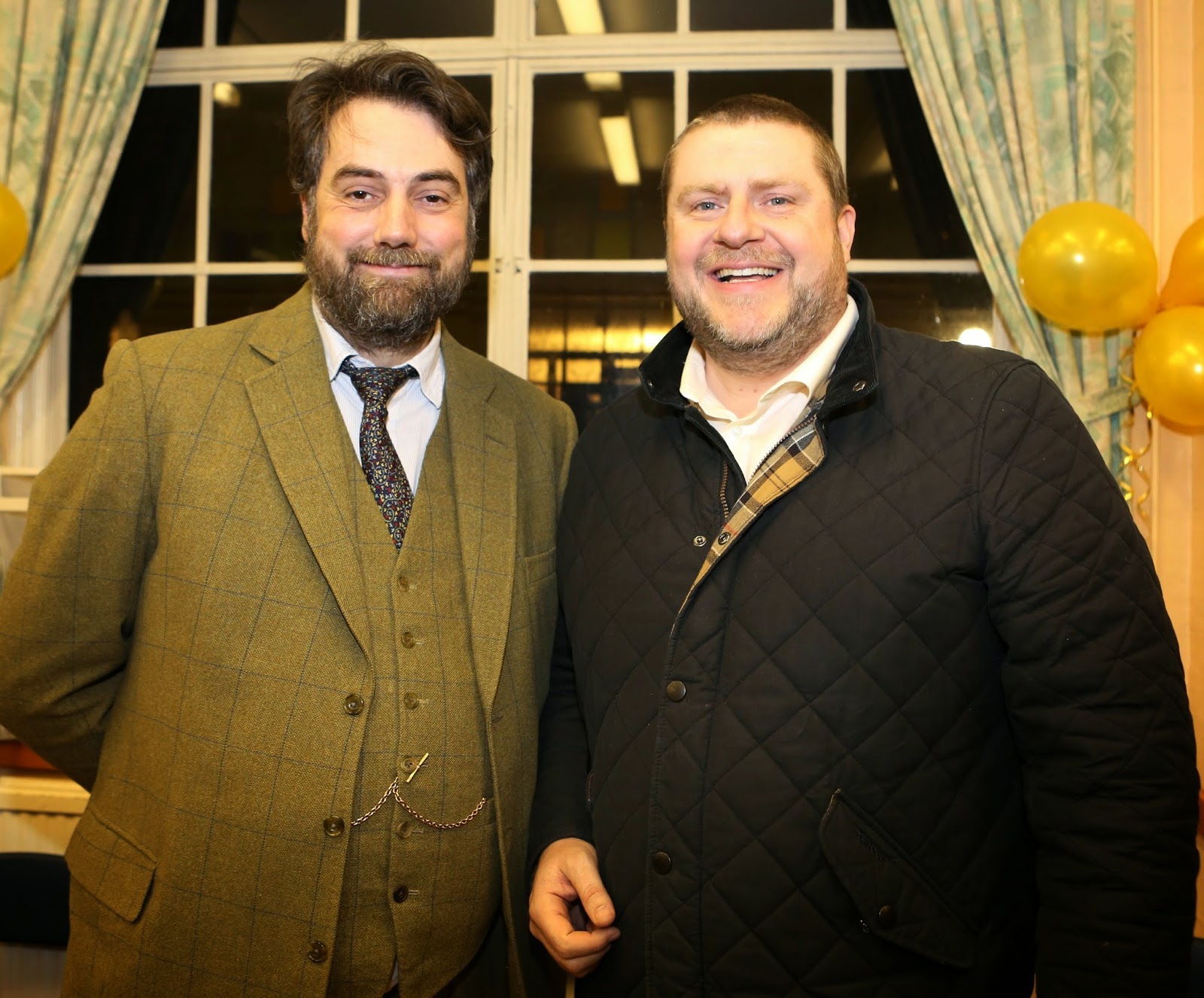 Of course the weekend has been all about this young man, Rev. Stephen Morrison, and his journey to a life of service which he now begins in earnest.

The gift of self that constitutes Fr. Stephen's decision is mysterious and powerful to me. I feel somewhat in awe of it, humble and grateful. I recall the words of Pope St. John Paul II in Valencia, Spain, on November 8, 1982:


"His calling is a declaration of love." Your response is commitment, friendship, and love manifested in the gift of your own life as a definitive following and as a permanent sharing in his mission and in his consecrations. To make up your mind is to love him with all of your soul and all of your heart in such a way that this love becomes the standard and motive of all your actions. From this moment on, live the Eucharist fully; be persons for whom the Holy Mass, Communion, and Eucharistic adoration are the center and summit of their whole life. Offer Christ your heart in meditation and personal prayer which is the foundation of the spiritual life." 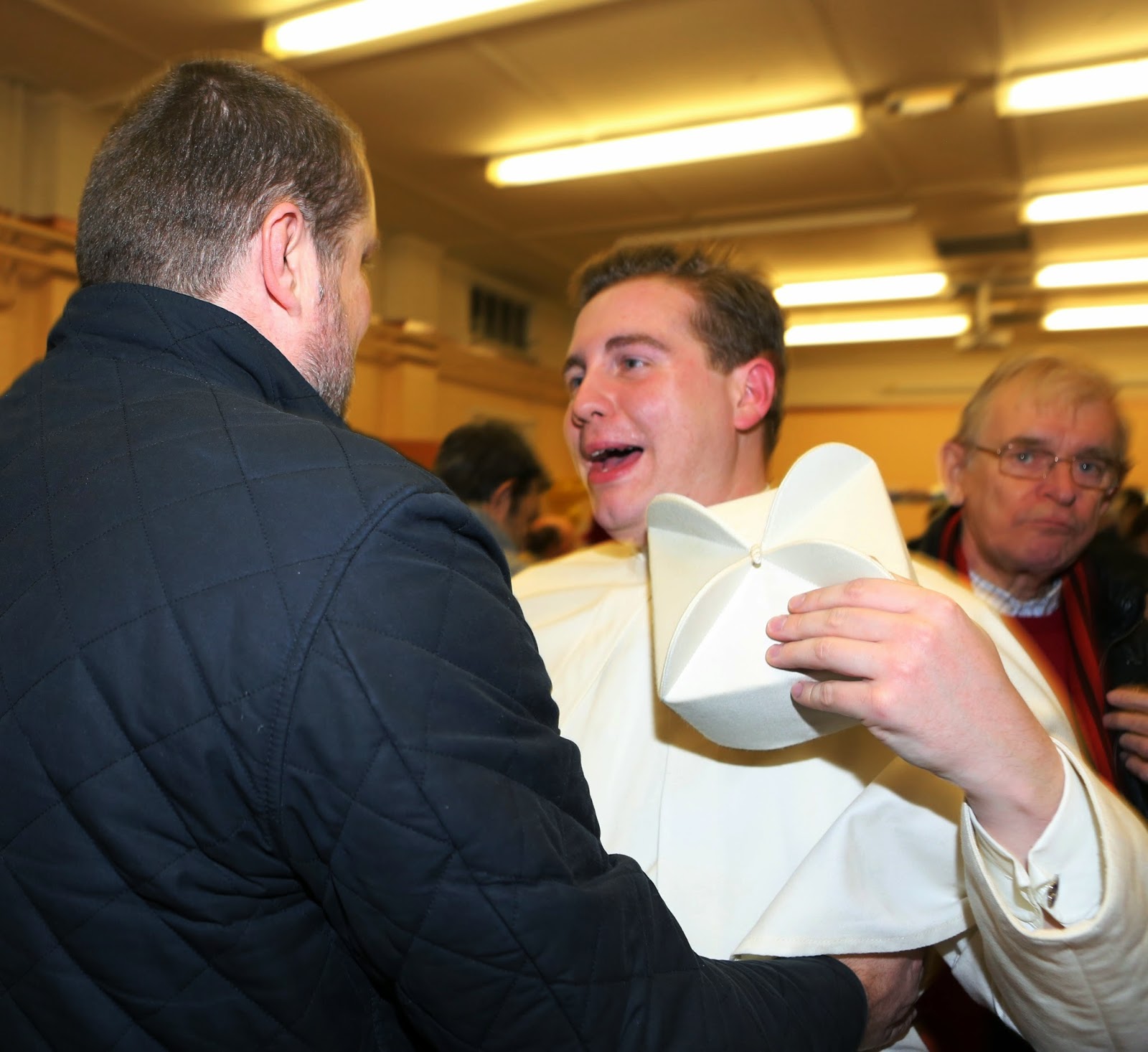 God bless you as you begin your work in earnest Fr. Stephen. Ad multos annos!