+Mark Davies—Vocation and Mission of the Family. 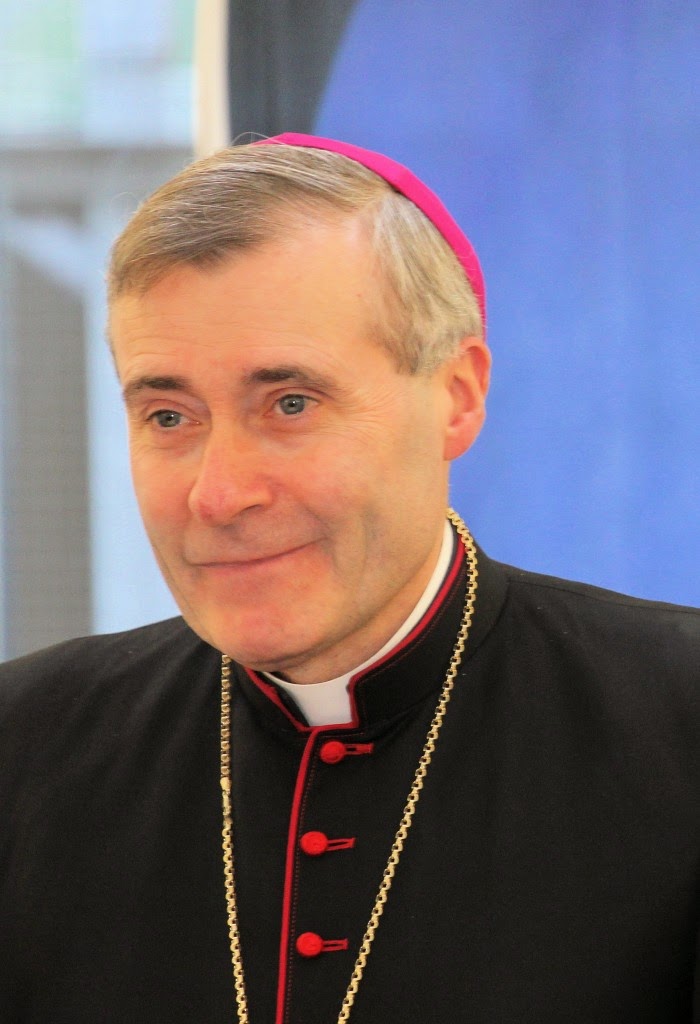 I was greatly heartened to read the pastoral letter from the Bishop of Shrewsbury, read out on the Feast of The Holy Family on December 28th. It presents a wonderful synthesis of Church teaching on family and asks that we look deeper at the gifts that the Church presents to us in this regard and reflect how we can engage more deeply with Church teaching. I have hi lighted some of the bits that really caught my eye:

My dear brothers and sisters,
I write to you today in the light of the Child born for us, the Saviour who was given to us within the love and unity of a human family. On this Feast of the Holy Family, as we celebrate the holiness of family life and begin a “Year for Vocations” in the Diocese, I want to reflect on the “Vocation and Mission of the Family.” This is the title Pope Francis has given to the Synod of Bishops to take place in the New Year. It will be a year for Catholics across the world to reaffirm our faith in God’s plan for the family, and to do so amidst the many challenges confronting the holiness of marriage and the life of the family today. In a few, simple words I want to affirm what the Church has always believed about marriage and the family. We believe marriage is no human invention but that “God himself is the author of marriage.” The Catechism of the Catholic Church explains: “the vocation to marriage is written into the very nature of man and woman as they came from the hand of the Creator” (CCC 1603).
After the Fall of Humanity marriage would bear the marks of sin, but Christ Himself restored this Divine calling, raising it to the dignity of a Sacrament. To the astonishment of a people who practiced divorce, Jesus reaffirmed that the union of marriage is indissoluble. “What God has united,” Our Lord tells us in the Gospel, “man must not divide” (Mt. 19:6). We believe that this unbreakable union of man and woman provides both the foundation of the family and becomes for all the image of the unfailing love of God. This is no small claim to make! St. Paul declares this to be “a great mystery … in reference to Christ and the Church” (Eph. 5: 32).
We believe that the union of husband and wife, expressed in the union of one flesh, must always be open to new life, to the children God may entrust to the couple. We believe sexual relations belong within marriage alone. And we believe we are all called to chastity according to our state in life. Indeed, it is by living the beautiful virtue of chastity that we ensure we use this gift of sexuality in accord with God’s purpose. We believe that, as is true of the Sacrament of Matrimony, both virginity for the sake of the Kingdom of God and apostolic celibacy are also God’s gifts. We believe that these callings – to marriage, to consecrated virginity and to apostolic celibacy – inseparably support each other. Let us be filled with wonder and gratitude for God’s plan and purpose in marriage and family life; in the beauty of chastity; in the joy of consecrated virginity and apostolic celibacy. It is God’s grace that makes it possible for us to live these vocations faithfully; and if we fall short that same God-given grace heals us, making it possible to set out once again on the path of conversion.
In the year ahead, Pope Francis invites us all to make a “true, spiritual discernment” in the light of our Catholic faith. To “discern” means to make a right judgment. Pope Francis has made it clear, contrary to many stories circulating in the media, that the Church does not function like a parliament, nor can truth be determined by opinion polls. The Church seeks to live subject to God’s Word, certain that the light and beauty of truth – despite our fallen nature – can be recognised by the conscience of every man and woman. In order to assist this spiritual discernment the Bishops of England and Wales have produced a leaflet, entitled “The Call, the Journey and the Mission.”In considering the questions contained in this leaflet, you may wish to write in and share the fruits of your own reflection on how we give witness to the Gospel of the Family. This will contribute to the wider discernment within the Church in the year ahead. And so, today, let us pray in the words of Pope Francis: “Jesus, Mary and Joseph, in you we contemplate the splendour of true love, to you we turn in trust … Holy Family of Nazareth make us once more mindful of the sacredness and inviolability of the family, and its beauty in God’s plan.”
May the New Year, 2015, lead us to give renewed witness to the Gospel of the Family. I send this message with my blessing for you and for your family.
+ Mark
Bishop of Shrewsbury


I think Bishop Mark is providing a template for episcopal practice here. It is an absolutely brilliant letter which reaffirms the consistent teaching of the Church and helps to explain it. This is in contrast to the current trend which seems to be about introducing ideas which contradict or obfuscate Church teaching, or hint at other conflicting meanings. Such hypocrisy is incredibly unhelpful and patronising and only serves to turn intelligent people off, and discerning people away. Although Jesus fought determinedly against the dogmatisation of a casuitical tradition, he stood firmly rooted in the foundation of Old Testament faith, that is, in the foundation of the Law and the Prophets. This reality, even apart from content, seems to me to offer a most significant insight with regard to structure; and therefore should prove instructive to our episcopacy. Jesus did not present Himself as something totally new, He was and remained a faithful Jew; He linked His message to the tradition of believing Israel.
I was with learned friends on Sunday afternoon and we were discussing marriage and family life and the Church's teaching thereof. We were contemplating how history works with these issues insofar as, for example, Humanae Vitae was initially rejected outright by many when it was first promulgated by Pope Paul VI in 1968. Canadian Bishops, for example, issued the Winnipeg Statement, one of the most influential post-Vatican II documents, just eight weeks after Humanae Vitae. It was about conscience relative to birth control and as the first response from the world's episcopal conferences, there's little doubt it influenced the statements from Scandinavia, Austria, West Germany, the Netherlands, and Belgium, all of which openly amended Paul VI's absolute prohibition of contraception.
In today's post Theology of the Body Catholic World, Humanae Vitae is the source of great study once again. It has been called 'prophetic', as we analyse the consequences of realities that have come to pass, which Paul VI warned us of in 1968. The point being that these things do take time. There is always a fuss about particular instances, but it always takes time and patience for us to understand. Pope Benedict is like this, as one friend remarked. Pope Benedict understood the import of his office and he spoke in such a way as to feed the flock in 100 years time. He knows this is how the papacy works.
The consensus among educated Catholics is that Church teaching on marriage and family life is not known by the majority of the laity. My own involvement in collating the answers to the pre-synodal questionnaire confirmed that this was the case, with most respondents bemoaning a lack of provision for the laity to study and understand Church teaching on these issues. Today, as a result of that lack of teaching, two generations of Catholics (along with everyone else) have now been conditioned to see birth control as an instrument of women's liberation, a panacea for marital strife, a fuel injection for sexual ecstasy, and a triumph of human ingenuity over cruel "Nature, red in tooth and claw."
However, in direct contradiction to that is the testimony of any faithful Catholic who has bucked the system to follow Church teaching in this regard. Living what the Church teaches means sacrifice, and submission to Christ in our lives. But it also means embracing the existential reality of our lives as lived. It means embracing that reality and exploring the truth in relationship. It's always a challenge, but an invigorating challenge which presents great rewards in terms of joy and the kind of peace that comes from knowing you have given fully of yourself in the interest of others. And in many ways I think that is a big part of the true secret of happiness.