Pope denounces the "rigid" attached to doctrine as "Pharisees" 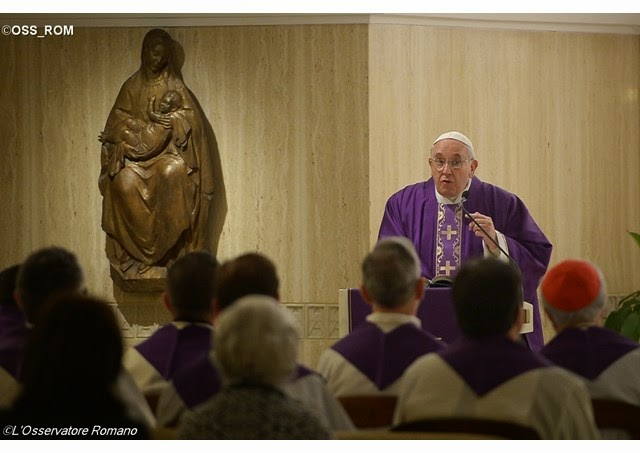 So yesterday Pope denounced the "rigid" attached to doctrine as "Pharisees...weak to the point of rottenness." To Western ears, it sounded as if he was criticising faithful Catholics who stick to Church teaching; he even used the word "doctrine" (dottrina in the original Italian)which means "teaching". But that would be absurd. For the Pope, our Holy Father to criticise faithful Catholics for following Church teaching???!!!! I had to stop, turn myself around and have a careful think about what he said.


"Pope Francis recalled how “Pius XII freed us from the very heavy cross that was the Eucharistic fast”:

“But some of you might remember. You couldn’t even drink a drop of water. Not even that! And to brush your teeth, it had to be done in such a way that you didn’t swallow the water. But I myself as a young boy went to confession for having made the Communion, because I thought a drop of water had gone in. Is it true or no? It’s true. When Pius XII changed the discipline: ‘Ah, heresy! No! He touched the discipline of the Church.’ So many Pharisees were scandalized. So many. Because Pius XII had acted like Jesus: he saw the need of the people. ‘But the poor people, with such warmth.’ These priests who said three Masses, the last at one o’clock, after noon, fasting. The discipline of the Church. And these Pharisees [spoke about] ‘our discipline’ – rigid on the outside, but, as Jesus said of them, ‘rotting in the heart,’ weak, weak to the point of rottenness. Gloomy in the heart.”

“This is the drama of these people,” and Jesus denounces hypocrisy and opportunism:
“Even our life can become like that, even our life. And sometimes, I confess something to you, when I have seen a Christian, a Christian of that kind, with a weak heart, not firm, not fixed on the rock—Jesus – and with such rigidness on the outside, I ask the Lord: ‘But Lord, throw a banana peel in front of them, so that they will take a good fall, and feel shame that they are sinners, and so encounter You, [and realise] that You are the Saviour. Many times a sin will make us feel shame, and make us encounter the Lord, Who pardons us, as the sick who were there and went to the Lord for healing.”

I think you could argue either way on his original point. The fast was harsh, perhaps a bit too harsh. But it served to reinforce the importance of what you were about to do. Also, despite his dislike for it in his youth, he ended up as Pope...So it can't have done him any spiritual harm!

I am a bit concerned about his words here, and my concern centres around why he says such things. I think he is acting from a sense of mercy, to say to people 'look, don't worry too much about this or that little detail. Concentrate instead on being good, on loving each other, on what matters.' From that perspective he is absolutely correct. We should not dwell on minutiae; details should not stand between us and a conversion of heart; our turning towards Christ. Often in the modern world there appear to be barriers for many people approaching Christ and His Church and the Pope is addressing these barriers and attempting to break them down. He is setting his priorities: that people come first to Christ.

This is essential. We fail so often today to explain to people that being a Christian is first and foremost about forming a real relationship with the Person of Jesus Christ. We have fallen into a strange habit of sacramentalising our people, without evangelising them. At Confirmation classes, I try to teach young people in a short while what should have been drip-fed to them over the whole of their lives.

Also the disciplines of faith are not there to present a barrier to following Christ, rather they are pedagogical. They are training: exercises that prepare our minds and bodies for a metaphysical encounter. They serve to raise our minds and spirits to the contemplation of the divine. They enforce upon us the importance of what we are doing.

But when they become the reason in and of themselves; when we exhibit a slavish adherence to praxis which denigrates the fundamental dignity of the human person made in the image of Christ, we fail to recognise the value of such actions. Such actions must always be ways to lead us to encounter Christ.

Jesus taught: “The sabbath was made for man, not man for the sabbath; so the Son of man is lord even of the sabbath.”

Jesus attacked the Pharisees because they attempted to maintain their Holiness through false rules and at the expense of other people's salvation. He didn't criticise them for being faithful. Some misinterpret Jesus' attitude and practice their own inauthentic personal interpretation of Catholicism and work to make it almost impossible for faithful Catholics to practice the authentic Faith. Being a Pharisee isn't about imposing rules. It is all about imposing false rules.

I am reminded by my friend Rauri McCallion that we must remember how the Pope's experience in South American has been different to our experience here in Europe. We know the dangers of abandoning the rules - or rather, of kicking them into touch and saying they don't matter. In Europe and in North America, we never had to face juntas, "disappeared" and the brutal, ruthless crackdowns on ordinary people (Ruari is a former member of Chile Solidarity Campaign and an acquaintance of Sheila Cassidy). Nevertheless our struggles are no less intense for being cultural, rather than physical. There are times when our Holy Father does not seem to fully appreciates this.


I think the concern is (and I don't know that the Holy Father is aware of this necessarily) that some people will feel attacked by his words. These will be people who take the practice of their face seriously, people who will feel that the Pope is criticising that practice. Yet for many devout Catholics, the very expression of their love for Christ and His Church is communicated through these careful actions. To consider that the Pope is criticising this is making the wrong assumption it seems to me.

But the Holy Father should know that it looks like he is criticising Catholics; people who follow the teachings and practice of the Church. It looks like he is advocating a liberalising of teaching like fasting before communion and worse, criticising those who trust and love and follow him. It looks like he is doing this to try and draw people who currently don't care about the Church in. But looking back at the last fifty years or so, it is clear that the strategy of liberalising in order to make the Church more welcoming does not work. In fact it results in alienating those who hold fast to Church teaching, and does not draw those who don't care in. They continue not caring! This is one homily I would really like the Holy Father to explain a bit more!