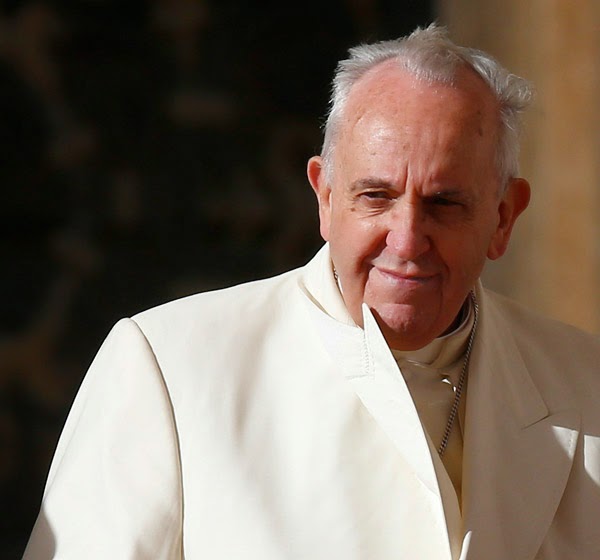 I was really impressed with Pope Francis' insight and courage when, on the way back from his trip to Turkey he urged Muslim leaders to condemn violence done in name of Islam, as Francis X. Rocca reported on Catholic News Service.

The Holy Father made his comments aboard the Papal flight from Istanbul, where he called on political and religious leaders across the Muslim world to condemn violence done in the name of Islam.

Personally, I have always advocated this fundamental stance should be one we are all united in. All our leaders and politicians should be asking with increasing regularity and volume for Muslims to condemn the violence carried out daily in their name. The more this happens, the more their silence will be obvious and unacceptable.


"it would be beautiful if all Islamic leaders -- whether they be political leaders, religious leaders, academic leaders -- would say clearly that they condemn (terrorism), because that will help the majority of Islamic people to say, 'that's true,'" and show non-Muslims that Islam is a religion of peace.

I sincerely agree with him, and I think that this is the essential approach and draws a clear line differentiating the two ideologies. Often what you say is received or rejected based on the way you say it, and with this language the Pope addresses the real problem of Islamic violence in terms that unify Christians and Muslims in an invaluable search for peace.

The Pope went on to develop this theme further yesterday at his weekly general audience where he said Ignoring God, not glorifying him, leads to violence. he explained what went on in a meeting with government leaders:

"we talked about violence and how it is precisely forgetting about God, not his glorification, that generates violence.

"That is why I insisted on the importance of Christians and Muslims working together for solidarity, peace and justice, underlining how every nation must guarantee citizens and religious communities real freedom of worship," he said.

Before the general audience in St. Peter's Square, Pope Francis told the crowd, he met with people taking part in the Third Christian-Muslim Summit, hosted this year by the Pontifical Council for Interreligious Dialogue. Participants, he said, expressed the same desire that Catholics, other Christians and Muslims continue working in "fraternal dialogue."

"Dialogue is the path of peace," he told them, according to a Vatican statement. Prayer, on the other hand, is the foundation and path of Christian unity, the pope said in his audience talk, adding that ecumenism was another major focus of the trip.

Mass in Istanbul's Cathedral of the Holy Spirit brought together Syrian, Armenian and Chaldean Catholics, as well as members of the Latin-rite church. A number of Orthodox dignitaries also attended the Mass, including Orthodox Ecumenical Patriarch Bartholomew of Constantinople, as well as representatives of Istanbul's Protestant communities.

"Together we invoked the Holy Spirit, who is the one who brings unity to the church -- unity in faith, unity in charity" and unity within hearts, he said.

Unity among Christians and unity within the Catholic Church both depend on the Holy Spirit who does everything, he said. "It is up to us to let him work, embrace him and follow his inspiration."

Pope Francis said it was "particularly significant" that after praying together at a liturgy for the feast of St. Andrew, he and Patriarch Bartholomew signed a joint declaration to continue working toward full communion between Catholics and Orthodox.

The feast day was an ideal occasion to "strengthen the fraternal ties between the bishop of Rome, the successor of Peter" and the patriarch, whose church was founded upon the tradition of the apostle Andrew, Peter's brother.