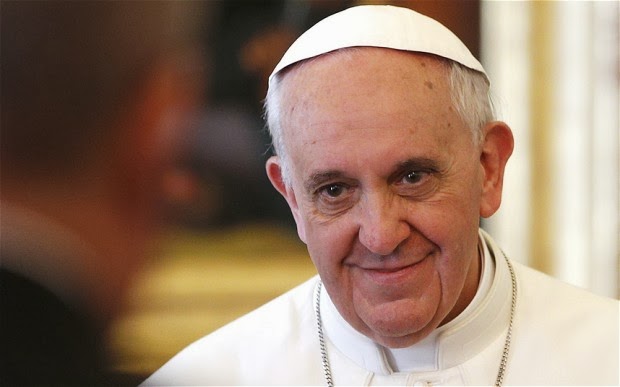 I am starting to really relax into this papacy now. You may be one of those who feels distinctly nervous every time you hear Pope Francis has given a new interview. This may be because every time he does, the press spin his words into a new story about how he is going to change the Church's teaching.

Well, Pope Francis certainly seems intent on changing the Church, but teaching has not changed one jot. Nor will it. Nor can it!

Yesterday, Pope Francis revealed much interesting personal detail in a wide-ranging exclusive interview with Elisabetta Piquè, for La Nacion, the main Argentine newspaper, published yesterday, December 7 and reported in America Magazine's National Catholic Review here. In this interview, he addresses press misconceptions regarding the synod, the vexed question of the divorced and remarried, the reform of the Roman Curia, the resistance to him, the alleged sackings of Cardinal Raymond Burke and the head of the Swiss Guards, and new foreign trips.

He speaks out about the criticism leveled at his papacy as bringing confusion correctly asserting that part of the problem is that people don’t read what he has written: an encyclical together with Benedict XVI, homilies, declarations, and “The Joy of the Gospel.” He recalled that at the end of the synod his concluding speech was enthusiastically received by the bishops, and “that indicated that the problem was not with the Pope.”

When it was put to him that some, especially after the synod, fear that the traditional doctrine of the church will be demolished, Francis said “There are always fears, but because they don’t read the things (the texts), or (they) read news in a daily paper, an article. They do not read what the synod decided, what it published.” He listed three things which he said are “the definitive” result of the synod: “The post-synod (final) report, the post-synod message, and the speech of the Pope.”

Importantly, Pope Francis pointed out that “nobody spoke about homosexual marriage in the synod, it didn’t occur to us. What we spoke about was how a family that has a homosexual son or daughter, how can they educate him/ her, how can they raise her/him, how can this family be helped to move forward in this situation which is a little unprecedented. So in the synod they spoke about the family and homosexual persons in relation to their families, because it is a reality that we encounter many times in the confessional”. So the synod has to see “how to help this father or this mother who accompanies this son or daughter. That’s what was touched upon in the synod. For this reason someone spoke about positive elements in the first rough draft. But that draft was relative.”

He said he is “not afraid” to follow this process of synodality, that is a journeying together, “because it is the journey that God asks of us."

Addressing accusations that he had sacked Cardinal Burke because he was leader of a group that resisted any kind of change at the synod on the family the Pope explained that this was pure nonsense. He explained: “Cardinal Burke asked me one day what he was to do since he had not been confirmed in his post in the juridical sector, and was there under the formula, "until otherwise provided for.” Pope Francis asked the Cardinal “Give me some time because in the G9 they are thinking about a re-structuring of the juridical sectors.” Afterwards he said, “the (position) in the Order of Malta arose, and there was need for a smart American there who can move in that milieu and so I thought of him for that post. I proposed it to him much before the synod and I said, “This will be after the synod because I wish that you participate in the synod as head of the dicastery (Vatican office), because as chaplain of Malta you will not be able (to do so).”

The Pope explained how the cardinal “thanked me much, in good terms and accepted it, so it seemed to me that he liked it. Since he is a man that moves (around) much, that travels, and here he will have work. So it’s certain I did not sack him for how he had behaved in the synod.”

It seems to me that this is a very valuable explanation of what has gone on. We cannot know the reasons for the decisions that are made and speculation without clarification naturally leads to fears and concerns arising. Here we have answers direct from the Holy Father himself.

The fact that we can ask these questions and that the Holy Father will address them is also something healthy, valuable, and refreshing! In writing this blog I have encountered many attitudes that try to silence discussion, that suggest that asking questions is not a good thing. Personally, it seems to me that it is this very culture of secrecy and lack of transparency that leads to huge problems. If there was more clarity about the faith, if it was being taught with clarity, there would be no need for me to write this blog, which is inspired by the questions I get asked and the discussions people pursue with me. It is vital that people have a voice in the Church and blogs provide that voice. Gone are the days when lay people could not even raise a note of concern or voice an opinion about what goes on in their diocese. The Bishop Conry affair is a perfect example of a situation allowed to propagate because questions were not asked. If more lay people knew about the concerns surrounding this man, he may never have been ordained. Despite the criticisms leveled at him, Pope Francis clearly agrees:

All the recent popes have met with resistance at some stage, and now after 20 months, the resistance to Francis that was at first silent and underground has become more evident. Asked how he felt about this, he declared that he considers it “a good sign” that this resistance is ventilated openly, “that they do not speak behind the back when they do not agree. It is healthy to ventilate things, it is very healthy.” He thinks this resistance is linked to decisions he has taken, “decisions that have touched some economic interests, others more pastoral (ones).” But he’s not worried, “it would be abnormal if there were no diverging points of view.” As he moves ahead with the clean-up and reform he feels totally at peace, and remarked, “God is good to me, he has given me a healthy dose of unconsciousness. I keep doing what I must do”.

Prayers for the Holy Father as he moves forward with his mission. And for those of us troubled or who doubt him, peace and faith in what has been given to us by sacred Tradition, and the courage to remember that Ubi Petrus ibi ecclesia, et ibi ecclesia vita eterna.