The Pope on Europe 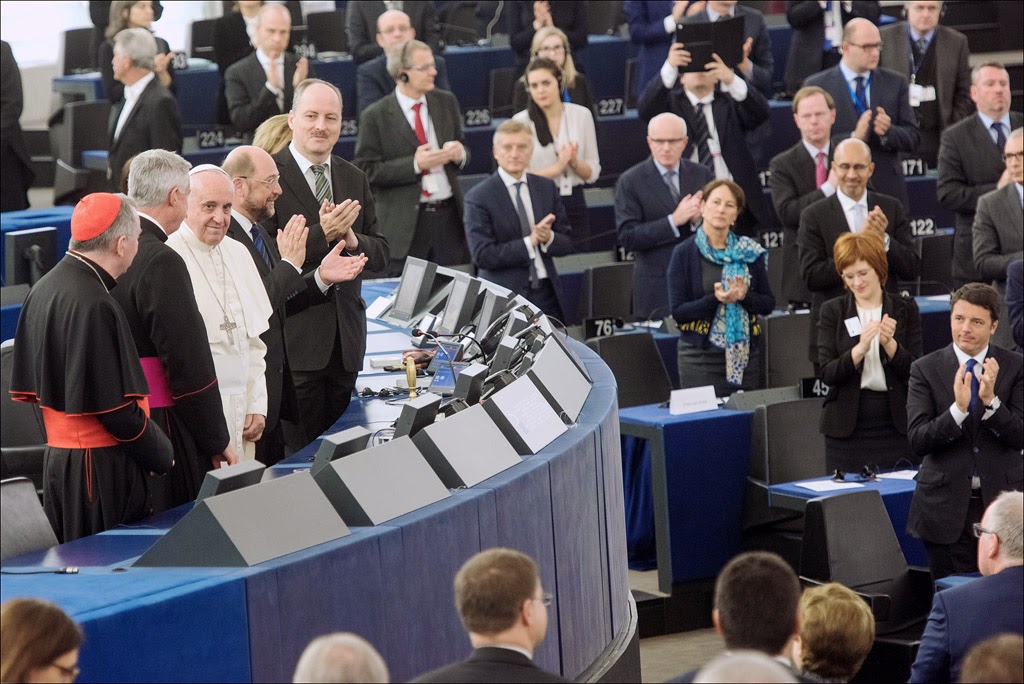 I wanted to post something on the speech Pope Francis delivered to the European Parliament on Tuesday 25th November, but wanted to read and absorb it thoroughly first, thus this post is somewhat late.

My initial observations were amusement at the spectacle of the Pope chastising the body, accusing it of being "aloof", giving his impression of Europe as portraying a "general impression of weariness and aging", "the great ideas which once inspired Europe seem to have lost their attraction, only to be replaced by the bureaucratic technicalities of its institutions." for saying this, he was rather surprisingly, warmly applauded. Interesting I thought. Was it that the politicians had switched off from the content of the speech to such an extent that, by the end, they were on auto-pilot?

The way this has been reported across the world reveals "the Francis effect" in full relief. Francis' comments are the closest he has come to the kind of rhetoric used by Pope Emeritus Benedict XVI, according to Vatican commentator John Allen. For example, Pope Francis asserted “A Europe which is no longer open to the transcendent dimension of life is a Europe which risks slowly losing its soul …” and he emphasised the Christian foundations of European society, stating that Europe needs to stop denying its Christian identity: “A two-thousand-year-old history lines Europe and Christianity …. A Europe which is capable of appreciating its religious roots … will be all the more immune to the many forms of extremism spreading in the world today, not least as a result of the great vacuum of ideals which we are currently witnessing in the West.” The Pope also criticised abortion and euthanasia saying that Abortion is an example of a Western culture that treats human beings as “mere cogs in a machine.” As examples, Francis cited “the terminally ill, the elderly who are abandoned and uncared for, and children who are killed in the womb.”

You have to wonder what the press would have reported had Pope Benedict XVI said such things? As it is, the press ignored the broad bias of Francis' speech toward criticism of Europe and, rather interestingly, concentrated instead on his comments regarding the environment, arms trade, human trafficking, labour and immigration, and the headlines read "Francis demands Europe care for the poor". Allen puts it this way:

Had it been Benedict who journeyed into the heart of secular Europe and said the exact same things, the question likely would have been: “Holy Father, are you on the far right?” The difference has little to do with what Francis actually said, and everything to do with how the narrative dictates he should be perceived.

John Allen is not the only one who detects a more Benedictine element to Francis' rhetoric at the European Parliament. Greg Daly also references this, but goes further:

In calling for the defense of democracy and a renewed emphasis on the dignity of the human person, Pope Francis seems to have been channeling not merely his predecessors but also the so-called Father of Europe, Robert Schuman, a devout Catholic who had been profoundly influenced by the writings of Jacques Maritain and Pope Leo XIII. In Pour l’Europe, his final book before his death in 1963, Schuman wrote that, “Democracy owes its existence to Christianity. It was born the day man was called to realize in his daily commitment the dignity of the human person in his individual freedom, in the respect of the rights of everyone, and in the practice of brotherly love towards all. Never, before Christ, had similar concepts been formulated.”

His speech called Europe to account and almost dared it to be Christian; to recognise that Christianity is its foundational notion and the principle which has made it a success in brokering peace in a diverse social melee. I felt moved by the Pope's address, by his call to Europe's leaders, reminiscent of John the Baptist, breaking down the essential elements of value at the core of Europe's ideology and reminding them of just how Christian these elements are. I was so pleased that those present were able to recognise the truth and value in what he said.