Cardinal Tagle of Manila looks forward to the Papal visit 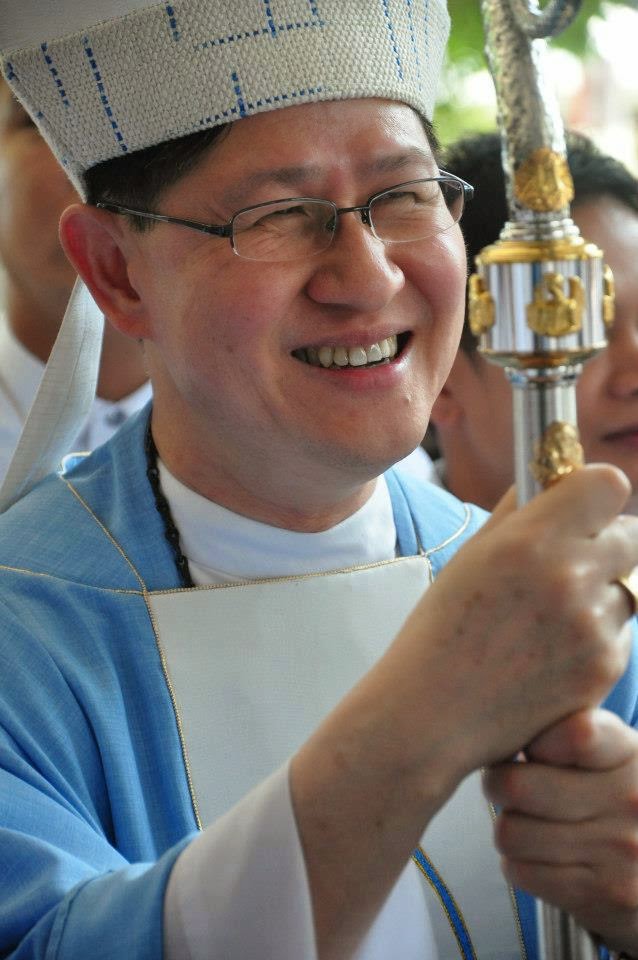 I'm a bit of a fan of Cardinal Tagle, the 32nd Archbishop of Manila, Cardinal-Priest of the titular church of San Felice da Cantalice a Centocelle. He was appointed by Pope Benedict XVI to succeed Archbishop Emeritus Cardinal Gaudencio Rosales on November 24th 2012 and at the time of the last conclave, he was on quite a few lists of papabile.

Cardinal Tagle is the Professor of Dogmatic Synthesis at the Graduate School of Theology of San Carlos Seminary, the archdiocesan major seminary of Manila, and an Associate Professor of Systematic Theology at the Loyola School of Theology of Ateneo de Manila University. He speaks fluent Italian and English in addition to his native Tagalog, and is also proficient in reading Spanish, French and Latin.

The Cardinal has has not shied away from becoming involved in many social issues in the Philippines with emphasis on helping the poor and the needy whilst maintaining opposition against practical atheism, abortion, contraception, and the Reproductive Health Bill. He currently wields strong religious and political influence as the capital's archbishop, with an estimated 2.8 million professed Roman Catholics in his Archdiocese.

In this short video from CNS, he looks forward to the forthcoming visit of the Holy Father:

His focus is how the Holy Father's visit can assist the people recovering from the terrible damage wrought by storms on the islands.

Who can forget the incredibly moving images of the Cardinal being comforted by Pope Francis back in 2013 during prayers for the deceased and the survivors of Typhoon Haiyan. 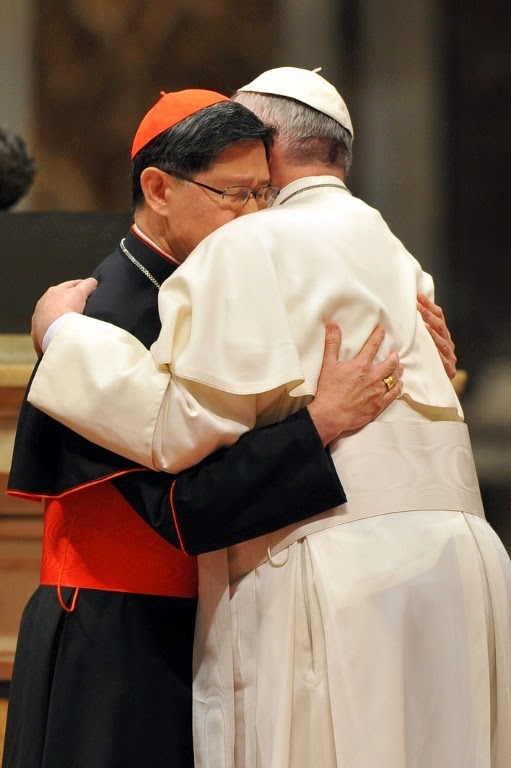 The Cardinal's second concern is evangelisation. Evangelising his own people in order that they might go out and evangelise the world. Last year, the Cardinal remarked that the responses to the questionnaires about church teaching on the family in advance of last Autumn's extraordinary Synod of Bishops on the family were:


"Shocking because almost in all parts of the world, the questionnaires indicated that the teaching of the church regarding family life is not clearly understood by people, and the language by which the church proposes the teaching seems to be a language not accessible to people,"

"So this is my hope, not for change -- how can you change the biblical teachings? But maybe a real pastoral and evangelical concern for the Church: How do we present the good news of the family to this generation, with its limitations, with its greatness, with its unique experiences?"

This is exactly what I was hoping the Synod would concentrate on. We at the grass roots level who have taken the time to understand Church teaching recognise its truth and power, but also that it has not been transmitted in any intelligible fashion, instead error has been allowed to proliferate. If you were really cynical, you might think it was deliberately allowed to proliferate, in order to increase pressure to the extent where it looks as if the only option in the face of a secular agenda is capitulation.

This is particularly interesting when one considers how this was the agenda of Archbishop Warlock as published in the document The Easter People, which resulted from a National Pastoral Congress of 2,000 men and women convoked by the Bishops' Conference of England and Wales in Liverpool in 1980 to discuss the three hot-button issues of women priests, artificial birth control and communion for divorced and remarried. Cardinal Nichols of course, was one of Archbishop Worlock's rising stars in Liverpool at the time.

For the full schedule of the Pope’s visit to the Philippines and Sri Lanka, click here.