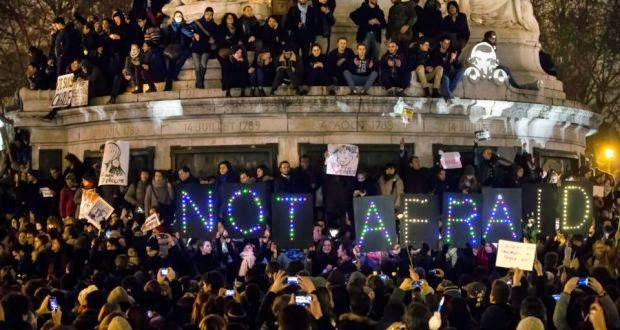 Obviously, I am utterly appalled by the violence in Paris. But I am also appalled by the violence in Syria, in Iraq, in Afghanistan. Yes I am cross about the people who have been killed for poking fun at Islam, the gloating gunmen shouting "We have avenged Mohammed" as they make off, but I am also cross about the "collateral damage" and innocent people killed in Muslim countries. War begets war, violence begets violence and despite the fact that, at the time of the 7/7 bombings in London, Tony Blair stated that the violence we are suffering was not "in response to a particular policy", what we see time and time again is Muslims making the claim that it is:

This is not an isolated opinion. Twitter is rife with such statements this morning:

Muslim friends have tried to tell me before that Muslims like this are not Muslims. Or that Islamic violence is not motivated by religious zeal but by political motives (see here). Is the Charlie Hebdo atrocity motivated by politics or by outrage at their perceived blasphemy? We all know the answer.

Tony Blair was right in the sense that we can not allow the idea that the violence in our cities is a direct result of our countries aggressive actions in other countries to persist for fear it becomes some kind of justification. Notwithstanding, it is a reality. I have long pondered how we justify our Western ideology of no capital punishment and human rights, while waging war, with all its terrible consequences, in so many places throughout the world, and without any seeming concern for possible repercussions. Well this is it coming home to roost, courtesy of a particularly pernicious ideology which divorces faith from reason in such a way as to facilitate the justification of practically any atrocity as the will of Allah.

Of course, it is idiotic to consider that we acted en masse in this way, especially considering the way the people of this country demonstrated in an unprecedented way against the war, and the Muslim population: are they not responsible too?? Non sequitor!!

OK, now...We have this situation where lots of people are finding it incredulous that people were shot for drawing cartoons. The argument as articulated here by Ed West is that satire is that it should make fun of the powerful and so shame them into changing their ways or make the rest of us fear or respect them less. The most widely criticised comment I've seen so far, has come from the Financial Times' Tony Barber: 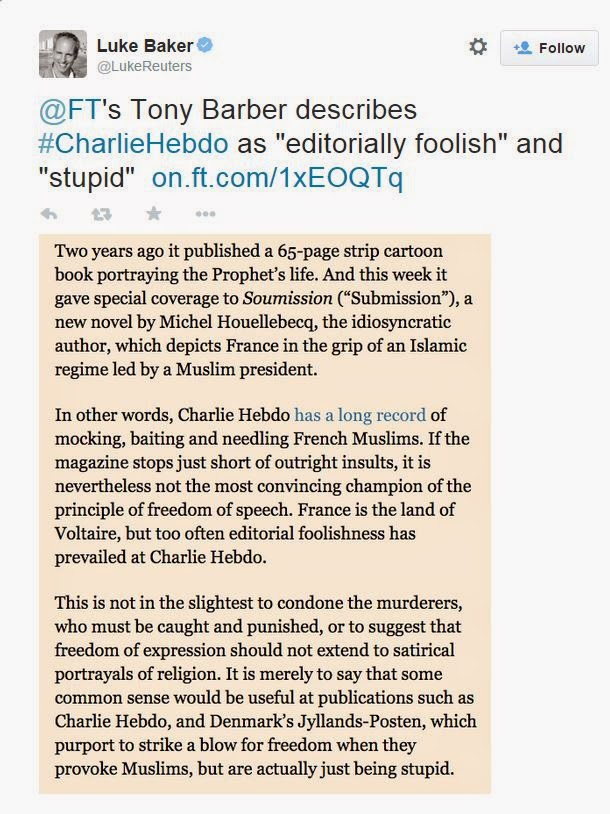 Ed West considers that "this is partly the logic of the Islamophobia industry and the victimhood narrative: that Muslims are so sensitive and defenceless that they can’t help but respond violently to anyone making fun of their religion.

The point that seemed completely lost on the FT is that, while mocking a religious group may be unkind, once members of that group begin to threaten people for doing so then making fun of them becomes a duty. As Douglas Murray pointed out in his booklet Islamophilia, once we can freely make fun of Islam then people should stop doing so, because it would just be unpleasant and rude. Until then, we have a moral duty to do so.

Charlie Hebdo made fun of everyone – including Catholics and Jews – in a way that was crude and offensive. But no one was obliged to buy the newspaper. Lots of Catholics stopped reading the Times after it printed a cartoon with Benedict XVI wearing a condom on his head. That’s what religious people should do with publications that offend – don’t buy them.

In that cartoon the Times was criticising the Church’s response to the Aids crisis in Africa. That’s their call. All newspapers, like any commercial venture, must be careful about offending and losing customers – it’s how the free market encourages politeness and tolerance. But when people start censoring out of fear that is another thing altogether."


OK I get that, but there is something of the playground bully about this sort of behaviour, about Charlie Hebdo's behaviour, and Ed is simply saying that we should ignore the bully because he'll eventually get bored and stop bullying us (or Islam). I don't know about you, but that's the sort of advice that I found useless and infuriating when I was a child, despite the obvious accuracy and logic (if it even does work, given the unrelenting & increasingly vociferous attacks on Christianity). It strikes me as a form of capitulation before the bully, when my own sense of inner justice screams that Charlie Hebdo should not be deliberately insulting people, any people, so crudely and offensively. It is a symptom of our society and our determination to hold on to principles of free speech at any cost that ends up with us somehow compromising what should be the foundational principle of the dignity of every human being: dignity that we should each respect and uphold.

The response to the Islamic violence in Paris I have seen has been typified thus: 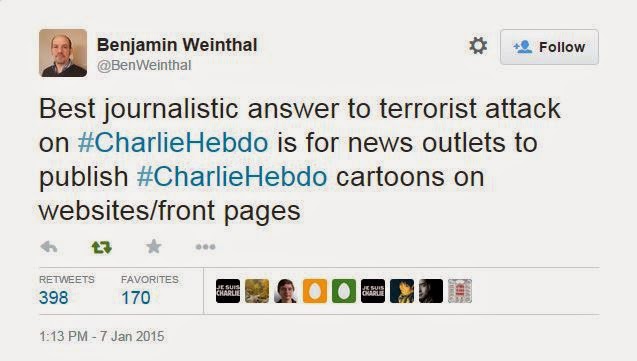 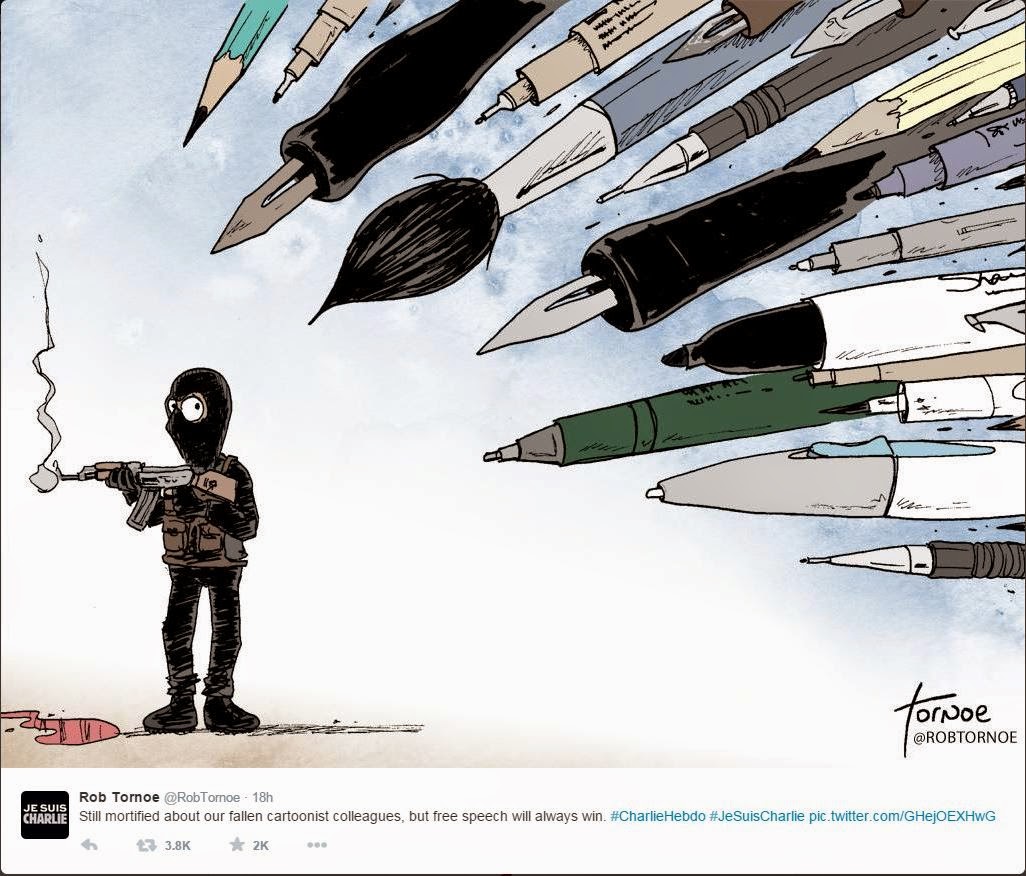 Fundamentally the question is summarised today by the media as not being so much about whether Charlie Hebdo was right to publish offensive cartoons unilaterally, but rather whether all the other news outlets are wrong for not having done so! Is it so unreasonable to recognise that meeting offence with more offence is not really much of a way forward? Just an idea.

That said, I will flip the coin again, because the Muslims are horrible, tragically wrong. As Blair said in 2005, if it is the plight of the Palestinians that drives them, why, every time it looks as if Israel and Palestine are making progress, does the same ideology perpetrate an outrage that turns hope back into despair? If it is Afghanistan that motivates them, why blow up innocent Afghans on their way to their first ever election? If it is Iraq that motivates them, why is the same ideology killing Iraqis by terror in defiance of an elected Iraqi government? What was September 11, 2001 the reprisal for? Why even after the first Madrid bomb (in March 2004) and the election of a new Spanish government, were they planning another atrocity when caught? Why if it is the cause of Muslims that concerns them, do they kill so many with such callous indifference? What can this latest atrocity hope to achieve, except for those on the extreme fringes of the argument to find more and better reasons to justify their hatred and vilification of those they choose to caricature? All that has been achieved is the increased suspicion against all religion, the increased

Let us begin, not by attacking each other, by asking who is to blame, but let us start by asserting together, that the fundamental human dignity of every person, and reasserting the fact that it is always wrong to murder innocent people, whoever is doing it. Then, together, let's try and build peace.