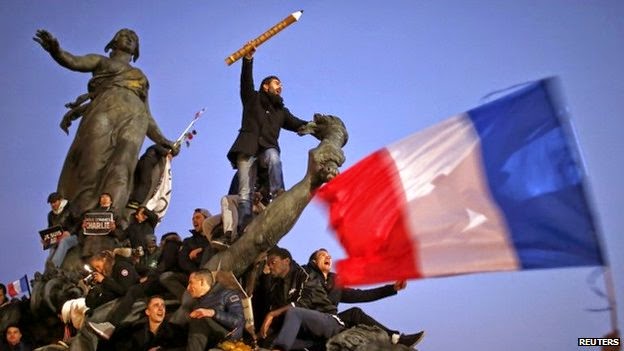 The Charlie Hebdo tragedy unleashed a tide of liberal comment which seemed to suggest that we all have some sort of moral duty to be as rude and insulting as possible to each other in the name of free speech. Lots of people who would not read Charlie Hebdo, or condone its grotesque attempts at humour were asserting "Je suis Charlie!"

Freedom of speech as an absolute right is nonsense; all rights have to be tempered by responsibility.

Surely the more accomplished human being might be recognised by their ability to get their point across, no matter how delicate, without causing undue offence? At what point did we de-evolve into a society that thinks being offensive is a trait we should applaud and defend as something key and vital to our healthy operation?

Also, satire attacks power and comforts those who are subjugated in some way by this power. The Charlie Hebdo cartoons are salacious, rude, sexual, and plain filth as far as I'm concerned.

Following my comments on the 8th, I watched Martin Rowson and Will Self engage in this really rather intelligent discussion on Channel Four News in which they both seemed to express many of feelings I was trying to articulate in my blog. It really is quite refreshing to see three intelligent people discussing this issue rather than engaging in hyperbole that serves no purpose of enlightenment, but only to heighten tensions that need no further exacerbating.