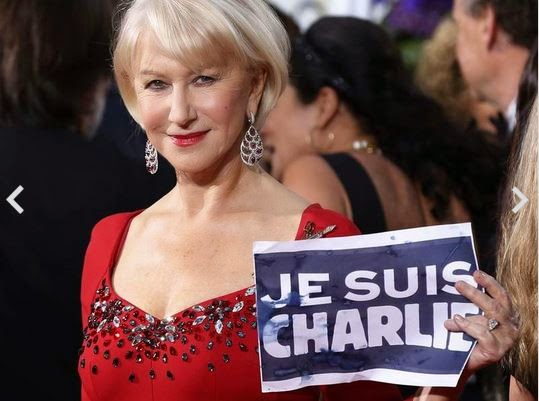 I watched Sky News this morning as I was getting ready to go to work and noted will a sigh and a roll of my eyes how much coverage celebrities at the Golden Globe awards got for sporting slogans which (apparently) demonstrate their solidarity with those killed for penning rude and offensive cartoons in Paris. The BBC is exactly the same of course.

What I didn't hear mention of was the 2,000 people killed in Nigeria recently by Boko Harem in Nigeria. Here is the story in The Guardian. It was left to the Catholic Archbishop of Jos and president of the Nigerian Bishops Conference, Ignatius Kaigama, to speak out about that attrocity.

Archbishop Kaigama highlighted the stark difference between the west's willingness to act when 17 people were killed by militants in France and the approach to the slaughter in Africa.

Estimates of the death toll in Baga and surrounding villages, which were razed by fire, have been put at up to 2,000. Most of the dead were women, children and the elderly who could not flee in time, said Amnesty International, which labelled it the group's deadliest massacre yet.

The stark disparity really does make one wonder at the warped way the world's media disseminates and prioritises information and highlights the inequality at the heart of Islamic aggression. Islamists argue that Muslim lives are cheap, only Western lives matter to the West. Look at this story and you have to ask yourself, are they right? Do they have a point?

The fundamental global problem that causes violence is inequality and prejudice. Until we act internationally with integrity, until we universally apply the standards we so laud, we really do just look like hypocrites.