January 28, 2015
Mgr Robert Mercer is one of those brave former Anglican bishops who put their integrity and faith before their personal well-being, affluence, and influence, and prioritised unity over their position by joining the Catholic Church.

He was educated at Grey School, Port Elizabeth and St Paul’s Theological College, Grahamstown. Ordained as a deacon in 1959 and as a priest a year later, his first post was as a curate at Hillside, Bulawayo. After time at St Teilo’s Carmarthen, he returned to his homeland.

In 1970, he was deported from South Africa because of his stand against apartheid, specifically for running, with other Anglican clerics, a multi-racial parish at Stellenbosch University. He was then chaplain of St Augustine's School, Penhalonga and then rector of Borrowdale, Harare.

On 7 January, 2012, Mercer was received into the Roman Catholic Church as a member of the Personal Ordinariate of Our Lady of Walsingham. On 27 March 2012, he was ordained a Catholic priest by Bishop Alan Hopes in the Cathedral of St John the Evangelist, Portsmouth. On 21 June, 2012 it was announced that he had been elevated to the rank of Chaplain of His Holiness, entitling him to the title of monsignor.

Last week was the week of prayer for Christian Unity and Mgr Mercer gave this superb and honest homily at St. Agatha's, Portsmouth. Given the "ordination" of Libby Lane as "bishop" at York Minster on Monday, which sadly constitutes a burning of the ecumenical bridge between the See of Peter and the Church of England, these words are all the more apposite.

I can't find the full video, but I watched John Sentamu live on Sky News, where he compared Libby to a succession of English Catholic Saints, including, incredibly perversley, St. Margaret Clitherow who, on Good Friday 1586, was crushed to death. She was stripped and had a handkerchief tied across her face then laid out upon a sharp rock the size of a man's fist, the door from her own house was put on top of her and slowly loaded with an immense weight of rocks and stones (the small sharp rock would break her back when the heavy rocks were laid on top of her). Her death occurred within fifteen minutes, but her body was left for six hours before the weight was removed. After her death her hand was removed, and this relic is now housed in the chapel of the Bar Convent, York. 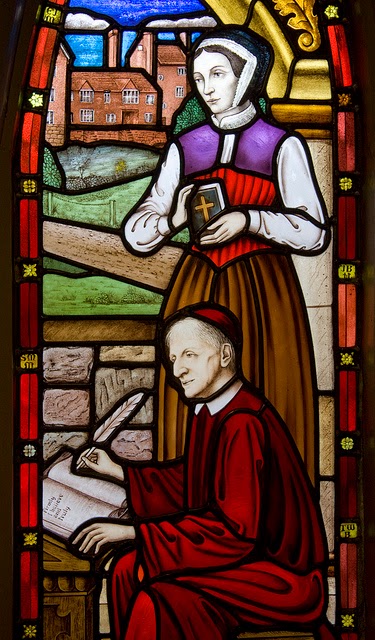 Her crime was harbouring Roman Catholic priests. She was killed for not assenting to the pervesion of Catholic England by Henry VIII. I found it shocking that she would be invoked as a template for Libby Lane, a woman who constitutes a further example of the perversion of the Catholic faith in England. I thought I would be uninterested in the event, but watching the Catholic "style" it was all done in, I found myself growing increasingly sad for the sad pageant of pretend catholicism it represented. All the dressing up, but ultimately heading away from Tradition, heading away from unity, heading away from truth and objective reality, heading away from humility before God, heading away from a relationship with Christ on His terms and re-inventing Christianity in a way that is comfortable and accommodates my terms.

As Fr. Ray puts it today "Nothing of Value Here".

This is some of the text of Mgr Mercer's homily (full text here):

In the Week of Prayer for Christian Unity I lament the CofE and its practice with regard to unity.

In North Africa in the cross over between the fouth century and the fifth century there worked a great bishop, writer, preacher and theologian. He wrote his autobiography. It is now a well known classic available in many editions and translations. Perhaps some of you possess a copy. It’s called the Confessions of St Augustine. He tells how as a young man he used to pray “Lord give me chastity—but not yet.” Augustine neatly sums up the Anglican position about reappoachment, “Lord give us unity—but not yet.”

Anglicans make the right noises, offer the right prayers. In 1920 the Lambeth Conference of Bishops issued an appeal for unity to all Christian people. Between 1921 and 1926 there were five unofficial but serious talks in Belgium between Anglican and Catholic scholars. Every Archbishop of Canterbury since Geoffrey Fisher has visited the Pope, some of them several times. Pope Paul VI described Anglicans as “our sister church.”

Pope John Paul II visited Archbishop Robert Runcie in Canterbury Cathedral, Bells pealed, crowds lined the streets, the Prince of Wales was in attendance. The two men knelt side by side to pray for unity. They wrote a document urging all Anglicans and Catholics to work to this goal. The Pope was received in Buckingham Palace by the Queen. Pope Benedict XVI paid a state visit to the Queen in Edinburgh. Bagpipes celebrated, crowds lined the streets. The Pope went on to visit Archbishop Rowan Williams at Lambeth. The two men knelt side by side before the shrine of St Edward the Confessor in Westminster Abbey. There has even been a cricket match in England between clergy from the Vatican and clergy from the CofE.

The Anglican Communion has a kind of embassy at the Vatican, the only denomination to do so. It’s called the Anglican Centre and its director is a kind of nuncio. There have been the ARCIC talks, Anglican Roman Catholic International Consultations, which have been meeting over several decades in several countries. They have published statements of great agreement, freely available for all to read.

Oh yes, the right noises. Lord give us unity. But simultaneously the whole Anglican Communion has been taking active, formal and official steps to ensure that the Archbishop of Canterbury can not be reconciled to the Bishop of Rome, to ensure that Anglicans and Catholics can never reunite. Simultaneously the Anglican Communion has been ensuring unity—but never never.

But life is like a two sided coin. The reverse of lamentation is jubilation. If today I’m sad for the Anglican Communion, I jubilate for us. Pope Benedict cut through pious self deception. He decided, “There are some Anglicans who really and truly do want unity with us. We must embrace them.”

So here we are, united but not absorbed, a fruit of ecumenical endeavour and prayer. We retain our identity and culture but we are fully and visibly in communion with the first Bishop of Christendom, the univeral Primate of the universal Church.
If I did not begin with a text from the Bible, I certainly end with one. From the Psalms, where it’s a common refrain, “O give thanks unto the Lord for He is gracious: and His mercy endureth for ever.”