Yesterday I was fortunate enough to be invited to the beautiful Ordinariate Church of Our Lady of the Assumption and St. Gregory in Warwick Street by my friend Fr. Jeff Woolnough for a service of Carols for Epiphany.

The Ordinariate has quickly become a watchword for orthodoxy and beautiful liturgy and it was really interesting to see how many people were there that I knew.

The beautiful event was led by Mgr Keith Newton, and featured readings from the works of Bl John Henry Newman, T S Eliot and G K Chesterton, as well as seasonal lessons from the Scriptures which ended with the Gospel; John 2; the wedding feast at Cana. I thought this was brilliant. These weren't random readings picked out because they were nice. The readings were carefully chosen and ordered to lead to this crescendo of epiphany! I really got the sense we were being taught something; that something important was being revealed to us. You see, if we consider the chronological implications of the Cana event, we note that the marriage occurs on the third day after Jesus’ encounter with Nathaniel (1:43-52), but theologically this is the seventh day of Jesus’ opening week of ministry. The evangelist delineates the successive days in 1:29, 35,43 & 2:1 pointing towards this fact. This implies that creation (cf. Genesis 1:1-2,3) is being transformed and renewed through Jesus (2 Cor 5:17; Rev 21:1-5). The double significance is that the third day is also the time of theophany in the Old Testament (cf. Exodus 19:16-18). John points at Cana as a revelation of God, continuing the events of the Old Testament whilst also pointing forward to history’s decisive theophany; Jesus rising from the tomb on the third day:


“…when God’s former encounters with man become His definitive irruption on earth, when the earth is torn open once and for all and drawn into God’s own life.” ~Ratzinger, op. Cit., p. 250.

In fact, throughout John 1-4, Jesus is presented as the new tabernacle and the new Temple, as the one who replaces the waters of Jewish purification and the locus of Jesus worship. Indeed, Raymond Brown goes further and suggests that these institutions are not so much fulfilled as replaced by Jesus (see: Brown, R., An Introduction to New Testament Christology, (Paulist Press, New Jersey, 1994), p. 199). However, I think that it is Joseph Ratzinger (Pope Emeritus Benedict XVI) who seems to capture the full sense of what John is saying in his Gospel. John, after all, acknowledges the significance of past institutions (cf. Jn 4:22; 1:16-17). Ratzinger explains that Jesus brings the inner expectation of the Law to fulfilment (Ratzinger, op. Cit., p. 253), the theme that pervades his book Jesus of Nazareth. Ratzinger explains how the ritual purification is a gesture of hope, mere ritual and is thus ultimately insufficient of making man really pure for God. When Jesus intervenes at Cana, changing the water into wine, he infuses man’s efforts with the gift of God. This wine is in no way ordinary, as we learn from the steward of the feast (2:10). Once again we find rich symbolism. An abundance of wine is a sign of the Messianic age (Is 25:6; Joel 3:18; Amos 9:13).

At Cana, Jesus creates about one hundred and twenty gallons of fine wine, overflowing generosity, and a recurrent theme throughout the Gospel, which finds its climax on the cross, when Christ pours Himself out in abundance for us (Ratzinger, Ibid, p. 252). The transubstantiation of water into wine anticipates the transubstantiation of wine into blood, when Jesus gives Himself to the world in the Eucharistic liturgy (6:53; 1 Cor 10:16). It seems very correct that there is some Eucharistic significance in the Cana miracle. I think this is the link which ties together all the theological threads. As if to emphasise this very point, the Service concluded with Benediction of the Blessed Sacrament and prayers of thanksgiving for the establishment of the Personal Ordinariate, which was founded four years ago next week.

There was an impressive array of Guest readers, including the former Cabinet minister and Conservative peer, Lord Deben (John Gummer), writer and broadcaster, Mary O'Regan, who I met in person for the first time, having known her digitally for a few years now, and the Mother Superior of the Sisters of the Blessed Virgin Mary, Mother Winsome.

In a change to the published schedule, the parish priest of Warwick Street and church musician, Fr Mark Elliott Smith, read one of the Scriptural lessons, while Fr David Irwin, Episcopal Vicar for Ethnic Chaplaincies for the Diocese of Westminster, kindly agreed to read another. The newly appointed Rector for the National Shrine of Our Lady of Walsingham, Mgr John Armitage, who was scheduled to read one of the readings, was delayed by unforeseen circumstances. He was able to attend most of the Service however and I was privileged to spend some time catching up with him at the reception afterwards. Mgr John really is a charismatic and genuine man with unparalleled drive. Chatting about Walsingham, it is clear he is all over his remit and I am really excited about the direction he is going to take this important shrine in. It was interested juxtaposing a Catholic perspective with what I have seen and learnt about devotion to the shrine from The Ordinariate. More on that tomorrow!

Mgr Newton gave a short but really stunningly good address. He thanked especially the Friends of the Ordinariate and all diocesan Catholics who continue to generously support the work and mission of the Personal Ordinariate of Our Lady of Walsingham. He also thanked the Schola Cantorum of the Cardinal Vaughan Memorial School, mentioning especially the choir's Director, Scott Price, and Organist, Iestyn Evans, for providing the evening's "outstanding" music.

Reflecting on the fact that "next week marks four years since the establishing of the Ordinariate", Mgr Newton spoke of the need that still exists to make this important ecumenical structure "more widely known". Touching on the fact that some still ask why members of the Ordinariate don't "just become 'real Catholics'", he said that the message needs to be made known that the Ordinariate is a "prophetic" and truly "ecumenical" structure which helps make manifest in the West the real "diversity" of the Catholic Church. Mgr Newton explained that real ecumenism means sharing the one true faith, not simply being nice to each other whilst agreeing to disagree on a broad range of issues. I recognised what he was saying as the most accurate exposition of true ecumenism I have ever heard from a pulpit! If you want to understand the issue properly, have a look at this.

Of course, there was fantastic music including 'The Lamb' by John Tavener, 'The Three Kings' by Peter Cornelius and Morten Lauridsen's setting of 'O Magnum Mysterium', as well as hymns and carols, such as 'As With Gladness Men Of Old' and 'O Come All Ye Faithful'.

After the reception, a few of us found ourselves in The Glassblower and shared some excellent fellowship. The good Mgr even joined us for a couple himself! This was my introduction to the Marylebone Ordinariate group, who are a great bunch I look forward to getting to know better. Here we all are enjoying a pint: 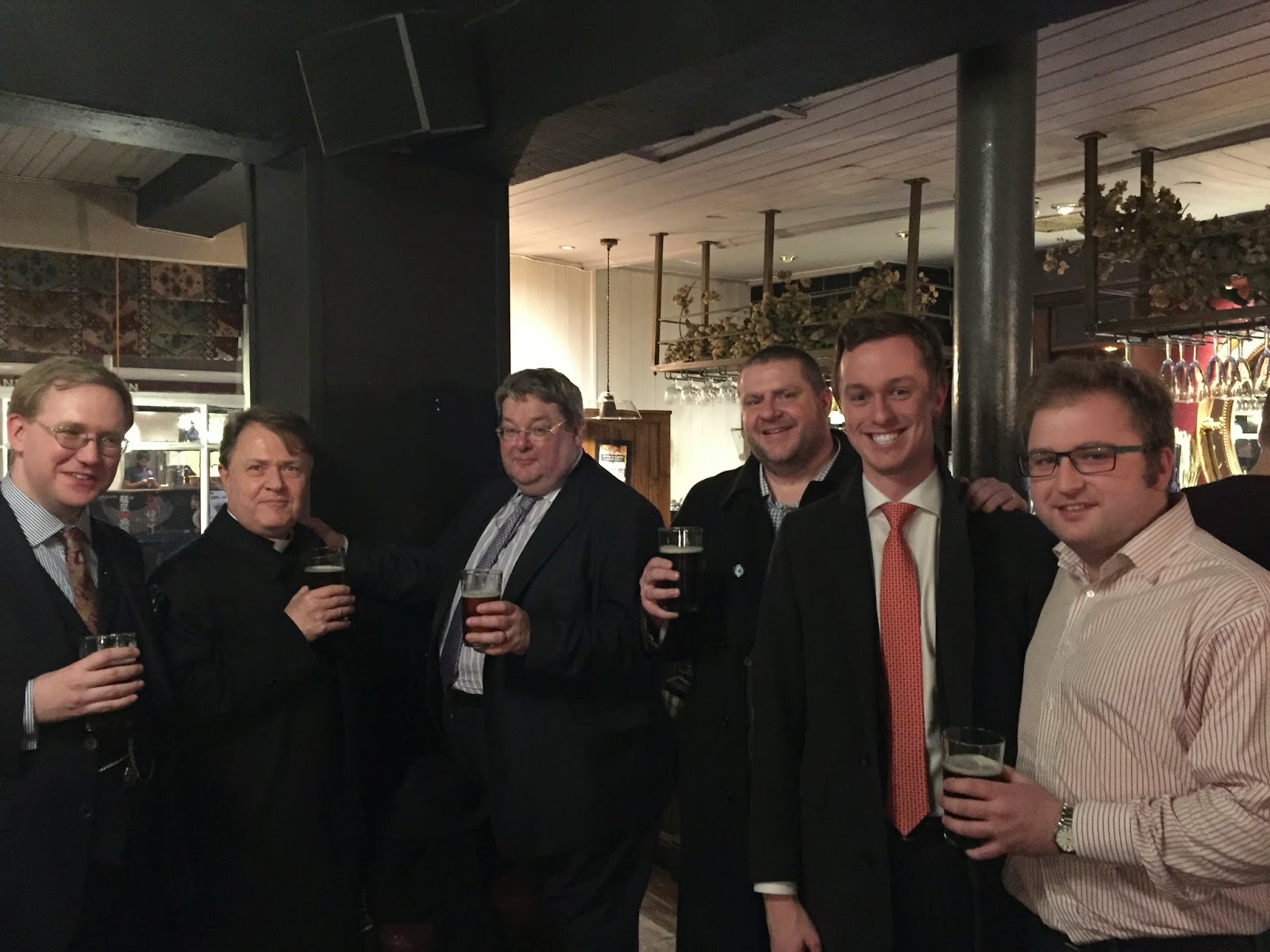 So a big shout out to Harry, Richard, Robert, and James!

All in all The Ordinariate continues to blaze a trail in terms of orthodox, genuine, Catholic praxis. I am so over-joyed that they have had the courage of their convictions and joined their wonderful strength, passion and valuable individual patrimony to our universal whole.

Lots more great pictures on the Friends of the Ordinariate FB page here.