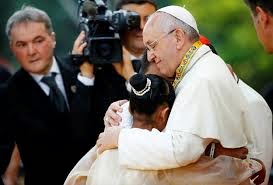 Well, Pope Francis is a lot of things, boring isn't one of them! This trip to Asia has been amazing and often very moving!

I found this moment particularly touched me over the weekend when a 12-year-old girl asked Pope Francis a tearful question about why God allows suffering:

This young lady, Palomar, spoke after Jun Chura — a 14-year-old rescued from the streets by the same foundation — described life on the streets as a struggle to find enough to eat, to fight the temptation of drug use and glue sniffing, and to avoid adults looking for the young to exploit and abuse. Covering her face with her hand as she wept in front of the microphone, Palomar asked the Pope:

“Why did God let this happen to us?”

The Holy Father cast aside his prepared text and said:

“Certain realities in life can only be seen through eyes cleansed by tears,”

I am so struck by the simple profundity of that comment and I am tearing up just writing this! In an incredibly compassionate moment, the Pope kissed the top of Palomar’s head and pulled her close for a big hug, then embraced her and her companion Chura together.

He has such a genuine empathy and compassion, such a moment must surely change these children's lives forever? A moment they will never forget!

I think my other stand out moment was this one where the Pope reads out the Gospel and repeating Jesus' words to Peter in John 21:17, asks "Do you love me?" The congregation immediately responds "Yes!!!"

"Thank you very much" says Pope Francis with a huge smile! The genuine affability and affection is contagious and wonderful!


Tim Stanley notes today that our Pope has a tremendous capacity to be a truly global force for good in our time:


Francis is especially suited to the challenge of reaching out to the developing world. He is the first non-European Pope in nearly 1,300 years, coming from a country – Argentina – whose history touches upon relevant themes of colonialism and struggle for democracy.

His emphasis is happily upon straightforward themes of love and compassion that resonate widely. In the Philippines, former street children asked him why God allowed suffering. When one girl broke down in tears, the Pope told her that crying cleansed the soul and asked why so few other women had been invited to speak. This is a cleric who is prepared to talk frankly and humanely about issues of injustice.

His simplicity appeals, too – although it can have a whiff of stage management. Often, the Pope is seen boarding a plane carrying his own bag. Why does he need a bag on a short flight? What’s in it? Paperwork? A toothbrush? One suspects that this is ostentatious modesty. But when talking to the press mid-flight, he displays a rugged kind of faith that, again, citizens of the developing world would appreciate more than “cosmopolitan” Europeans. His Holiness decried the killings in Paris but noted that when people love God like a father you take a risk when you insult Him.

I personally thought the incredible over-analysis of the Pope's comments about freedom of speech was ridiculous. He is a straight-forward man and spoke honestly and in a straight forward manner. What he said made perfect sense; if nothing is sacred in our society we risk violence. In such a circumstance, there can be no friendship; only frustration and anger. Imagine if we mocked freedom of speech and did not take it seriously? The reality is that sometimes in life we have to take things seriously, otherwise life is absurd. Sure we have a right and even a duty to critique corrupt systems, but ultimately society is built on respect for each other.

Pope St. John Paul II sorted out the philosophy, Pope Benedict XVI did the theology, now Pope Francis is taking it to the people, and he is doing it in such a powerful way, how can the world not be changed by his message, and how can they not question again their rejection of the message of the Gospel? 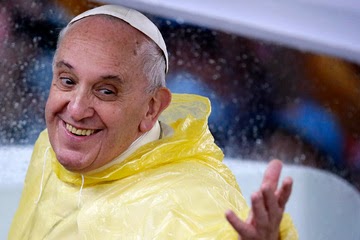 After his affirmation of Catholic social teaching at a meeting with families in Manila’s Mall of Asia Arena, some more schismatic elements have completely lost the plot, demonstrating the extraordinary hubris of some who are utterly convinced that they know better than the Church founded by Jesus Christ, not to mention casual racism, which is neatly summed up by these tweets: 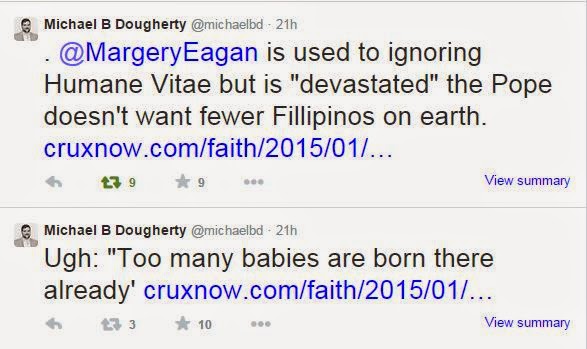 As Mark Shea points out:

This is what happens when you believe your own banana oil about a pope upon whom you have chosen to project your fantasies–and he then fails to comply with your delusions. Anybody with both eyes open could have predicted both that the pope would be (duh) Catholic and that the backlash would happen. But the power of humans to delude themselves with ideology is amazing. So lots of people on the left are shocked, just as lots of Francis’ enemies on the right are relieved. And all those who are shocked and relieved only make clear that they don’t really believe the pope is Catholic. It’s a silly way to go through life, but lots of people choose to do it anyway.

This is the sort of attitude we all recognise and encounter regularly. Remember when Pope Francis said that half-hearted Catholics aren't really Catholics at all? This is the sort of attitude that he means, an attitude convinced of one's own moral rectitude despite polar opposition to Church teaching. Fr. Dwight Longnecker provides excellent insight into this in a recent blog he entitles Dialogue with the Devil.

There he recalls being invited to discuss pastoral care of remarried divorced people in the Church by an individual who it ultimately turned out was living in an adulterous relationship and wanted the Church to change the rules for him. Fr. Dwight was cajoled into this dialogue through overtures which were rational, polite, sensible, compassionate and most of all spiritually sensitive and “listening to where the Spirit is leading the Church.” However, he soon discovered that beneath all the sweetness and light was hard hearted rebellion and the subtext was one of bitterness, hatred and rebellion. Dialogue in this vein gets us nowhere. Our individual journey of faith must be one of discipleship, humbly listening a the feet of Christ and trying to understand our lives in the light of his teaching. This is often difficult, but ultimately so, so valuable!