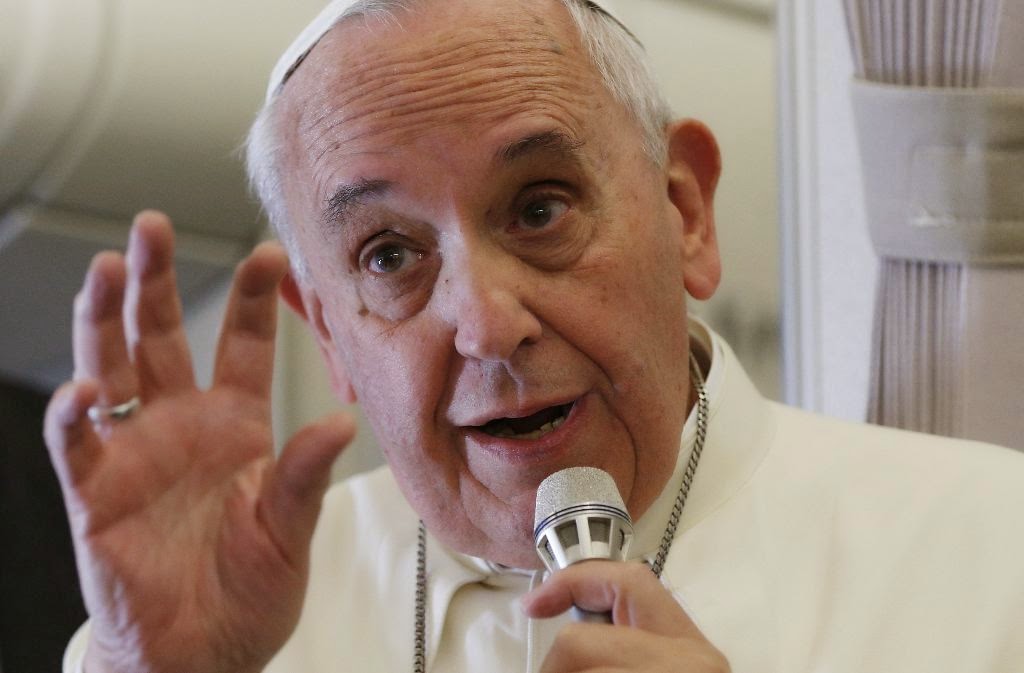 And this, my friends, is why no faithful, intelligent Catholic should ever buy or even read The Tablet.

I mean, how on earth did Christopher Lamb get to this ridiculous leap of logic from Pope Francis' words, words which reaffirmed his rejection of population control programmes as an example of “ideological colonisation” and praised Blessed Paul VI for defending Catholic teaching against contraception?!!

The Pope is asked a question on a plane, the question is this:


Christoph Schmidt: Holy Father, first of all I would like to say: Thank you very much for all the impressive moments of this week. It is the first time I accompany you, and I would like to say thank you very much. My question: you have talked about the many children in the Philippines, about your joy because there are so many children, but according to some polls the majority of Filipinos think that the huge growth of Filipino population is one of the most important reasons for the enormous poverty in the country. A Filipino woman gives birth to an average of three children in her life, and the Catholic position concerning contraception seem to be one of the few question on which a big number of people in the Philippines do not agree with the Church. What do you think about that?


Pope Francis: I think the number of three children per family that you mentioned – it makes me suffer- I think it is the number experts say is important to keep the population going. Three per couple. When this decreases, the other extreme happens, like what is happening in Italy. I have heard, I do not know if it is true, that in 2024 there will be no money to pay pensioners because of the fall in population. Therefore, the key word, to give you an answer, and the one the Church uses all the time, and I do too, is responsible parenthood. How do we do this? With dialogue. Each person with his pastor seeks how to do carry out a responsible parenthood.

That example I mentioned shortly before about that woman who was expecting her eighth child and already had seven who were born with caesareans. That is a an irresponsibility That woman might say 'no, I trust in God.’ But, look, God gives you means to be responsible. Some think that -- excuse the language -- that in order to be good Catholics, we have to be like rabbits. No. Responsible parenthood. This is clear and that is why in the Church there are marriage groups, there are experts in this matter, there are pastors, one can search; and I know so many ways that are licit and that have helped this. You did well to ask me this.

Another curious thing in relation to this is that for the most poor people, a child is a treasure. It is true that you have to be prudent here too, but for them a child is a treasure. Some would say 'God knows how to help me' and perhaps some of them are not prudent, this is true. Responsible paternity, but let us also look at the generosity of that father and mother who see a treasure in every child.

The full text of the Pope's in-flight interview is avaliable here and it is well worth reading, because he speaks about many important issues, and you get a real sense of how moved and effected by the trip the journalists have been!

For a more intelligent exposition of the Pope's message, Austen Ivereigh's blog, here, puts the Pope's comments in their proper context, revealing a far more interesting dimension to what he was saying:


But while Francis was here restating church teaching, the main emphasis of his remarks on this question — ignored in many reports — was to stress the importance of poor people resisting pressures placed on the developing world to have fewer children, often as a condition of receiving aid (an issue memorably raised by one of the African cardinals at October’s synod); or, just as insidiously, to impose gender ideology as a condition of building schools.

It is in this context that Pope Francis re-articulates Paul VI’s opposition to contraception — as a bravely prophetic stance on behalf of the poor of the world against the powers of the age, driven by neo-Malthusian and eugenic assumptions that the “problem” of development is that there are too many poor people in the world.

This language will surprise those in Europe and America who have long seen the contraception question through the lens of personal autonomy. For liberal Catholics, it has also been an iconic issue of an abuse of papal authority (which is how many saw the decision of Paul VI choosing to ignore the findings of the commission the Pope set up to look at the question), and the editorial stances of some publications have been shaped by this lens.

So what is it with Lamb, wishful thinking? Did he just read Damian's headline and not bother with what Pope Francis actually said? Or, I would suggest a more sinister motive, is he trying to deliberately mislead some Catholics who buy & read the paper as they consider it a Catholic intellectual choice? (it's not- it's a heretical rag). One has to look no further than the comments underneath the article, which shine more light on what the Pope actually said than Lamb's dreadful propaganda.


Interestingly, the Pope does not specify which methods should be used, although it is assumed he is talking about natural family planning.

Errrr, that or abstinence Christopher, because that is all the Church permits!

As for the last paragraph, it just reads like it is totally made up! Goodness sake!!

This morning, the Holy Father is praising big families, as Luke Coppen, Editor of a proper Catholic journal, tweeted earlier: 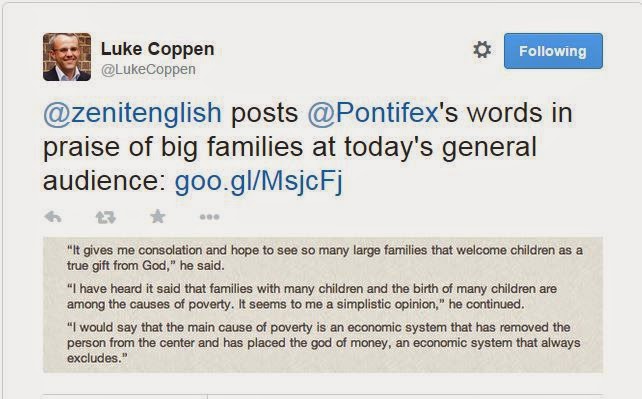