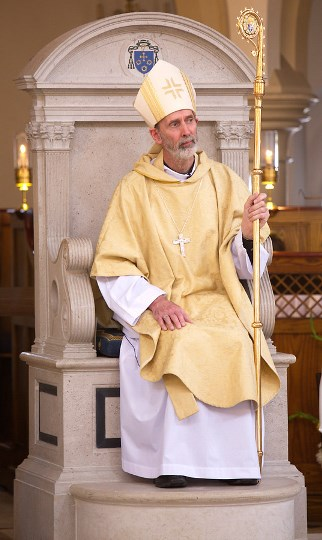 This is the Pastoral Letter from Brentwood's Bishop Alan Williams which was read out on Sunday:

We have now begun the great journey of Lent. All of us, whether as catechumens preparing to enter the Church, or as experienced Catholic Christians, are called to go forward towards the Passion and Resurrection of Jesus. Lent is a grace-filled time, a sacred time; a time for conversion and a time for change.

In today’s Gospel on this first Sunday of Lent we hear that Jesus went into the wilderness for forty days where he struggled with temptation and the extremes of the desert.

This example of Jesus had a profound effect on the early Church when many Christians followed Jesus into the desert and it was in the desert that the first flowerings of Christian monasticism were found. These brothers and sisters consecrated themselves to God and embraced the struggle alongside Christ.

In the desert, “human life is precarious, indeed almost impossible… the only living things are thorns and thistles, poisonous serpents and stinging insects”.

The first Desert Fathers and Mothers left many accounts of their experiences of successive nights and days in the wilderness; they discovered that following Jesus can mean faithfulness but also failure. They learnt about sanctity and about sin; about the intimate presence of God but also about times of desolation.

Their rule of life in these early monasteries was based on the commandments of Jesus regarding love of God and neighbour. One story tells of a visitor who had sought out a hermit and on leaving said to him, “Forgive me father for having taken you away from your rule”. The hermit answered, “My rule is to refresh you and send you away in peace.”

The Gospel we heard on Ash Wednesday suggests a threefold rule for each of us during Lent: self-control, love of God and love of neighbour. We may choose to give something up, or perhaps to exercise charitable giving; Lent is also a privileged time for prayer. However we decide to celebrate Lent we need to go forward with Jesus, from struggling and death into life.

We can also be encouraged if we remember that Lent is a wonderful time to be reconciled with the Lord and with each other.

Like those early Christians we need to be clear that our only way forward is the way of Christ. Pope Saint Leo the Great wrote in the fifth century about the temptations of Christ: “He fought then that we might fight after Him; He conquered then, that we also might conquer.”

Pray for me, as I will always pray for you,

In Christ and Mary,