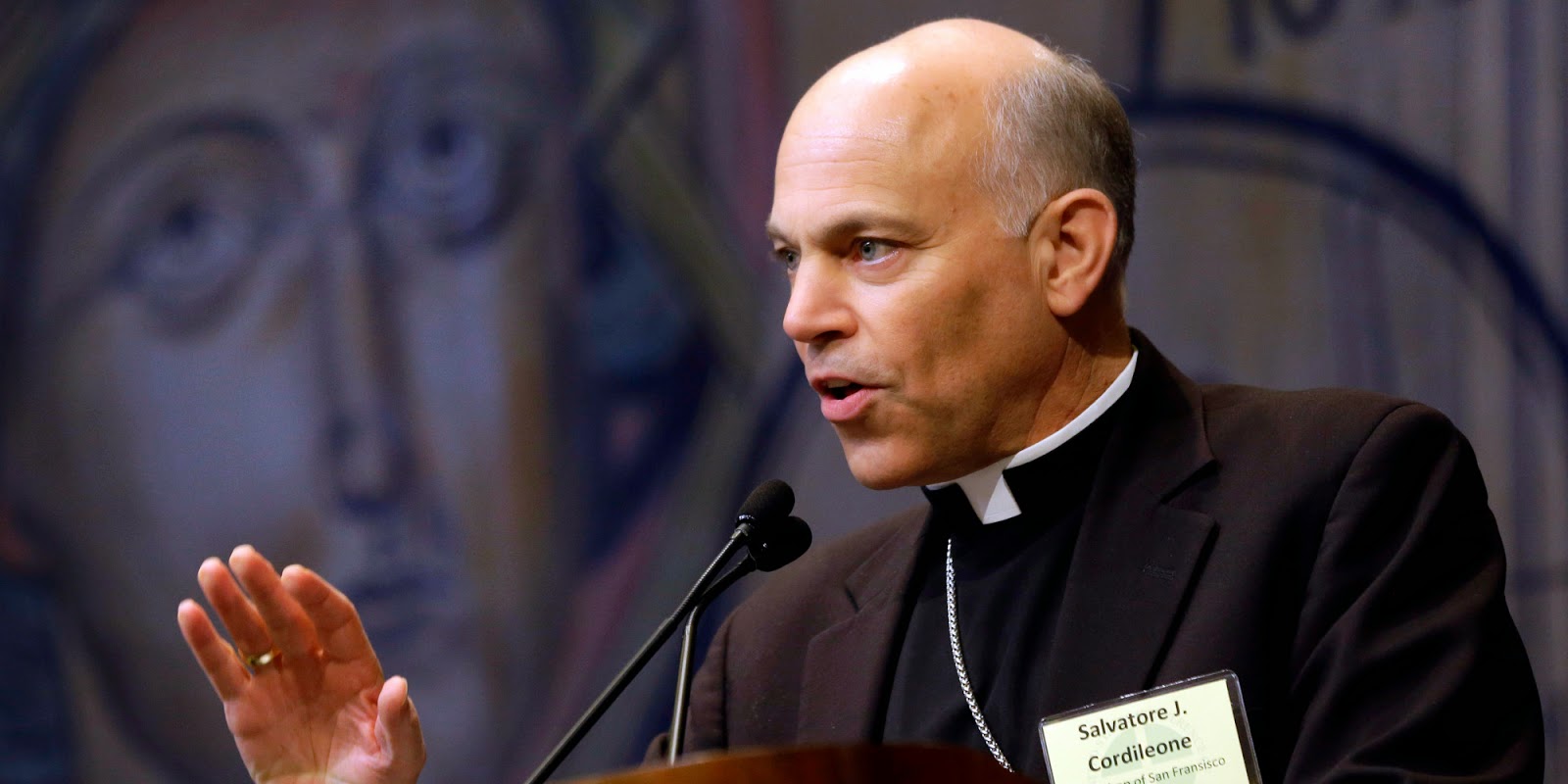 Being a Bishop means leading from the front, it means being a visible sign, both of Christ and of Catholic unity. Leading people has always meant living up to the principles and ideals you want to inspire in others. Here is a man who is doing that. Here is a man who is not afraid to pick up his Cross and follow Christ. Here is a man who knows that he must face vitriol and attack in order that Christ might live in the Archdiocese he is responsible for.

Salvatore Joseph Cordileone (born June 5, 1956) is an American prelate of the Roman Catholic Church and the archbishop of San Francisco, California.

He is notable for being unflinchingly, unequivocally, courageously Catholic. He is utterly fearless. He lives up to his Italian surname Cor di leone, which means "heart of lion" and is renowned for outspoken opposition to same-sex civil marriage and LGBT life-styles. He is chairman of the United States Conference of Catholic Bishops' Subcommittee for the Defense of Marriage, and somewhat unsuprisingly you might say, demonstrates unusual willingness to use the extraordinary form of the Roman Rite of Mass.

Archbishop Cordileone is currently involved in instigating a ground breaking initiative for the schools and colleges in his care. He has proposed strict guidelines for teachers requiring them to (shock-horror!) be Catholic! He wants them to adhere to Catholic principles and to reject homosexuality, use of contraception and other evil behavior.

He is also planning to designate high school teachers as “ministers,” which, under a 2012 U.S. Supreme Court ruling, would have removed government-mandated employee protections by placing them solely under church control.

Surely it is extraordinary that in a Church on earth, wracked by sin, politicking and selfishness, we somehow still get prelates coming through this Catholic?

So wonderful! So brave! What will this do for the Church in San Francisco? It will ensure that young Catholic receive a genuine Catholic education grounded in the principals and philosophy of their faith. It will reduce the ability of Satan to influence and damage families in this part of the world. It will mean that there is more chance for a culture of life to grow up out of this Archdiocese.

What Archbishop Cordileone is doing is what ALL our bishops should be doing. Just imagine what would happen if more of our leaders stood up for Christ and His Church like this? If more of our leaders demonstrated like this that they are not merely paying lip-service to Christ, but that they really believe what our faith teaches?

Obviously there have been huge repercussions, however despite an enormous assault by apostate Catholics, Archbishop Cordileone has not backed off efforts to ensure that Catholic schools in the Archdiocese of San Francisco teach the Catholic faith and despite reports earlier this week that he was in fact seeking to draw back on some of his efforts, the Archbishop has not repealed anything. Rather, with the compassionate heart of a man who knows that the medicine is worth taking, he is adding explanations, clarifications, and material on Catholic social teaching, via a committee of religion teachers he is establishing.

Please, please stop and say a prayer for this man now and thank God for all that he is doing for the faith and the people in his care.