March 12, 2015
Lifesite News carries the story that Cardinal Cordes has rebuked the head of German bishops: We can’t ignore Christ’s teaching on marriage (Lifesite's report in red with my emphasis [and comments]):

After the Bishops of Germany had had their conference in Hildesheim, Northern Germany, Cardinal Marx said words that provoked the resistance of Cardinal Cordes. The latter cardinal has responded out of concern that Marx caused confusion among the faithful.

First of all, Cardinal Cordes rebuked Cardinal Marx for his claim that the Catholic Church looks to and expects much from the Church in Germany. He noted that Germany has barely any supernatural Faith left (only 16.2 percent of German Catholics believe in a Triune God, as a personal God with a Face, instead of an abstraction), so therefore, Germany is hardly a model for any other country concerning the Faith. “We have therefore no reason to put us with our Faith up front of the Churches of other countries,” he said.

[Absolutely, this claim of autonomy is unbelievable from a bishop and nonsense, not to mention open schism; the simplest working definition of a Catholic is a Christian who is in communion with the bishop of Rome]

Cardinal Cordes insists that such questions belong to the responsibility of Rome and not to the German bishops. The matter of marriage lies at the center of theology, and therefore, “a Cardinal cannot easily separate the pastoral approach from the teaching,” he said. “Unless he wants to ignore the binding meaning of Christ's words and the binding words of the Council of Trent.”

[THANK YOU! At last, a Cardinal who knows the Magisterium does not just extend back to Evangelii Gaudium!]

Cardinal Cordes sees a danger in the spirit of independence that came from Cardinal Marx, who insisted that Germany cannot “wait for a Synod in Rome to tell us how we deal with matters of marriage and the family.” He warns that such an “anti-Roman affect” is a destructive force in northern spheres of Europe, destructive for the unity of Faith.

[Shockingly so, it is the spirit of Luther at work once more!]

Cardinal Cordes also rebukes Bishop Bode who supports Marx's claims with the argument that men have to enrich the Faith of the Church, namely that the Church has to incorporate the lives of the people today and adopt the doctrine accordingly – a Paradigm shift in the words of the bishop.

According to Cordes, however, “The Faith of the Catholic Church can only flow out of Holy Scripture and of the Magisterium of the Church.” “Independent of this clear instruction, it would be paradox, if one wanted to give a little group of members of the Church who lives in a pitiable, but objectively irregular situation, the function of a source of Faith.”

Cardinal Cordes closes with his wish that the coming Synod may give these members of the Church clear instruction of how they can draw closer to Jesus Christ so “that they may become witnesses of God's power in the lives of men.” “Perhaps it happens to dawn upon the Synod Fathers, too, that they honor those couples who keep their once spoken promise and did not enter a new relationship. They also exist.”

Surely this is more evidence to support the confusion of many as expressed by Liberal Feminist Camille Paglia here. Existentially, even the liberal feminists are confused by Pope Francis’ game of liberal cat-and-mouse and can see that the break with doctrine being toyed with here is tantamount to a capitulation from the Church, in other words, it will cease to be Catholic.

If Pope Francis isn’t mooting a change in doctrine, he is surely playing the worst game in history, as his credibility with those who would support him—loyal Catholics—is continually being eroded as they are the very people he appears to attack and marginalise by allowing ++Kasper, ++Baldesseri, et al, to run the show up to now. Meanwhile, in Germany, ++Marx is saying the German Church won’t listen to Rome either way. Will the Papacy end up ignored by those who desperately want to follow Christ for lack of authentic teaching, and by those it has tried to woo by capitulating to moral relativism? That’s the thing about Liberalism, once you start to capitulate to its’ principles, you are only ever criticised for not doing so enough! 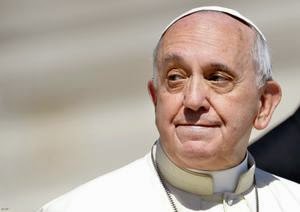