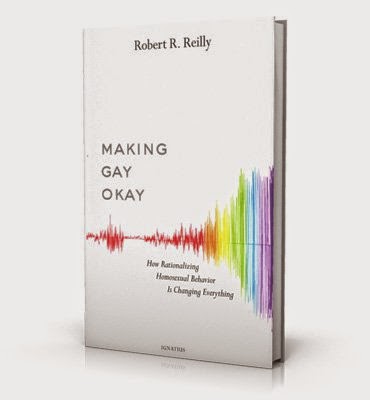 Countercultural Father has just finished reading Making Gay OK by Robert R. Reilly and published by Ignatius. The subtitle is How Rationalizing Homosexual Behaviour is Changing Everything.

This topic is practically beyond the realms of even the possibility of discussion for most people today, so successful has the project been. You are irrational, a homophobe, and a bigot if you even question the moral equivalence of the homosexual agenda. This makes this brave work all the more important in my opinion.

Rather than homophobic or bigoted, could the possibility be entertained that there is an alternative to a full endorsement of homosexuality which equally seeks the very best for homosexual people? This book uses a wealth of statistics and quotations from gay sources which present a detailed account of the damaging depravity of those in the grip of the gay lifestyle at its worst.


That is the other reason we must oppose this: it is doing those with homosexual tendencies terrible harm - and the gay lobby clearly wants to recruit more and more people, at younger and younger ages (when they are most likely to be confused about their sexuality), to the 'lifestyle' and convince them (against the evidence) that it is immutable.

This is a very well researched and important book on an important topic.  As CC Father states:
"For anyone who thinks that legalising Gay Marriage is unimportant, it should serve as a wake-up call. SSM is not a neutral concept, still less is it about any meaningful equality. Rather it is a direct assault on traditional morality and the family, and therefore on society itself."

Please do head over there and read his review: