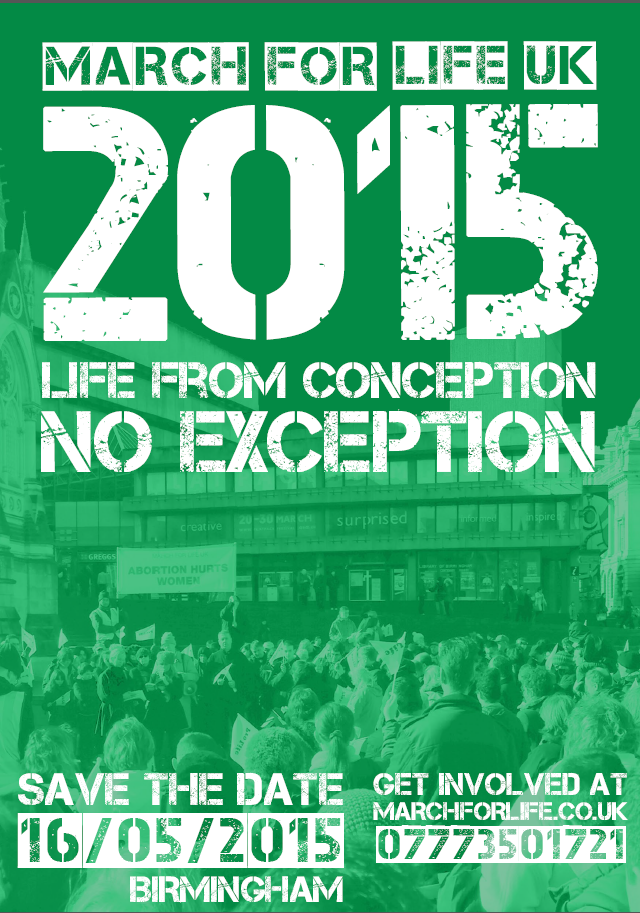 March for Life is huge in America with hundreds of thousands of people turning up to walk for the rights of unborn children killed in their mothers wombs. March for Life began as a small demonstration and rapidly grew to be the largest pro-life event in the world. The peaceful demonstration that has followed on this somber anniversary every year since 1973 is a witness to the truth concerning the greatest human rights violation of our time, abortion.

This event also takes place in the UK. One of the organisers is Isabel Vaughan-Spruce writes:

March for Life UK will be held on Sat 16th May 2015. Start from St Chad's Cathedral Birmingham.


We chose Birmingham simply because it is geographically fairly central and has good transport links & there is some parking here. We work well with the council & local police and have great support from our Archbishop, Bernard Longley who will be attending the march and saying a few words there.

The theme for this year's march is 'Life from conception- No exception!' and we are asking people to bring along their own posters with the theme written on it, this way a clear message is given to the public. We ask that graphic images are not brought along and we reserve the right to ask participants to leave behind at the cathedral any posters deemed inappropriate (this is not to say that we don't think graphic images have their place within the prolife movement - they certainly do, but we feel we can get more of a united front by not using them at least at this stage and it will be clearer that our message is one of love not accusation). we had quite a few postabortive women on last year's march so it is important for us to be sensitive to them also.

We are currently making a short promotional video called 'Make a stand' to encourage (particularly the young) people to come and stand up for life (hence the title of our suggested blog for you). Our website which is being updated is marchforlife.co.uk We will soon have flyers/posters with all necessary details on them so far we have just been giving out 'Save the Date' flyers, (as pictured above).

The key speaker will be abortion survivor Gianna Jessen who is flying over from the USA especially to speak at the march.

One of the aims of the march is to unite the prolife movement which can seem rather fractured in this country - to this end we have tried to involve all the major prolife groups in the UK and have the support of SPUC, APS, 40 Days for Life, Rachel's Vineyard, Precious Life, Forsaken/Revive, Good Counsel Network (probably missed out a few here!).

We also hope the march can be a gateway for those not yet actively involved in prolife work to get involved, to this end we will be having prolife stalls in the Cathedral hall (obviously not in the church - some people have asked this which is why I mention it), we hope newcomers can look at the stalls of various prolife groups and see how they could get more involved.

The march is open to all prolifers but there will be a Christian theme to it eg there will be some Christ centred prayer and music. It is not a Catholic only event.

There will be Mass at the cathedral at 10am for those who wish to go, followed by Eucharistic Adoration to cater for Catholics. Prolife stalls will be from 11-12.15 in the hall, 12.15 -1pm will be live Christian music. 1pm the Archbishop will welcome everyone to the cathedral then the MC's will introduce themselves followed by Gianna's testimony. We will sing a hymn then leave the cathedral at around 2pm and begin the march through the city centre. We arrive at Chamberlain Square where there will be a further short testimony, music & prayer guided by the MCs. People will then disperse & make their own ways to transport etc

We have been promoting the march around the country at different events, eg SPUC conference, Youth 2000, APS events etc and are particularly encouraging people to organise coaches from their areas since this seemed to go well last year and created a great atmosphere for those travelling.

This is an extremely worthwhile event which I strongly recommend you support. It's worth going just to hear the extraordinary testimony of Gianna Jessen, a young woman who survived a saline abortion. She is a singular talent and incredibly passionate about pro-life. You can get a preview of the sort of powerful witness you can expect from her here: