The Pope and the Precipice 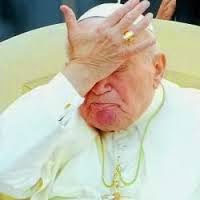 I have just come across this fine and well-balanced article by Ross Southat from the NYT from October 25, 2014. I think it is an excellent summary of the present situation as I outlined in my last post. I do not seek to attack the Holy Father by sharing this with you here, indeed, I do not think this article does that either. It merely points out what is at stake.

The original article has links to other articles and documents. My emphasis and [comments].

"... on communion for the remarried, the stakes are not debatable at all. The Catholic Church was willing to lose the kingdom of England, and by extension the entire English-speaking world, over the principle that when a first marriage is valid a second is adulterous, a position rooted in the specific words of Jesus of Nazareth. To change on that issue, no matter how it was couched, would not be development; it would be contradiction and reversal.

SUCH a reversal would put the church on the brink of a precipice. Of course it would be welcomed by some progressive Catholics and hailed by the secular press. But it would leave many of the church’s bishops and theologians in an untenable position, and it would sow confusion among the church’s orthodox adherents — encouraging doubt and defections, apocalypticism and paranoia (remember there is another pope still living!) and eventually even a real schism. [I think doubt, confusion, etc, is already the case if I'm honest]

Those adherents are, yes, a minority — sometimes a small minority — among self-identified Catholics in the West. But they are the people who have done the most to keep the church vital in an age of institutional decline: who have given their energy and time and money in an era when the church is stained by scandal, who have struggled to raise families and live up to demanding teachings, who have joined the priesthood and religious life in an age when those vocations are not honored as they once were. They have kept the faith amid moral betrayals by their leaders; they do not deserve a theological betrayal. [This I think is the major point. Those who really believe in what the Church teaches are those who will not compromise in support of the pope. Those who only believe what the Church teaches if it is in line with their thinking, or modern secular mores, will never be satisfied until they have reformed the Church into something which is no longer is recognisable as the Body of Christ, but instead seeks to please and comfort as many as possible with differing ideas and articulations of Christian "truth". In short, our claim to truth would be lost in a sea of moral relativism, and our authority to speak about such matters would cease to exist.]

Which is why this pope has incentives to step back from the brink — as his closing remarks to the synod, which aimed for a middle way between the church’s factions, were perhaps designed to do.

Francis is charismatic, popular, widely beloved. He has, until this point, faced strong criticism only from the church’s traditionalist fringe, and managed to unite most Catholics in admiration for his ministry. There are ways that he can shape the church without calling doctrine into question, and avenues he can explore (annulment reform, in particular) that would bring more people back to the sacraments without a crisis. He can be, as he clearly wishes to be, a progressive pope, a pope of social justice — and he does not have to break the church to do it.

But if he seems to be choosing the more dangerous path — if he moves to reassign potential critics in the hierarchy, if he seems to be stacking the next synod’s ranks with supporters of a sweeping change — then conservative Catholics will need a cleareyed understanding of the situation.

They can certainly persist in the belief that God protects the church from self-contradiction. But they might want to consider the possibility that they have a role to play, and that this pope may be preserved from error only if the church itself resists him.

It is the case that the Pope has not made any pronouncements himself which look to change Church teaching. This means that all the speculation could be pointless. However, he has allowed dissenting voices to be heard clearly and failed to issue clarifications himself, regarding the direction the Church is taking. In such a situation it is somewhat inevitable that the theological speculation of ++Kasper, ++Baldesseri, et al, will appear to be gaining greater traction.

This takes place in an environment where it is unusual for Catholic Bishops to speak out and assert the Catholic position (though it does happen). Where loads of money is taken from Church going Catholics and plowed into Catholic Schools which are broadly not interested in Catholic teaching, even shy away from it and try to disown it.

Catholicity is everywhere compromised for fear of upsetting people, as CCFather bemoans in his blog post from yesterday, and those who cling to the faith are increasingly isolated and beleaguered!

However, the project to liberalise and water-down the Catholic faith is sterile and therefore doomed to failure within a couple of generations. Churches are kept alive by the faith of their members, it's fairly obvious if you think about it.