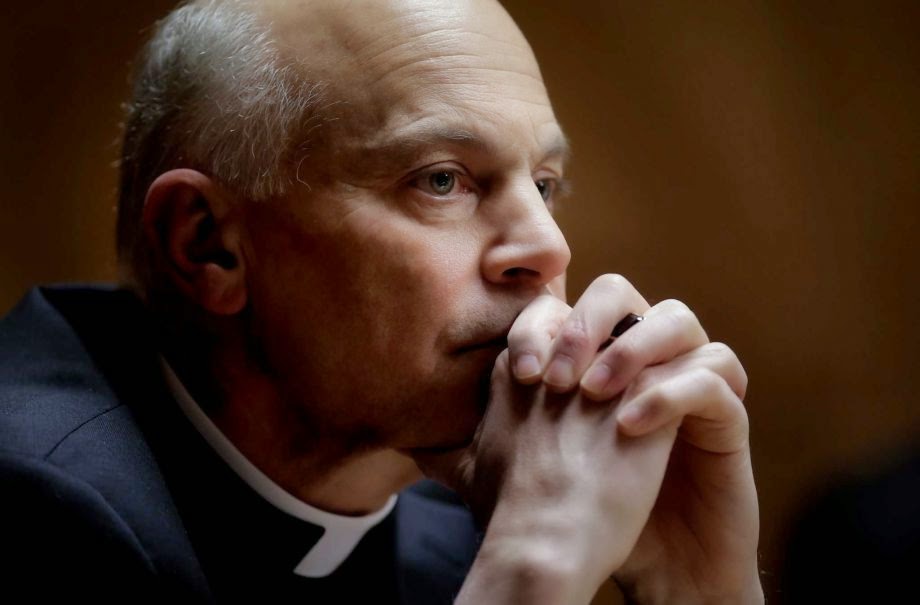 Talking to faithful doctors, professors, monks, nuns, priests, young people and lay people, one theme constantly resurfaces; our wish for faithful prelates, for courageous bishops and archbishops who would be prepared to stand up and defend Church teaching. Well in San Francisco, they have one, and just look at all the stick he is getting. Well, if you wish for proper Catholic leadership, perhaps a good way of showing the Lord that you're serious would be to get behind this man now and support him however you can?


“In an unprecedented move, more than 100 prominent Roman Catholic donors and church members signed a full-page ad running Thursday in The Chronicle that calls on Pope Francis to replace San Francisco Archbishop Salvatore Cordileone for fostering “an atmosphere of division and intolerance.”

Photo number 6 of 13 accompanying The Chronicle’s story was captioned “Archbishop. Your shocking intolerance, homophobia and sexual dread are not much threat at all anymore, and are actually increasingly quaint”, an extraordinarily revealing little side-swipe at the faithful prelate. The reason for this is that the Archbishop is bravely engaged in a fight to retain an authentic Catholic pedagogy in his Catholic schools, as I previously reported here.

Today, Prof. Robert P. George, McCormick Professor of Jurisprudence and Director of the James Madison Program in American Ideals and Institutions at Princeton University has taken the time to pen this brilliant letter to Pope Francis regarding this, now public, and rather vicious attempt to subvert and  subdue authentic Catholic pedagogy. In it, he outlines the situation succintly:

This morning, a group of people published an open letter to you in a San Francisco newspaper urging you to remove Archbishop Cordileone from his office. They identify themselves as Catholics and plead with you to send them a new archbishop that will be true to what they describe as “our values.” But their values, unlike the values proclaimed and upheld by Archbishop Cordileone, are not the values of the Catholic faith. Their complaint against the Archbishop finally comes down to his refusal to bow down before the values of contemporary secularist sexual morality and gender ideology. For this, however, he should be applauded and encouraged, not condemned, much less ousted.

The fact they they consider it is a clever move to appeal to Pope Francis shows how incredibly wrong they are. Firstly, they have failed to comprehend Catholic teaching, secondly, they have decided that the Archbishop is so ignorant of the faith for which he is commissioned with holding and teaching, that they know more than him and thirdly, they assume that the Pope, the leader of the Catholic Church, will side with them--against Catholic teaching--and against the bishop he has put in San Francisco to hold and teach that faith.

++Cordileone knows his craft. He has been a bishop since he received his episcopal consecration from Bishop Robert H. Brom, Bishop Raymond Burke and Bishop Gilbert Espinosa Chávez in 2002. He earned a doctorate in Canon Law in 1989 from the Pontifical Gregorian University in Rome. Initially an Auxiliary Bishop of San Diego, in 2009 Pope Benedict XVI named him the fourth Bishop of Oakland by Pope Benedict XVI.

In January 2011, ++Cordileone was named the chairman of the United States Conference of Catholic Bishops' Ad Hoc Committee for the Defense of Marriage (later renamed a subcommittee) in which capacity he works against the legalisation of same-sex marriage. His mission is described by the USCCB as preserving the definition of marriage as the union between one man and one woman.

Prof. George affirms that those who took out the advert are not:

“prominent Catholics,” as the media describes them, who call on you to remove Archbishop Cordileone do not speak for the faithful Catholics of San Francisco. Already, a movement has emerged to support and encourage the Archbishop. It is a movement of grateful Catholics—not “prominent” people—but ordinary men and women, many of them immigrants or the children of immigrants from many lands. These men and women are grateful to have an archbishop who believes and teaches what the Church believes and teaches. They send their children to the diocesan schools because they desire for them an education imbued with a Christian spirit and shaped by the teachings of the Catholic faith. Their spirits have been lifted by Archbishop Cordileone’s tireless work to ensure that such an education is available to all who desire it.

With gratitude to God for your own witness and ministry, I humbly ask you to join those of us who are supporting and encouraging Archbishop Cordileone. It would be a wonderful thing for you quietly to let him know that he has your blessing, and that the insults and defamations he is experiencing as a result of his faithful apostolic work are a participation in the redemptive suffering of Jesus, who said: “anyone who would be my disciple must take up his cross and follow me.”

Considering the disasterous situation Catholic education is in in our own Country, over run by self-interested "businessists" to use Pope Francis own term, and considering the isolation experienced by any English bishop brave enough to point this out, what is required now is decisive and vocal action from our Holy Father. How simple would it be for him to offer a word of support and encouragement to Archbishop Cordileone? How it would encourage us all and confirm us to hear the Holy Father affirm his brave brother bishop in San Francisco?

The reality that world seems to love Cardinal Danneels, but hates Archbishop Cordileone...Says something doesn't it? These people, seduced by the spirit of the age, by the evil of the world, may think they are winning, but the truth is more important than victory in the temporal melee.

Please pray for Archbishop Cordileone, and please share this story and Prof George's letter, in the hope we might hear from Pope Francis sooner rather than later on this matter. And please sign this petition "I STAND WITH ARCHBISHOP CORDILEONE AGAINST SHAMEFUL ATTACKS!"