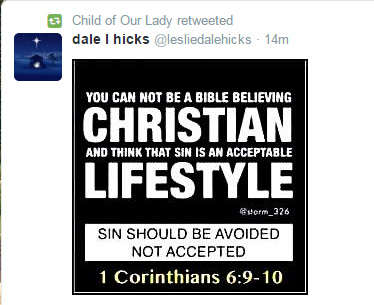 I saw the above tweet today, the first thing it made me do was look up the Scripture:

Of course, classically, if you do not think much of the Bible, you're not going to be too worried about what it says. So it doesn't form much of an argument in any religion to say "Our ancient book says..." it's just not a convincing argument for non-believers for very obvious reasons.


"There are lots of kooky therapies out there for all sorts of things and we don't ban them, we warn against them."

In a very balanced way, the article has two men with same-sex-attraction, who have undergone the therapy. One a really sane homosexual activist (I've no doubt he was utterly objective in his assessment), one a Christian, and therefore a raving lunatic. I think the basic premise underlying the piece is that it is healthy to embrace your sexuality and unhealthy to be in command and control of your desires- which is patently nonsense.

While I do not really know that much about gay conversion therapy, I think the alternative view (i.e. the one that sneers at it) is one that seeks to embrace and normalise same-sex-attraction. Rather than simply say SSA is a serious temptation towards sin, as the tweet I started with does, I think it is probably more helpful to consider why we should avoid sin. Certainly for the reasons St. Paul points out in Corinthians there, but more importantly for non-believers, because it doesn't make you happy.

The belief of advocates of gay conversion therapy is that homosexuality does not make you happy. It makes you unhappy. Christians believe this not because they want to make the lives of gay people miserable, but because they believe we are all made for and by God. Not one of us finds happiness through a selfish embrace of the fleshy distractions we encounter all the time throughout our sojourn on this planet, but rather through coming to know and love God. This is just as true in heterosexual relationships as it is in homosexual ones.

Some heterosexual desires are illegal, some heterosexual desires also constitute a temptation to act in a sinful way - e.g. incest, paedophilia, rape. But would anyone sneer at therapy aimed at curing someone from these tendencies which are both immoral and illegal? So if someone no longer wishes to have SSA, why should they be prevented from accessing suitable therapy? Such therapy will be far cheaper and less traumatic than gender reassignment surgery (which is also irreversible), especially if it leads to a position where they will feel more comfortable and be better able to master their own desires.

If some feel this pull so acutely, that they want to attempt to deal with it through these means, surely that's up to them? Whatever works I say.

Of course, the fact that something is legal (like prostitution for example) does not make it moral. But people who claim that there are no such things as objective moral standards usually seem to be unable to distinguish between illegal and immoral. Political correctness has replaced objective moral standards. We live in a post-modernist society of debased language and logic. Our current crop of politicians and activists and journalists think that they had the Orwellian right to redefine the institution of marriage. They no doubt believe (like Humpty Dumpty) that they have the right to redefine any other terms as well when it suits them.