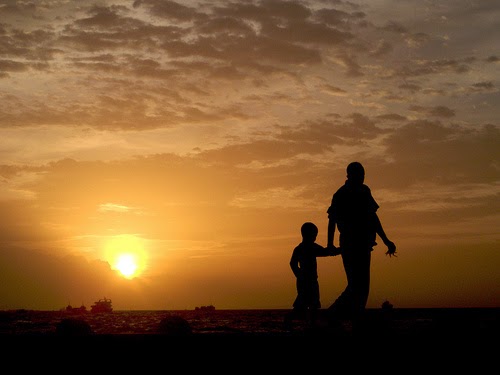 Yesterday was my Father's birthday. I haven't seen him for about 13 years now I suppose. He abandoned my mum, brother and I in the most acrimonious manner in 1999, after it was discovered that he was having an affair with a part-time typist who worked at the business and who is my age. The resulting fallout caused the most dreadful wound in the family which has continued to fester and effect his wife and children in an extraordinarily potent way, ever since.

I always feel melancholy on this day irrespective of how hard I try to ignore it or shut it out. I am grieving, I suppose. Grieving for what I have lost, grieving for what could have been, as well as what was. Fundamentally, an unbreakable bond was broken. Something I was always told could never happen. Something that contradicted all the laws of nature, family, love, everything. A Father abandoned his sons. He told me he wished I was dead. This wasn't just a broken marriage, it was a completely broken family. He didn't just leave my Mother, he left all of us. He left us, and then became the enemy, attacking us.

All the concerns, all the suspicions, all the niggles and instincts that things were not quite right, that he was not what he purported to be, were verified with terrible finality. It was like the world literally ended, like the Sun stopped shining, like the world stopped spinning. Everything changed forever, not least what it means to be "family".

In the Greek language, Father literally means nourisher, protector or upholder. Sacred Scripture presents the concept of fatherhood in several ways: (1) headship-generating and establishing a household; (2) feeding - nourishing or protecting his offspring; (3) maintenance - upholding that which he established. My own concept of Fatherhood cannot be based on my experience of a Father, because he was someone who hurt and betrayed me possibly more than anyone else could have ever done; human frailty is primarily manifest in the most intimate relationships and wounds most deeply those whom we are to love most fully. What relationship could be more perfect in our imagining than the relationship between a parent and child? I don't mean perfect in the every day sense of "getting along". rather I mean in the ultimate depth of connection between two souls. Someone once said to me that each child is a little soul who travels with you to eternity. By the bond of parenthood, you are irrevocably bound to another person for eternity, whether you, or they, like it or not! You can pretend it is not the case, but ultimately your objective reality is you have one set of biological parents. I think once you recognise that reality, you recognise the responsibility that comes along with parenthood to make the best of that relationship you can.

My experience of being a child is one of failed aspirations and disappointment at a Father who never lived up to his own espoused ideals. I outgrew him at a very young age, not in terms of no longer loving him, but recognising his reluctance to engage with me as the cowardice it was and not the academic distain he tried to portray it as. Instead of recognising who I was becoming and holding me up to reach for the stars, he desperately clawed at me, trying to hold me back and drag me down. Sabotaging my reputation with my own friends and family members, desperately trying to control me and stop me from spreading my wings. When he left, the shackles finally fell away and I was free to do all the things that I had wanted to. I made excellent and immediate progress in business, in my friendships and academically. But most of all, what happened made me determined to be a better Father myself. I made a conscious decision to be the best Father to my children I could be, to spend time with them, to always support them and praise them, to be proud of them, to hug them, to grow with them, to recognise their individual genius, and to never-ever let them down the way I was let down. Losing my daughter has compounded my realisation that being a parent is not about you, but about them; it's a great privilege and duty which I stand in awe of.

Because of my own disaster, I really recognise how important a father is to a son. I realise how much I loved him and how much I looked up to him, even when his behaviour was irrational or hurt me.

Anyway, despite all of this sadness that lives in my heart, I can't help but love my dad and miss him. Perhaps I miss the man I wish he was, or who he could have been. The beloved Grandfather his own Father was to me, to my own children. But I guess that's up to me too now.