Saint Lambert, Pray For Us! 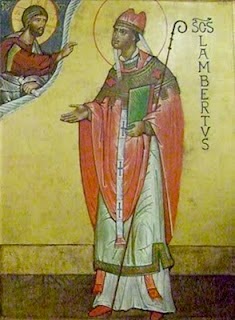 Today is the Feast of St. Lambert de Lyon, so I am sort of claiming it as my saints day.

St. Lambert was a Benedictine archbishop raised in the court of the Frankish king Clotaire III. He became a monk at Fontenelles, France, under St. Wandrille and succeeded him as abbot in 666. After founding the abbey of Donzere, Lambert was named archbishop of Lyons.

Lambert was born in the diocese of Thérouanne. He was raised in a rather secular manner, according to the rank that his birth dictated at that time. His parents sent him to the court of France whilst he was still quite young, and here his good qualities soon won the esteem of the nobility. He was highly regarded by the young King Clotaire III; the door to great honor would open for him when he renounced all the advantages of the court, to serve God and work more freely for the salvation of his soul.

He placed himself under the discipline of the famous holy abbot Wandrille, who ruled the monastery of Fontenelles at Caux. They cut his hair and clothed him in the monastic habit, and he distinguished himself so much by the innocence of his manners and holiness of all his conduct, that after the death of Wandrille, he was elected to succeed him ( 665).

The wisdom he published during his administration built a strong reputation for St. Lambert in a very short space of time. The royal court, which had once admired his fine qualities in both body and mind, now came to admire his virtue, and considered him a great servant of God.

The kings wanted to follow his example and sought his opinion. Childebert II honored him particularly, had complete confidence in him and made large donations to the abbey. King Thierry, who succeeded his brother in 673, was no less friendly or less generous towards our Saint. He gave him, among other things, the land of Donzère, on the Rhone, in the Vivarais, where Lambert built a monastery. Among the disciples he made there included his uncle, Albert, St. Erbland, who he sent to the diocese of Nantes, to be the first abbot of 'Aindre; St. Erembert, who left his bishopric of Toulouse to come Fontenelles in order to serve God under his leadership.

Lambert was sent to the Church of St. Genesius in Lyon after it lost its bishop in about the year 679, on the recommendation of the king, and with the consent of the clergy and the people.

Sadly the history of the second part of the life of the Saint has been lost to time. We do not know the details of his episcopate. However, we read in the history of Vivarais, that St. Lambert loved to come and relax in the retirement of silence at the Abbey of Donzère, in the diocese of Viviers, which he founded is still abbot of Fontenelle . The monastery of Donzère disappeared in the invasion of the Saracens. As Saint Lambert he died about the year 688.