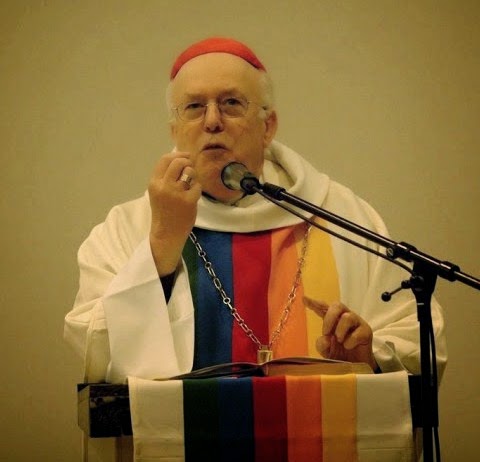 Cardinal Godfried Danneels is a name synonymous with "progressive" ideas and (as seems to always be the case) the associated decline in faith and vocations. The 81 year old was the top "progressive" papabile in the 2005 conclave, however, a couple years later his reputation nose-dived as it was revealed that he knew of the sexual abuse of children by priests in his diocese, yet did nothing. Thankfully, even "progressives", who appear to hate what the Church stands for on so many levels, recognise that this is unacceptable.


Danneels has been demonstrably responsible for the decline in vocations and of the faith in general in Belgium as I noted here. He publicly questioned the Church’s teachings on the ordination of women, homosexuality, and contraception, and, in this period, Belgian Mass attendance fell to between 5 and 10 percent. Belgium was among the first nations to legalise abortion on demand, euthanasia, and same-sex marriage—with little Catholic opposition. Priest shortages became endemic. Once a world capital of Catholic learning, the Catholic University of Leuven today makes Georgetown look like Ave Maria.

Many of us were shocked and saddened, therefore, to hear that Pope Francis had selected Danneels as one of his personal choices for the 2014 Synod on the family. The selection was, frankly, remarkable, not only because Danneels was actually caught on tape in 2010 urging a victim who had been sexually abused by a bishop-friend of his to be silent. But also because He praised as a “positive development” that states were opening up civil marriage to homosexuals.

Rorate Caeli now reveals that two Belgian politicians have admitted for the first time openly that Cardinal Godfried Danneels tried to convince King Baudouin to sign the law on abortion in 1990.

Former politicians Philippe Moureau (PS, Parti Socialiste) and Mark Eyskens (CVP, Flemish Christian Democrats) said this in a documentary for the Flemish Broadcasting Corporation VTMon April 6, 2015 (http://nieuws.vtm.be/binnenland/135916-25-jaar-abortuswet-boudewijn-onder-druk, at 2:05). According to VTM, cardinal Danneels did not want to comment.

A memorandum of the Congregation for the Doctrine of the Faith on "Worthiness to Receive Holy Communion", signed by its Prefect, the then Cardinal Joseph Ratzinger and published in July 2004, declared that, if a Catholic politician's formal cooperation in "the grave sin of abortion or euthanasia" becomes manifest by "consistently campaigning and voting for permissive abortion and euthanasia laws", the politician's pastor is obliged to instruct the politician about the Church's teaching and inform him that he should not present himself for Holy Communion as long as the objective situation of sin (regardless of whether subjective guilt exists or is absent) persists, warning him that, if he does present himself in those circumstances, he will be refused. As in the case of divorced and remarried Catholics, if these precautionary measures fail to obtain the desired effect or are impossible, "and the person in question, with obstinate persistence, still presents himself to receive the Holy Eucharist, 'the minister of Holy Communion must refuse to distribute it'"

So one cannot help but wonder what this means for the retired Cardinal? Has he excommunicated himself? Who will be the pastor to tell him he cannot receive Holy Communion?

Archbishop André-Joseph Léonard succeeded Danneels as primate of Belgium in 2010 and made changes that really turned things around dramatically. As the Rorate article states, he will be handing in his retirement letter this year. I pray that they might replace him with someone who will carry on the good work.

The fact that Cardinal Danneels drove decent parents to have to protest against his sex ed material (which verged on the pornographic) outside his residence and then to leave these poor parents to have to try and face down the Nuncio who in turn had Belgian police ready round the corner from his house with water cannons loaded to fire on them in defense of the innocent souls of their children is the far greater sin crying to heaven against him for vengeance in my view...for denying the primary educator their inalienable rights before God as he and countless other churchmen do the world over with their morally corrupting sex ed classes in their schools is like unto the worker deprived of his wages..... it is THIS issue that needs more and more attention -in my view- from within the blogosphere....and we need the unmistakable power and efficacy of innocent childrens prayers to help us defeat this Goliath.

We’ve got to do do something about this now. These are the issues which are having a serious and deadly affect on our society and is extremely corrosive for families in so many ways. Even the secular world is starting to realise this.

Just read following stats:
It is as Michael O’Brien, Canadian Catholic author, describes it: “a plague of epic proportions”. So in the absence of anything concrete from bishops I think we need to stir parental power and righteous anger, we must see that if parents don’t do something NOW to restore a culture of purity of heart mind and chastity of body in the home then their toddlers [yes toddlers] are going to be THE next even bigger wave of victims of this plague within a short space of time, not least because of the perverted campaign to tackle the porn issue by making sex ed compulsory in primary schools etc.


Parents have to be made to be able to see the critical truth of the following authoritative teachings:

31. The believer has an absolute right to profess his Faith and live according to its dictates. Laws which impede this profession and practice of Faith are against natural law. Parents who are earnest and conscious of their educative duties, have a primary right to the education of the children God has given them in the spirit of their Faith, and according to its prescriptions. Laws and measures which in school questions fail to respect this freedom of the parents go against natural law, and are immoral.


39. We address Our special greetings to the Catholic parents. Their rights and duties as educators, conferred on them by God, are at present the stake of a campaign pregnant with consequences. The Church cannot wait to deplore the devastation of its altars, the destruction of its temples, if an education, hostile to Christ, is to profane the temple of the child's soul consecrated by baptism, and extinguish the eternal light of the faith in Christ for the sake of counterfeit light alien to the Cross. Then the violation of temples is nigh, and it will be every one's duty to sever his responsibility from the opposite camp, and free his conscience from guilty cooperation with such corruption. The more the enemies attempt to disguise their designs, the more a distrustful vigilance will be needed, in the light of bitter experience. Religious lessons maintained for the sake of appearances, controlled by unauthorized men, within the frame of an educational system which systematically works against religion, do not justify a vote in favor of non-confessional schools. We know, dear Catholic parents, that your vote was not free, for a free and secret vote would have meant the triumph of the Catholic schools. Therefore, we shall never cease frankly to represent to the responsible authorities the iniquity of the pressure brought to bear on you and the duty of respecting the freedom of education. Yet do not forget this: none can free you from the responsibility God has placed on you over your children. None of your oppressors, who pretend to relieve you of your duties can answer for you to the eternal Judge, when he will ask: "Where are those I confided to you?" May every one of you be able to answer: "Of them whom thou hast given me, I have not lost any one" (John xviii. 9).

Pius XI Mit Brennender Sorge (With Burning Anxiety) March 14 1937 (the encyclical that caused Hitler to go in to such a rage that he refused to speak to anyone for 3 whole days!).