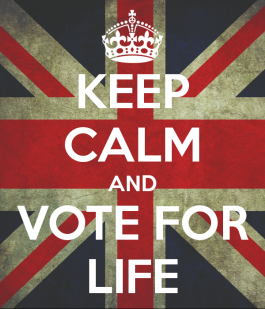 Yesterday I posted an article by Deacon Nick Donnelly bemoaning the current state of British politics. As we approach a General Election which many commentators consider will constitute a key change in the political landscape of our country, faithful Catholics feel marginalised and disenfranchised with the political system. In this, we are not alone, but the reasons we feel this way are probably minority issues which contradict directly the direction of social change adopted by the main parties.

The apathy and disaffection felt by the rest of society is, interestingly, having the same effect as it is on Catholics—pushing us out to the fringes as we feel increasingly abandoned by mainstream parties. On Twitter today, the fallout from Nick's article yesterday is a discussion about the merits or otherwise, of supporting UKIP.

Lucas Cambrensis has provided his own response to the feelings of disenfranchisement resulting from the political process in which he draws attention to the CBEW letter:


As with most major elections, the Bishops Conference of England and Wales have released a letter [3] which it believes highlights the most pressing issues for Catholics. Though I have found some previous letters poorly veiled attempts to support a particular party (Tony Blair's New Labour for example) or lacking in a fully Catholic vision, this year I think it's balanced, helpful and prescient. The headings alone match most of my concerns for this election: Respecting life, Supporting marriage and family life; alleviating poverty, Educating for the good of all, Building communities, Caring for the world.

Last weekend a similar pastoral letter which was read at all 500 Catholic churches was issued by Scotland's Catholic Bishops and urged parishioners to participate in the 2015 General Election and to be informed by the teachings of the Church. The full document can be read here.

I was especially impressed by the focus on the sanctity of human life, which was high-lighted in the document as the "fundamental issue". If every Catholic in Britain canvassed their MP on the way they will vote with regard to abortion and euthanasia, there's no doubt that Parliament would better understand the depth of feeling with regard to these issues. However, in a country where almost 200, 000 abortions are carried out each year, I wonder if most Catholics have either accepted it as part of life, or have just stopped caring?


"The dignity and value of every human being should be at the heart of politics. The sanctity of human life, protected from its beginning to its natural end is not a single issue. It is the fundamental issue. It demands that we proclaim the Gospel of Life in all places and at all times, for is human life is not sacrosanct then no other human right makes any sense at all.

"Laws which permit abortion, euthanasia and assisted suicide are profoundly unjust. We do not want to accept the continued existence in our society of such fundamental violations of human rights and we commit ourselves to work peacefully and tirelessly to oppose and to change them." [emphasis mine].

I thought this was most excellent. It clearly makes a stand against morally untenable positions in a way which stands out and clearly states what is at the heart of a Catholic approach. This did make me wonder how many Catholics would agree with the words above? My son was recently labelled "an extremist" for arguing for a pro-life position in school. The school made clear to me that there were students who held different views to Michael, as the school accommodates students of all faiths and none. This is indeed an admirable attitude, but only insofar as we recognise it as a point of evangelisation. The school should be holding to the fundamental pro life principles, not criticising students who do? Surely the school has a duty, especially on this issue, to constantly explain the pro life message? In fact, I would go as far as saying, if our schools are failing to teach these basic and essential Catholic principles, we would be better to close them and spend the enormous amounts of money elsewhere.

So what do we do?

Well, first of all I think it is essential that we do not concede to apathy, but that we engage with the political process. I think we need to write to our candidates and ask them where they stand on the essential Catholic issues as stated by the Scottish bishops above. I think we need to vote for those who most closely represent an authentic Catholic position, individual by individual. I do not think we should see this as condoning party policy, but filling up Parliament with members who will represent our views.

For example, I will be voting for Sir David Amess. Not because I support a Tory party who slipped so called "gay marriage" into legislation without proposing it in their manifesto, but because he has consistently voted against that measure and for life.

Peter Williams, Executive Officer of Right to Life is also advocating this approach. He states:


In order for the right-to-life movement to really have an effect on British politics therefore, each of us needs to vote not merely on our preferences for individual parties, but on the beliefs of each candidate. That might mean that, for example, someone who normally votes Labour should vote for a right-to-life supporting Conservative, or a staunch Tory should vote for a right-to-life supporting Labour or Liberal Democrat candidate. ‘Candidate, not party’, should be our mantra.

To help us find out our candidate's record on these issues, SPUC have produced a very useful tool which will help you to discern:

There is also this independent website Where do they Stand? which is a very useful tool for discerning how best to vote. It is a voluntary, public site, that draws on information provided by private individuals based on conversations with or letters they will have received from their local candidates. For many constituencies, no record will be available, as no-one who lives there has yet asked their local candidates what they believe on the life issues. For right-to-lifers then, there is an important job to do.

Most of all, I would say get involved in politics, let your local candidates know you are engaged with the process, you will be voting and what is important to you, then get out there and have your say!