Twilight of the godless 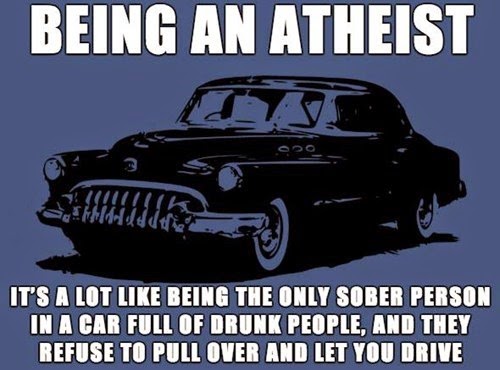 There was a particularly interesting comment on page 3 of the print version this week's Catholic Herald which really caught my attention. It noted how the world's leading research organisation predicts that Atheists and Agnostics will make up a declining share of the world's population in the coming years, falling from their current 16% to just over 13% by 2050.

This struck me as being somewhat at odds with received opinion, at least received opinion here in Essex. I would have said that those with faith are increasingly marginalised, while Atheism appears to have unstoppable momentum and has become the smart choice for a generation who want some way to rationalise and justify what tends to be selfish and destructive behaviour (see here for example).

The article goes on to explain how, in fact, I live in a little bubble of self-deceipt here in Western Europe. Nowhere has the decline of religion been felt more keenly than here in Britain. Further, it is broadly perceived by the population as the inevitable product of modernity. Meanwhile,


"in the wider world, godless Westerners are increasingly becoming a curious and eccentric minority."

Secularism May have won the culture wars in the West, to the extent that believers increasingly feel uncomfortable even discussing religion in public, but non-belief remains hampered by a fatal weakness. While being a believer makes you either an eccentric curiosity or a bit of a nutter to be avoided here in England, the one clear advantage we have is that we are breeding. Atheism, meanwhile, is afflicted by a decidedly anti-Darwinian lack of interest in procreation. It is sterile, and therefore must attract new members in order to expand, Islam, Christianity and Hinduism do not.

Personally, I think to reduce the difference in numbers between believers and unbelievers to procreation, that is, a numbers game dependent on who has the most influence over who, is to deny what seems an obvious reality. That we bear an irreducible seed of eternity deep inside us all that constantly speaks to our deepest being of our eternal destiny. This eternal destiny is an intrinsic part of who and what we are. We express it as a desire for God; who made us for Himself.


man is created by God and for God; and God never ceases to draw man to himself. Only in God will he find the truth and happiness he never stops searching for. ~ CCC27

Throughout history human beings have given expression to their quest for God in their religious beliefs and behavior: in their prayers, sacrifices, rituals, meditations, and so forth. These forms of religious expression, despite the ambiguities they often bring with them, are so universal that one may well call man a religious being. Religion is an intrinsic dimension to the human condition.

I am someone who has always had a hunger for knowledge of God. I have always known God in my heart and sought to understand and deepen that relationship. The result of deepening that relationship and working on understanding what God has revealed to the world about Himself and about the meaning of life has resulted in a great deal of happiness and satisfaction for me. This continues to grow in my heart, God continues to work in my life and on me as a person. I am alive to this process and relish it, bending my will to it, inviting it, capitulating before it. It presents me with answers to impossible questions; aids me in my relationships, with my wife, with my children, in my business dealings. Being a Catholic is immensely satisfying and rewarding and I would highly recommend you give it a try!
atheism