Voting With The Crowd...


Voting against Church teaching and with the Zeitgeist: the "spirit of the age" may be popular with a generation who have been starved of any Catholic education, but we all know where this policy leads... 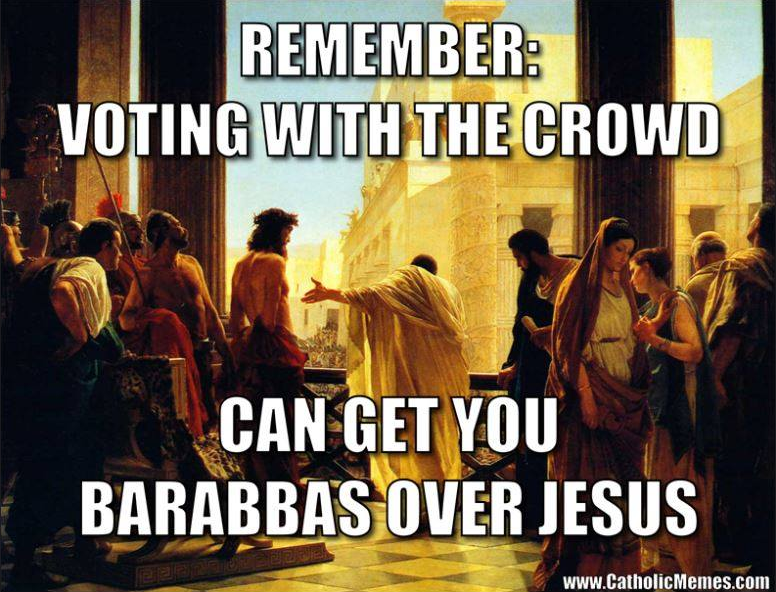 And, if Sandro Magister is right (and he often is), and the Pope is beginning to promote and articulate an anti-Marx line, the time-servers (as it were) at the Vatican will no doubt coalesce around this new line from Rome. This will mean that Cardinal Nichols may quickly find himself out on a limb.

The letter from the 461 has certainly got him rattled. He dedicated his Chrism Mass lecture homily to a directive on how to view the process:


“It is wrong, in my view, to think or speak of this Synod as a battle, a battle between contesting sides. Battles have winners and losers. And often ‘collateral damage’ is the most tragic consequence of hostilities,”

“This synod is a time of prayerful discernment, discernment about how we are to bring the love, mercy and truth of God to all people in need, in so many different and difficult circumstances. So please do pray for the guidance of the Holy Spirit.”

He certainly seems unhappy about that letter! However, his comments above being the case, why did he give an interview on BBC Radio 4’s Sunday Programme, in which he made clear that he did not support the paragraph in the Synod’s concluding report on homosexuality, because it did not go far enough in expressing the need to “respect, welcome and value” homosexuals?

Why, in a press conference on Tuesday 21 October did he claim that his thinking on the question of second ‘marriages’ had developed and deepened during the Synod. He said he now understood the idea of a ‘penitential journey’ for those in so-called ‘second marriages’, that a broken sacramental marriage “remains a source of grace” for ‘remarried’ persons “as they carry on making the best of their lives with all sincerity and integrity”.

As we examined last Saturday, this is not any sort of journey he made over the last few months. It is the exact same thing taught by disgraced theologian Charles Curran who Cardinal Nichols invited to lecture at the UNI in 1981 and his disciple in this country, Kevin Kelly, Cardinal Nichol's predecessor as head of the UNI.

Going back to the press conference, at this point Cardinal Nichols starts to sail rather close to the wind as one of the journalists (named Andrew) asks the Cardinal:

‘The Church looks with love upon those who participate in Her life in an incomplete way, recognising that the grace of God is at work in their lives, giving them courage to live a good life, to take a loving care the one for the other, and to be in generous service of the communities in which they live and work.’

So there’s quite an explicit statement that we recognise the grace of God present in their lives.”

The journalist then says:


“To put it another way, we’ve come a long way from Brideshead Revisited.”


(chuckling) “Thank you Andrew, yeah, yeah, yeah. So that’s the kind of paragraph which catches up, and develops actually, the interim report quite well.”

John Smeaton has the following insight into this exchange: Brideshead Revisited is the famous novel of Evelyn Waugh, the Catholic writer, who himself had experienced divorce and a ‘second’ marriage, albeit a valid one following the Church’s granting of an annulment of the ‘first’ marriage. In the novel, Lady Julia Flyte, a Catholic going through divorce proceedings, decides not to marry her lover, Captain Charles Ryder, an agnostic who is also going through divorce proceedings. Lady Julia eventually takes to heart her brother’s accusation that she is “living in sin” with Ryder, and recognises that to ‘marry’ him would be “to set up a rival good to God’s”.

This is a most Catholic insight into the divine law of marriage, taught by Christ in the Gospels and taught infallibly by the Church down the ages.

One would be surprised if Cardinal Nichols did not understand fully the journalist’s reference to Brideshead Revisited, perhaps the most famous Catholic novel of the 20th century. It was published in 1945, the year of the cardinal’s birth. He studied for the priesthood in Rome during the Second Vatican Council, of which Waugh was a public critic. Waugh died in 1966, the year after the end of the Council and half-way through Vincent Nichol’s priestly education. As a specialist in Catholic education since the early 1970s, one assumes that Cardinal Nichols would be well aware of the keen interest which many young Catholics have shown over the decades in the novel. And that is not to mention the huge popularity of the 1981 television adaptation.

Those who have observed Cardinal Nichols closely over many years have noted his tendency to switch between statements of orthodoxy and statements giving succour to liberal agendas, such as those made during the press conference. This is a very grave matter for the faithful of England and Wales as the Church starts preparing for next year’s Ordinary Synod on the Family.

Why? Because the very best we can say is that the Cardinal is anything but clear on a huge range of fundamental issues. Way back as far as 2013, the Cardinal was telling us "who knows what's down the road?" in respect of sanctioning gay "marriages"!

Whenever there is heresy being pushed as Catholic doctrine the Church has risen up as one to condemn it. Let us hope and pray that at this Synod, we once and for all, see this heretical agenda consigned to the rubbish heap of the sixties sexual revolution.

However, as I began by saying, it could be his affinity for this counter-catholic ideology (remembering the then Cardinal Ratzinger's letter to Charles Curran) which may well end up leaving him out there on his own.

May St Michael the Archangel protect us!