Pope to Families: Stand up to Ideological Attacks! 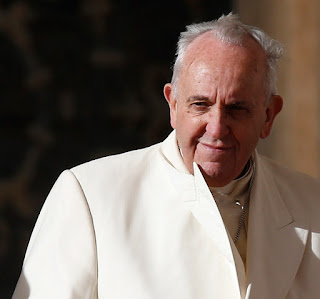 Vatican Radio tells us how, on Sunday evening, in St Peter's Square, Pope Francis urged parents and families to stand up to "ideological colonisations that poison the soul." He was speaking to around 25,000 people from the dioceses of Rome, for the opening of the Diocese's annual Ecclesial Convention, dedicated this year to the theme of the family. Cardinal Vicar Agostino Vallini was present, together with many Catholic families and a high percentage of the 350 parish priests of Rome.

During his address, Pope Francis touched on many issues including the need for a "spiritual rebirth" for the city of Rome which is currently shaken by a corruption scandal involving municipal authorities. But his focus was mostly on the family and on the Synod of Bishops on the Family to be held in the Vatican in October, and he appealed to the many parents present to safeguard their children from ideological attacks against the institution of the family and all that is sacred which, he said, "are so hurtful and destroy society, the Nation, families."

Pope Francis elaborated on the beauty and diversity of male and female characteristics and said "complementarity and reciprocity" within families are very important for the healthy growth of children, who must not be afraid of differences and must witness the joy of conjugal love in order to grow and develop with confidence and security.

He also turned his attention to couples who separate, urging them never to forget their duties as parents. "Do not speak ill of each other. That's how children learn how to be hypocritical and to take advantage of others." he said.

The Pope also had words for the over 600 thousand grandparents who live in Rome and whom, he said, must be loved and respected. He appealed to families to consider the option of old-age homes for grandparents only as a last resort.

And noting that a fourth of the population in Rome is elderly, the Pope asked: "Are grandparents treated with respect? I am sure they are at the moment because with the current lack of employment, it is to them and to their pensions that one turns for help."

The Pope is sounding increasingly Catholic as we approach the Synod, wasting no opportunity to underline the principles continuously held and taught by the Church.
family Pope Farncis Synod2015