The Battle Against Lust 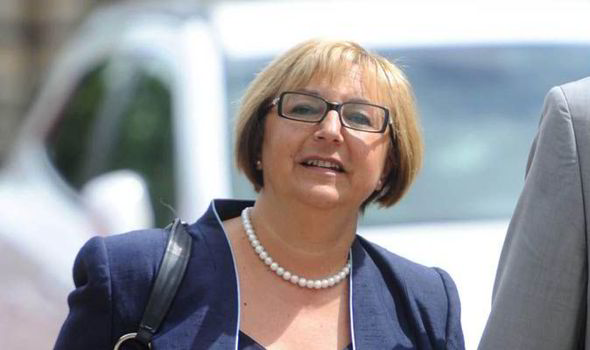 The shocking case of Anne Lakey, a nationally acclaimed head teacher who had sex with two boys in her care, one fifteen, one just thirteen, seems to demonstrate just what is at stake if we fail to recognise the dangers of lust.

I think this is an increasing problem in our society today, which accepts all forms of lust as part of our natural make up. In our post-Freudian culture, we are told to embrace our urges; they're natural! But this is clearly a lie. In reality, we must often curb our lusts and desires and temper our feelings with discernment and reasoning about the consequences of pursuing our fleshy desires for ourselves and for the object of our desire. This is certainly true if we suffer disordered urges, but applies to all of us to some extent. Indeed, this is what the Ninth Commandment is all about:

St. John (1 Jn 2:16) distinguishes three kinds of covetousness or concupiscence: lust of the flesh, lust of the eyes, and pride of life. In the Catholic catechetical tradition, the ninth commandment forbids carnal concupiscence; the tenth forbids coveting another's goods. Etymologically, "concupiscence" can refer to any intense form of human desire. Christian theology has given it a particular meaning: the movement of the sensitive appetite contrary to the operation of the human reason. The apostle St. Paul identifies it with the rebellion of the "flesh" against the "spirit." (Gal 5:16,17,24; Eph 2:3).Concupiscence stems from the disobedience of the first sin. It unsettles man's moral faculties and, without being in itself an offense, inclines man to commit sins (Cf. Gen 3:11; Council of Trent: DS 1515).

Anne Lakey had been a national leader in education, lauded for improving pupils' exam performance. Judge Crowson told Lakey her sentence would "destroy the career you have worked so hard to build". Of course, Lakey taught RE! It just goes to show that you can not measure success purely by such sterile measurements as OFSTED inspections and exam results.

Does Lakey's story shock us? In a society that is so preoccupied with sex and sexual pleasure, many people, even good Catholics, can become ensnared in the trap of slavery to sex. So we are probably only shocked insofar as she was in a position of extreme trust as head of a school. My point here really is that, irrespective of her position, Lakey put her own predatory desires before all else and lust is like that; insidious, deceptive, manipulating, controlling; it enslaves us through addiction. Lust in all its forms, including masturbation, pornography, promiscuity or adulterous relationships kills the soul.

Our culture tells us that "stuff" makes us happy. If you are unhappy, you have to fill that hole in yourself with more "stuff". Stuff like money, iphones, food or sex. But you more than likely know, reading this, than when you've got, or done the "stuff", all that's left is a big fat gaping hole. In reality, money, iphones, food or sex are only an attempt to fill the emptiness in our hearts where God should be. Saint Augustine, who also struggled with promiscuity and lust before his conversion, understood this when he finally came to know the Lord and said

“You have made us for Yourself, O Lord, and our hearts are restless, until they rest in You.”

It seems obvious to me that lust constitutes a huge problem in our society. I would go so far as to suggest that it could be the greatest contributor to the destruction of marriages and families. Sex sells and the explosion of technology and the internet has made our lusts avaliable, private and immediate. The selling of the human body has become big, big business and it feeds on the brokenness of men and women.

Lust is an inordinate desire for sexual pleasure and involves engaging in the sexual act outside the context of God’s intended purpose of marital communion. Saint Augustine teaches us that when we indulge in the sins of the flesh, as with any mortal sin, the intellect becomes darkened and God cannot be seen or recognised as Truth. In fact, the allure of lust will lead people to commit a wide variety of subsequent sins.

When a person is lost in lust, they become enslaved to this obsessive desire and their understanding of good becomes obscured. In his Summa Theologica, St. Thomas Aquinas said

“this act (simple understanding) is hindered by lust, according to Daniel 13:56, ‘Beauty hath deceived thee, and lust hath perverted thy heart.’ In this respect we have ‘blindness of mind.’.”

Because lust clouds even simple understanding, this blindness will affect every aspect of a person’s life.

Are we shocked at Anne Lakey? Well, people often wonder how anyone could commit the sin of sexually abusing a child. But since lust cuts a person off from God and their intellect becomes blinded, that person loses their ability to correctly judge right and wrong. He (or she) acts out for one purpose: to fulfill their own sexual pleasure. As is the case with any addiction, the addict will often neglect family, employment, and any other responsibility in order to pursue the distorted desire, even when they recognise the destructive nature of his compulsion. Simply put, lust destroys a person’s humanity.

It is important to point out that a person enslaved to this sexual sin does not start out to become as sexual addict nor do all who lust become sexual predators. Yet, even a person who only indulges in lust occasionally can have his life and relationships negatively affected.

At Fatima, Our Blessed Mother taught that impurity is the cause of the damnation of most people (this is because they are the least serious of sins, but the easiest to fall into). Immodest fashions have been ruining souls for 100 years. Divorce and re-marriage, “trial marriages,” and birth control—accepted as normal behavior by most people today—are corruptions of Holy Matrimony. They are also mortal sins that will damn your soul.

It’s not hard to understand that darkness of the mind, hardness of the heart, hatred of religion, and disbelief, lead to despair and sometimes to final impenitence, which of course, is a serious sin against the Holy Spirit. Could this be why our Blessed Mother at Fatima said that ‘More souls go to hell for sins of the flesh than any other reason’?

I think we have forgotten how to fight against this because our culture is so saturated with sexual imagery and indulges all kinds of immodesty and impropriety as healthy and normal. This is a battle we must have the courage to take up. We must educate our children about it; to do so will benefit us in powerful ways with regard to marriage and the family. The CCC teaches us of this battle:


Baptism confers on its recipient the grace of purification from all sins. But the baptized must continue to struggle against concupiscence of the flesh and disordered desires. With God's grace he will prevail
- by the virtue and gift of chastity, for chastity lets us love with upright and undivided heart;
- by purity of intention which consists in seeking the true end of man: with simplicity of vision, the baptized person seeks to find and to fulfill God's will in everything;313
- by purity of vision, external and internal; by discipline of feelings and imagination; by refusing all complicity in impure thoughts that incline us to turn aside from the path of God's commandments: "Appearance arouses yearning in fools";
- by prayer ~CCC 2520