A Day on the Family in Ealing 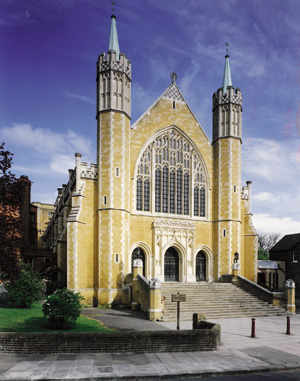 I'm feeling on top of the world this morning, home from Mass and after a wonderful day yesterday at Ealing Abbey for the Guild of Our Lady & St. Joseph's day of Catholic study on The Family: The Fundamental Cell of Society. I was privileged to have the company of my son Mike and a couple of friends, Joao Pereira and Paul Abbot, and we all traveled up from Essex together. We got there in time for Mass with the Benedictines, celebrated by one Brother who was 60 years a priest on that day!

Initially, the take up for this day was low. This wasn't a surprise; the day clashed with the Proclaim15 event in Birmingham and the LMS AGM at Westminster Cathedral. We also did not have any "star speaker", the last Guild Day I attended in Soho, we had Bishop Phillip Egan, who no doubt drew a crowd just to see him. Despite these issues, we received a good number of registrations in the week running up to the event and quite a number of people showed up on the day.

Based on conversations with various people today, I think the timeliness of the topic really attracted people to attend today's session. We did lose a few to Proclaim 15 but not a significant number. The mid-July date was more problematic for many as they were either on holiday or, in the case of several priests, they could not find cover with so many others on vacation at this time.


Many attendees were not Guild members and I think a few enrolled on the spot. We were delighted to have had four seminarians, two students and two priests (apart from the speakers) amongst the attendees. A good number of dioceses were represented including A&B, Brentwood, Salford, Northampton, East Anglia, Portsmouth, and Westminster.

The three presenters: Fr. Francesco Donega, Fr. Anthony Doe and Dr. Peter Kahn each gave inspiring and insightful presentations on marriage and family. I "live-tweeted" throughout the three sessions and you can get a flavour of the day by scanning my tweets (@sitsio).

Fr. Francesco's presentation on Marriage was most informative and enlightening regarding the sacramental nature of Catholic Marriage and how the Sacrament builds on Baptism. Fr. also explained how the rite itself is pedagogical and went through what we can learn from the language used.

Fr. Anthony Doe, a practicing psychotherapist, gave a most inspiring & fascinating address on the importance of chastity. It covered a wide area of anthropological interest, including an in depth explanation of the way in which human psyche relates to sexuality, how sin works on and with our sexuality to deform it and how best to conform our sexual impulse to a positive role; in other words, that for which it was designed. He spoke about the way in which the physical dimension to our sexual impulse dominates in modern culture, but the importance of the spiritual dimension must not be lost.

During the course of his presentation, Dr. Kahn spoke about the role of the family in the New Evangelisation, including the neccesity of seeing our relationships as hearts next to hearts; the inspirational nature of the Catholic family and how, just by its being, it inspires others in faith. He also introduced ideas of relinquishing control; about the way in which our futile desire to control our lives drives much of the sadness and slavery we subject ourselves to in life. Life is about being a family; our faith is societal, it is about community, being community and living in community. Our goal is ultimate community: Heaven, where our communion will be perfect, devoid of rivalry and jealousy, where our life in the Trinity will be about wishing the very best for each other. Dr. Kahn also spoke about SoTA, his love of the school and of the people who form the faculty there. As a father of seven, he has valuable experience in the great joy of managing a large family and the work life balance, so it was very interesting, as a father myself, to hear his perspective.

Carol Ann Harnett spoke about the CFC after Dr. Kahn's presentation and also mentioned other courses offered through the school. In an effort to raise awareness further about the work of the School, each registrant received flyers and the programme included details of upcoming courses along with a note of welcome from Father Guy.

Besides the presenters, the attendees had the opportunity to view the recently launched DVD on Marriage (St Anthony's Communications in collaboration with the Confraternity of Catholic Clergy in the UK).

Each attendee received a Guild day packet with a copy of the programme, SoTA flyers, a novena for a Happy and Faithful marriage (published by Opus Dei), copy of Anointed! and a CTS leaflet re: booklets on the family highlighting Dr. Kahn's titles.

On this the Feast day of St. Benedict, we enjoyed Benedictine style hospitality with a delicious lunch provided to registrants. There was quite a buzz of conversation during the lunch period as people enjoyed the fellowship of other Guild members and friends. In many ways, I think this is possibly the most valuable dimension of the events. You get spiritually fed with Mass and in an environment which puts prayer at the centre of all we do, you get some top class, Catholic intellectual input, and get to mix with wonderful Catholic company!

The next Guild event  will be on 1st October, the eve of the Synod. The event will be held at Vaughan House, behind Westminster Cathedral in central London. The focus will be Prayer (the Rosary) with our families and for the Synod. Further details to follow shortly.

My friend Paul Abbott, famous Catenian officienado and bee keeping dentist, took some pictures on Saturday. I'll update this post with them as soon as he sends them over.