Archbishop Gänswein on Synod: 'Why do some pastors want to propose what’s not possible?' 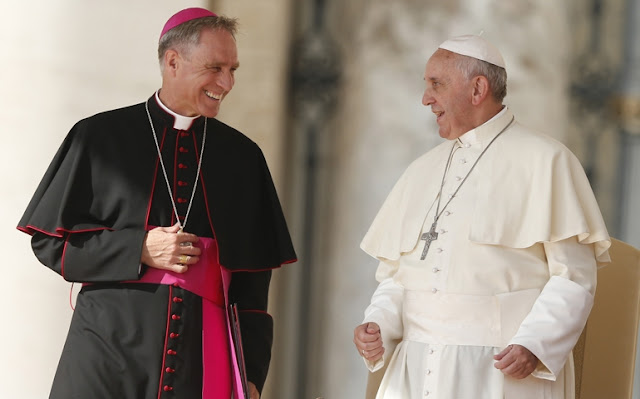 Archbishop Georg Gänswein has questioned why some bishops—particularly in his native Germany—are proposing the admission of divorced and remarried Catholics to Communion, when that step is "not possible."
The prefect of the pontifical household, who has worked closely with both Pope Benedict XVI and Pope Francis, also spoke about the similarities between the two in an interview with +1, a publication of the International University of Catalonia.
Archbishop Gänswein said that speculative theories about the resignation of Pope Benedict, which point to some pressure or motivation beyond the outgoing Pope's brief resignation statement, are "altogether devoid of foundation."
Despite the difference in approach between the two Pontiffs, "I believe that Francis thinks about it the same way" as his predecessor, said Archbishop Gänswein. "It’s not that he’s not interested in the fight against relativism, but he sees clearly that, in his pontificate, God is asking him to concentrate on other points, on other challenges."
Asked about the persecution of Christians, Archbishop Gänswein said that "the Pope is very clear on this point and, unfortunately, great institutions are silent or, if they speak, do so in an inconsistent way. And this is very grave. It’s unacceptable behavior. Up to now the Pope is the only convincing and courageous voice that says things as they are."
Turning to the upcoming Synod of Bishops on the family, he said:

Clearly the Church doesn’t close her eyes in face of the difficulties of faithful living in difficult situations. However, the Church must give sincere answers that are oriented, not to the spirit of the times, but to the Gospel, to the Word of Jesus Christ and to the Catholic tradition ...

A challenge is certainly Christians that are in a marital situation theologically called “irregular.” It means persons who have divorced and remarried civilly. We must help them, certainly, but not in a reductive way. It’s important to get close to them, to create contact and maintain it because they are members of the Church as everyone else, they are not expelled and even less so excommunicated.

They are supported, but there are problems in regard to the sacramental life. The Church must also be very sincere with faithful living in this situation. It’s not only about saying: “They can, they can’t.” And there, in my opinion, it must be addressed positively. The question of access to the sacramental life must be addressed sincerely on the basis of Catholic teaching ...

It’s true that not all the errors come from there [Germany], but on the point in question certainly yes: 20 years ago, after a long and laborious negotiation, John Paul II didn’t accept that remarried Christians could accede to the Eucharist. Now, we can’t ignore his teaching and change things.

Why do some pastors want to propose what’s not possible? I don’t know. Perhaps they give in to the spirit of the time; perhaps they allow themselves to be guided by the human applause caused by the media ... To be critical against the mass media is certainly less pleasing, but a pastor must not decide on the basis of applause or even less of the media. The measure is the Gospel, the faith, healthy doctrine, Tradition.

Archbishop Gänswein has expressed what every right thinking and informed Catholic already knows. So what on earth is going on, one has to wonder?