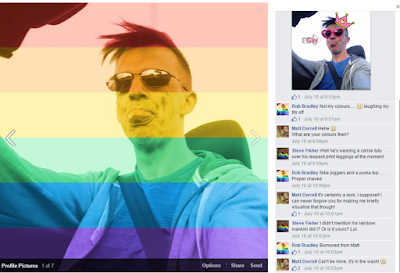 Readers may recall the heartbreak and tragedy at Our Lady of the Rosary, Blackfen, last September (which I covered here).

Back then, I noted how Fr. Steven's actions were very, very odd and in contrast to how, just a few years ago he was was the hero of the Latin Mass Society: he denounced the cowardice of his Diocese in changing the terms of reference of the Catholic Children's Society to accommodate gay/lesbian adoptions. It was also reported on Forest Murmers that he argued against the censorship of priest-bloggers on his own blog.

Well, it now appears that all our worst fears have become a reality. CC Father notes the public resignation of Steven Fisher as PP here and Joe Shaw reports on the tragic trajectory of this man here.

He clearly is in desperate need of our prayers.

Even if they showed more sensitivity than to publicly expose what they knew was going on, practically everyone knew this was going to happen when he was appointed. The big question for me is, if so many people knew, why on earth did the bishop responsible not know? Why did Steven Fisher accept the post when he was obviously compromised?  Why put someone in obvious spiritual peril in such a prominent, controversial parish without attempting to address his issues?

If Steven Fisher started a PGCE in September, he would have needed references weeks if not months before starting as well as police checks before doing teaching practice. Surely this means Southwark Archdiocese would certainly know about it?

“The following are obliged personally to make a profession of faith according to the formula approved by the Apostolic See:
1/ in the presence of the president or his delegate, all those who attend with either a deliberative or consultative vote an ecumenical or particular council, a synod of bishops, and a diocesan synod; the president, however, makes it in the presence of the council or synod;…
6/ in the presence of the local ordinary or his delegate and at the beginning of their function, parish priests, the rector of a seminary, and teachers of theology and philosophy in seminaries; those to be promoted to the order of the diaconate;..”

So - when Steven Fisher was appointed Parish Priest of Blackfen, did he make a Profession of Faith in the presence of the Archbishop or his delegate?

If he did, was he already planning to become a teacher, did he perjure himself?

If he did not make a Profession of Faith, was this because:

Now, what if there were some photographic diocesan record of this. Like this say? 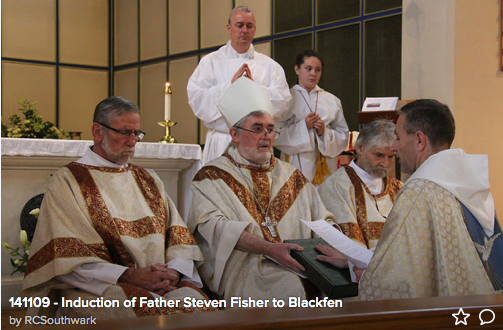 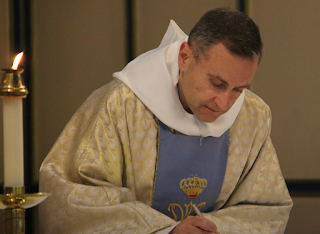 The People of God in Blackfen deserve some answers to these questions.

Perhaps the bishops need secular confidants they can turn to with issues like this, people who will be honest with them and pull no punches? I've noted before how people often bow and scrape before bishops and are frightened of being honest. Ultimately, this whole thing has been handled absolutely dreadfully. The resultant scandal has done undeniable damage.

It is clear that at the time, questions to the Archdiocese from the laity went completely unanswered. Why do the Archdiocese feel they have no responsibility to the faithful? What do they think now that those concerned parishioners fears have come to pass? Is an apology in order perhaps? Some intervention or explanation? Or will the clergy merely close ranks and shut out their sheep once again?

Steven Fisher is now pursuing a career as a teacher apparently, what school is he going to? Should they not be warned?

More questions for our hierarchy that will never be answered.

Our Lady of the Most Holy Rosary, Pray for us!

Blackfen Our Lady of the Rosary Steven Fisher