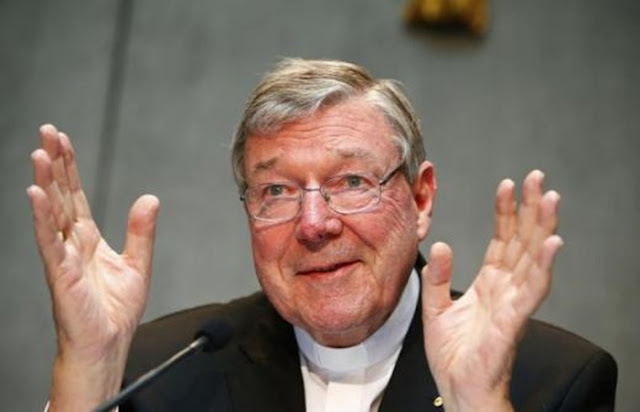 Cardinal Pell is at it again, teaching the Catholic faith, holding true to the deposit, taking back out social capital! Thank God for him!


The cardinal said the culture wars are entering a new phase which can only be fought by lay people
The Vatican’s Secretariat for the Economy has said that the outcome of May’s same-sex marriage referendum in Ireland and the decision of the US Supreme Court on the same issue clearly show the extent to which Western society is abandoning many of its Christian legal foundations.
In his address at the Fota VIII International Liturgy Conference in Cork, Cardinal George Pell called the Irish referendum “a victory for John Stuart Mill and utilitarianism.”
He told the conference delegates and speakers that the so-called culture wars “are entering a new phase of political struggle which can only be fought by lay people.”
Speaking about the importance of recovering the mission of the laity and drawing from St John Paul II’s 1988 document, “Christifideles Laici,” Cardinal Pell said the struggle will be over the preservation of religious freedoms such as the right to teach Christian doctrine publicly in parishes and schools, especially in those institutions that receive state funding.
“We shall have to struggle peacefully and democratically and cooperatively to ensure that our hospitals cannot be forced to offer abortion and euthanasia,” he said.
In his address, “The Vine and the Altar: Learning From the Teaching of St John Paul II on the Priestly Role of the Catholic Laity,” the cardinal said the separation of church and state did not legitimise in any way any right of governments to be anti-religious or to diminish or intimidate the Christian community.
Speaking to CNS after the conference, which was organised by St Colman’s Society for Catholic Liturgy, Cardinal Pell referred to the fact the Church had had to surrender its rights in Catholic adoption agencies in Britain and Northern Ireland.
“I anticipate in many, if not all, the Anglophone countries the struggle to maintain our religious freedom will continue and possibly even intensify,” he said.
He urged young people to get involved in political life and warned the laity against fleeing from the world and instead becoming preoccupied with church services and tasks of the priesthood.

“We don’t need watered down and uncertain priests, and we don’t need lay faithful who seem determined to fill the gap,” he said.

[Go Cardinal Pell!! "Podfathers", pacifiers, liberal apologists take note!!]
On the October Synod of Bishops on the family, the cardinal told CNS, “We’ve got no warrant to change the teachings of Scripture.”
He also said he felt there was “a lot of good news” concerning Vatican finances.
“We’ve made very significant progress, structurally with a number of appointments. I think we now have a good idea of what is happening financially in the Vatican. That is a big start,” he said.
The Council for the Economy will meet in mid-July. After that meeting, the 2014 accounts and 2015 budget will be published; all will be certified by all the sectional heads in the Vatican and will have been compiled according to contemporary accounting standards.
But Cardinal Pell sounded a note of caution: “We’re not home yet; we’ve got the structures in place; we’ve got to make them work. There are pockets of incomprehension and resistance still.”


"He also said he felt there was “a lot of good news” concerning Vatican finances."

It means that the Vatican does not need to go cap in hand to the German Bishops to keep the books balanced!
Cardinal George Pell Gay marriage SSM The Catholic Herald