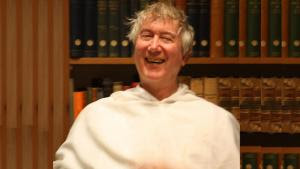 You may recall some of the concern expressed about the legitimacy of having Fr. Timothy Radcliffe, a name synonymous with dissent from Catholic doctrine, headlining at the Flame Youth event. Fr. Radcliffe is a priest in good standing, but has publicly expressed some very dodgy ideas.

Fr. Timothy used his address to the Divine Mercy Conference in Dublin as an opportunity to criticise the traditional Catholic understanding of the importance of teaching fellow sinners dogmatic and moral truths that safeguard the divine truths entrusted to the Church by God the Father, God the Son and God the Holy Spirit.

Fr. Timothy expressed the hope that Pope Francis will allow divorced and re-married Catholics to receive Holy Communion, despite this being a doctrinal contradiction?

Fr. Timothy who is one of the celebrants of the controversial Soho Masses?


“How does all of this bear on the question of gay sexuality? We cannot begin with the question of whether it is permitted or forbidden! We must ask what it means, and how far it is Eucharistic. Certainly it can be generous, vulnerable, tender, mutual and non-violent. So in many ways, I would think that it can be expressive of Christ’s self-gift. We can also see how it can be expressive of mutual fidelity, a covenantal relationship in which two people bind themselves to each other for ever.”

The wonderful Father Paul Nicholson has been reading Father Timothy's book "Why go to Church". He is seriously unimpressed with what he has found there and states categorically that Fr. Timothy's errors need to be corrected in this homily:

Father Lawrence Lew O.P. is not impressed by Fr. Paul's criticism however and states:


In his video, Fr. Paul claims that Fr Timothy makes the parable of the Prodigal Son "say what it does not say", namely, that at the beginning of Mass when we say the 'Confiteor', we're absolved of grave (ie: mortal) sin. Well, it appears that Fr Nicholson is making Fr Timothy say what he does not say. Because, I am sorry but I cannot find the alleged assertion by Fr Timothy in his book 'Why Go to Church'.

The parable is referenced in the first chapter, entitled 'Homecoming' from pp20ff. The point of using the parable is to show the humility that is needed if we're to 'come home' to God and enter into communion with Him and one another in the Mass. He thus says: "When we confess our sins at the beginning of the Eucharist, we both throw away our dignity and proclaim it" (p24).

He then explains that this means putting aside our false sense of self in order to see ourselves as God sees us: as His beloved children called to the life of grace and holiness.
Now, it is true that at p27, Fr Timothy says: "the Eucharist is the ordinary sacrament of forgiveness." Fr Nicholson modifies, or adds to this, by saying [at 2'40" in his video] that "the Eucharist is not the ordinary sacrament of forgiveness for serious sins". The problem is, Fr Timothy never said the Eucharist forgave serious sins. It is Fr Nicholson who imputes this. And then, on the basis of his own imputation he makes a video which he widely disseminates... This is, at least, an uncharitable reading, somewhat libellous, and might even amount to the grave sin of detraction!

I agree that to see the Eucharist as the "ordinary sacrament of forgiveness" is an untypical statement. But is it heretical? It would be if it denied the place in the sacramental order of the Sacrament of Confession as being necessary for the absolution of grave sins. This, it does not do. So, what might its meaning be, given that we know the orthodox doctrines of the Church?

I suggest that Fr Timothy wants us to see that in each Mass and worthy Holy Communion, we're forgiven of those venial sins for which we're sorry, as Pope St Pius X said. And, Fr Timothy thinks, the "feasting" of Holy Communion is a sign of that forgiveness from God and our reconciliation with him. It is, indeed, a foretaste of our eternal union with God. Hence, "the feast is the forgiveness" (p27).

Certainly I agree that Fr Timothy is not writing a dogmatic tract nor re-writing dogma in this book, rather he is giving a spiritual reflection on what Mass is, and why it's important. His use of stories, images, and Scripture to draw out the depths of the Mass do have some merit. However, at a time when it is broadly acknowledged that the faith has not been taught and many people are completely unaware of Church teaching, do we need to hear voices that openly contradict doctrine and mislead the faithful into thinking such positions are legitimate? Such outlandish interpretations only result in encouraging a culture of relativism when what we need to be doing is giving the faithful confidence in the truth of what the Church teaches, especially in the face of growing pressure on issues like "Assisted Dying" and "Gay Marriage". If those who speak for the Church are working to undermine the legitimacy of doctrine, people will simply conclude that they don't need to include the Church's position on these issues, they will make their own mind up, after all, what the Church is sending out is mixed messages.

Far from exalting Fr. Timothy and giving him a public platform, the CBEW should surely be embarrassed about his open hostility to Catholic teaching? The result of such vocal opposition is only to erode the authority with which the Church speaks on issues such as human sexuality and social justice.

Thank God for brave pastors like Fr. Paul who are willing to call out error for what it is!