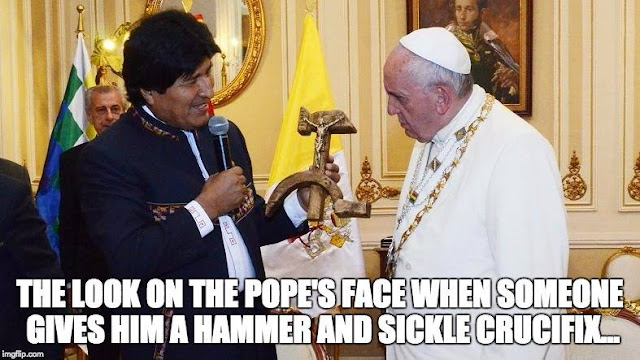 You might, like me, have thought that this was some cheap political trick by the Bolivian President, Evo Morales. Certainly, the Pope appears very aware of the inappropriate nature of this gift, even saying to the President "that's not right!" (video here). As Pope St. John Paul II said back in 1978:


It is wrong, to state that political, economic and social liberation coincides with salvation in Jesus Christ.

However, there is a little more resonance to it than first meets the eye.

Spanish new outlet La Voz explains that the cruciform hammer & sickle is actually a replica of the cross made by the Spanish Jesuit priest Luis Espinal, murdered in 1980 by paramilitaries for his commitment to social struggles in Bolivia.

After his arrival in Bolivia, Pope Francis made a stopover in the place where Fr. Espinal was riddled with bullets.


"I stood here to greet and especially to remember. Remember a brother, a brother of ours, a victim of interests that do not want him to fight for the freedom of Bolivia," said the Pope.

Having tracked the story down in Spanish, I was disappointed to find out that over at Crux, John Allen already had some interesting historical observations on the socio-political landscape of South America and how papal visits have affected that landscape over the years here. As Allen puts it:


if Morales knows his recent papal history, he might be feeling a little nervous right now.